Villgust was a Bandai franchise that started out as Gashapon figurines, but later expanded into manga, light novels, media books, and two games. The franchise is based around a relatively generic fantasy world, and one of the perks of the figurines was that you would be able to change their equipment or “level up” by collecting stickers and other things from the gashapon machines.
I don’t know much about the franchise as a whole, but the Super Famicom game seems like it was handed off to some bored developers who didn’t really care about the project and just hurried something out before the fad ended. It’s a lazy, uninspired, bland game that is nothing but RPG cliches and the most basic RPG gameplay. Right off the bat, they can’t even get the spacing of lines in the windows to look good: 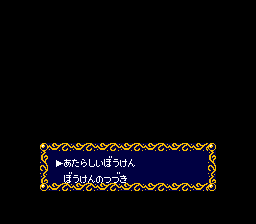 Start the game and there’s a short cutscene:

Shun and his girlfriend Michiko leave school, Michiko sees a white rabbit, and they’re suddenly warped to a fantasy world. Immediately Shun meets 4 adventurers (I guess) who join him, and the game starts. Who are these adventurers? Perhaps their backstories are in the instruction manual, and I know that if you watched or collected the other media you can see some of it, but in the game there’s nothing beyond their names and appearance. Why can Shun fight? Who knows. Here are the first five characters you use:

You’ll notice that 4 out of the 5 characters use swords. I guess they were constrained by what had already appeared in the Gashapon series, but that was consciously based on video game RPGs. Isn’t a variety in weapons usually a staple of such games?

Anyway, the story of this game is nearly nonexistent. For about the first half of the game you’re supposedly trying to find Michiko, but what you’re really doing is taking each town in sequence, going to whatever dungeon is near the town, and beating the boss inside, then going on to the next town. Every so often they offer a flimsy justification, but your characters talk so little that there’s no way to know why they’re doing all this. Finally about 1/2 or 2/3 of the way through you get the overall story. Shun is a chosen one who has been summoned to the world to defeat an evil demon who is going to revive soon. Sigh.

The battle system is just attack attack attack. This game has a common RPG issue that the magic users don’t have enough magic points, so you tend to save their MP for healing spells or bosses, and the rest of the time it’s just fight. The animations in battle are pathetic; all enemies attack by their sprite disappearing and reappearing near the character they are attacking, with no animation. Spells cause some little effects to come out, but that’s it. Your guys have a small animation when they attack, but their sprites also disappear and reappear.

Another quality of this game is the inflation of the numbers. As you can see in the screenshot above, they start at level 0 with 70-80 HP. The first sword you start with has 6 attack power. By the end of the game your guys have 50,000-60,000 HP. The best sword in the game has 10,000 attack power. In the end this makes no real difference because enemy HP and attack values also scale up to match you. But I don’t think I’ve seen another game with that much difference between level 1 and endgame.
The text is annoying to read. It uses fewer spaces than most of the all-kana games, and there’s also no punctuation. So you get text boxes like this:

There is also a lack of any confirmation dialogs or prompts. When you buy something, it just exits the menu without confirming you bought it. At least the game doesn’t let you buy something if you already have it equipped on that character or if it has less power — of course, this means that none of the weapons and armor have any effect beyond raising your defense, so there’s never any choice for what to equip.

On the whole this is a hard game to blog because everything is the same. All the towns have the same assortment of stores, which all look exactly the same on the inside. There are palette swaps of various types of people wandering around (who you can walk through for some reason). They give you very little information about the individual town or the world, they just comment on where you’re going next. Your party members rarely make any comment, and when they do, it could have been said by any of them. Bosses in the dungeons just appear out of nowhere, with no more motivation or existence than “I will defeat you!” So a step-by-step journal of this game would be repetitive and boring.
Eventually you sail to a second continent, where Michiko has been taken. This is about the halfway point of the game, so I’ll stop here. I’m about 80% through the game so the next post will probably be the final one; the second continent has a little more story….if “A group literally called ‘darkness’ is taking over the world and we have to get three items to stop them blah blah blah” counts as a story.
To be honest, this GameFAQs review from 13 years ago is pretty much exactly how I feel about the game.