I have to apologize for this post; I didn’t take as many screenshots or notes as usual so this is a little thin. Maybe I can use the excuse that if the developers didn’t care about this game, why should I care about this post? Nah.

As I suspected, this didn’t take very long. I mentioned in the last post that you go to a new continent (with no animation at all, you just disappear, supposedly take a boat, and are instantly in the new place). You then begin switching back and forth between two parties; the one from the beginning, and this one: 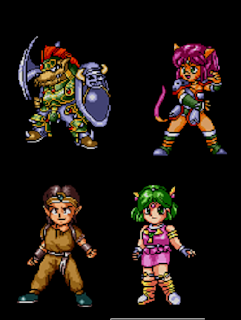 At least this party is a little more varied in its weapon use (axe, claw, boomerang, staff), but they’re just as generic as the first party. Other than their names, you learn nothing about them. Every so often they interject some bland lines but that’s about it. At least the boomerang hits all the enemies. But this party switch can be annoying because sometimes you upgrade your party’s equipment, using all your money, and then it switches to the other party.
The new continent is indistinguishable from the old one. The towns look just the same, with the same buildings. You continue to visit each town, then the dungeon nearby or in the town, then move on. The villains, although they’re now more connected to this “darkness” group, still appear out of nowhere in the dungeon, say two lines, and then you fight them.
So once again, there’s a limit to what I can say about this without becoming tedious. Basically the idea is that Baros, the leader of darkness, is looking for three items so he can revive some dark god. Michiko (your girlfriend) is also involved in this somehow; he needs her to perform some sort of ritual. So you’re trying to find the three items before Baros does.
The only twist comes when you fight Rushizu, who kicks your ass. Afterwards, you find Michiko’s school uniform in her room, and realize that somehow Rushizu is actually Michiko. Dun dun duuun! (Actually it turns out it’s just a copy made from Michiko’s memories)
At about 3/4 of the game you run into an annoying problem. I mentioned in the last post that HP and stat numbers are on a huge scale. Unfortunately the heal spells and items heal a fixed HP rather than a percentage. There’s one dungeon in particular where the boss does an earthquake attack that hits everyone for 4-5K damage. Your best healing spell heals 2000, and your best healing item heals 5000. There are no party heal spells or items in the entire game. Given the lack of strategic options in battle, all you can do is grind levels until you can beat the boss without healing before you die. A good example of poor enemy design in an RPG. Fortunately after this you get the 20K heal spell which is useful up to the end.
Let’s jump to the final dungeon to get this over with. Eventually you reach the point where Baros has all three items he needs to revive the dark god, and has Michiko in the temple. You’ve managed to open the door as well as find the bell that will disrupt the ritual. Throughout the temple you get the best equipment for Shun as well as see your other party members fighting (one odd thing is that there are only two equippable armors for Shun in the entire game — the Leather Armor he gets near the beginning with a defense of 20, and the Dragon Armor in the last dungeon with a defense of 4000.)
Then, one by one your party members leave to hold off enemies, leaving Shun to battle the final bosses himself. Although this might seem like a poor decision, whether you have 1 person or 5 your viable options are limited to attacking and healing (and maybe the defense up spell), so tactically it makes no difference.

I was at level 67 by this point, and Baros went down fairly easily. He had a lot of HP but Shun has the 20,000 HP heal spell so it was just a matter of attacking a few times, healing, rinse and repeat.

With Baros defeated, Shun tries to rescue Michiko, but of course Rushizu is still around.

Rushizu is far stronger than Baros, so you have to do some tricks to beat her. First, if you show her Michiko’s school uniform, it stops her for a few turns. If you use the Mirror Shield, it lowers her defense enough to allow for you to do reasonable damage.

After that it’s the same as the Baros (and all the other bosses in the game) fight — attack and heal until you win.

The ending scene is very short, and ignores almost all the side characters, although since they were ignored through the entire game, there’s no reason to focus on them at the end.

After being told by Undine that you successfully stopped the rise of the dark god, you are sent back to Earth.

They throw in a little trick at the end, where Ryukia, the cat girl from above, has somehow been transported to Earth as well, and turns into a cat. What does that mean? Who knows.

Then the credits roll over the cat picture and that’s it.

I mentioned before that this is a rough time for this blog, with 5 “kusoge” (shitty games) in a row: Maka Maka, Villgust, Light Fantasy, Fist of the North Star 5, and 3×3 Eyes. That’s two down, three to go. Villgust review to follow later in the week, although as I said before, this GameFAQs review is very accurate.
By the way, if any readers have seen the Villgust anime, I would be interested in hearing thoughts on that.