Last time I was heading into the Imperial capital, Bow. Bow is kind of odd because it seems like it’s just a big building — maybe we’re supposed to imagine it’s bigger or has more structures, but I’m not sure. In any case, the goal of reaching here was to find the great smith Uto, who had the secret of the Sword of Filerna. 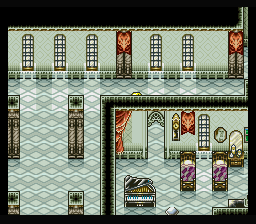 Uto is in the basement, but he doesn’t believe Filerna’s story, until he fights her and sees her sword style. Then he reveals what he has been keeping — the Sword of Filerna can cleanse the sea that the Empire fouled, and will restore the kingdom of Firosela. So that’s now our goal, but the Black Demons have caught up with the party as well and once again we have to escape out of a secret underground passage.

Incidentally, a problem a lot of games and anime have with story consistency is how to have powerful villains that don’t just instantly crush the heroes. Most of the time this is done by making the villains incompetent for no reason, or they use nonsensical things like “Let’s not kill him now, let’s see how he progresses. Mwahaha.” or “There would be no point in killing you, you’re too weak. Mwahaha.” This game definitely leans on the incompetent villains trope.

Better stories like Lord of the Rings use more coherent reasoning — Sauron doesn’t have the ability to warp anywhere in the world or make meteors strike Frodo. That quest succeeds partly because they play on Sauron’s blind spot (not thinking anyone would try to destroy the Ring), and using a small party that wasn’t based on combat ability. Sauron never quite learns where Frodo is or what he’s doing until the last moment. 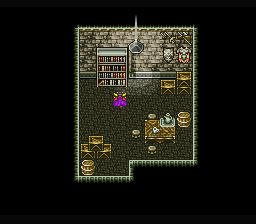 So we escape through the basement, and fight yet another Black Demon (#22). The next goal is to head south to where Firosela was. We pass through a town and near a locked windmill shed, eventually reaching an empire military base. 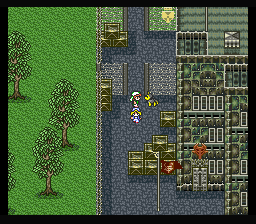 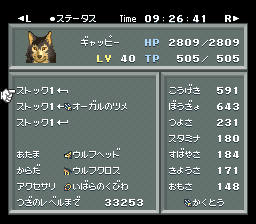 We have to head back to the windmill and get some imperial clothing disguises; it also turns out that Yakos, the man there, was a Firoselan, and is happy to see that Filerna lived. He’s sick and probably won’t live to see the revival of Firosela, but at least he can help us proceed. Unfortunately the soldiers find us out pretty quickly, and we have to fight. Two of the top-tier Black Demons appear here; this was a big chokepoint for me where I had to move up about 6 levels to proceed (until I learned a better Crystal attack). Fortunately there is a heal spot in the barracks. 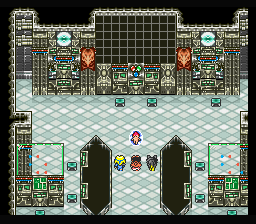 Afterwards there’s a strange looking baby creature in a bubble that flies away, but no explanation for that now. But now we can pass the military base and finally reach the place where Firosela was. Filerna tries to cleanse the sea with the Filerna sword. 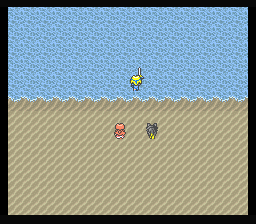 It makes the castle rise up that we saw in the flashback earlier. The door won’t open unless two Firoselans touch the statues, but if a non-Firoselan touches them they will die. We head back to the windmill to talk to Yakos — the rest of the game contains an annoying amount of backtracking. Yakos is too sick to go help us, but he notices that Lila reminds him of a Firoselan, and a fortune teller seems to confirm that she is Firoselan. It’s dangerous, but they try having Lila open the door, and it works. 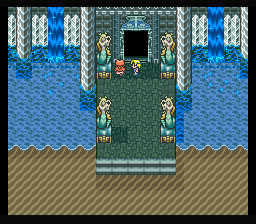 Inside, Filerna learns that she needs to revive 6 lighthouses to be able to proceed and make a miracle happen. This part is mostly just wandering around, backtracking, and some fetch quests to make the lighthouses activate. Midway through, we head back to Bow having heard that the High Priest there is the true ruler of the Empire, and if we beat him it will severely cripple the Empire. On the way, we learn that the Resistance Armies have grown by a lot, all of them being inspired by this unknown “Filerna” that they’re hearing about. It turns out that this is all being spurred by Nest, the scenario writer we met at the beginning, who has been publishing an underground newspaper. He joins up to go deal with the high priest.

The high priest is underground in Bow, and we also find a place where they are experimenting on people (this is what they were doing to Fis much earlier). And in fact Fis is here, and fights us, but stops after a few rounds and instead decides to sacrifice himself to destroy the lab. We continue on to beat up the high priest, who actually is very easy to beat.

Once we activate all the lighthouses, the miracle is an ice boat that comes up. 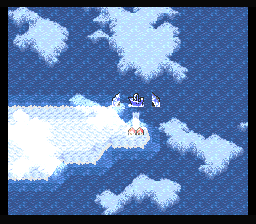 We need to use this to go to the final area, the place where the Black Demons have their command HQ.

The final dungeon is a tower, and the final bosses were another chokepoint so it was time to grind (I was tired of these chokepoints and used a code this time to move up 4 levels).

After beating the last of the black demons, the story takes a strange turn: 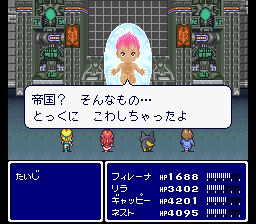 The fetus(?) tells us that it’s already destroyed the Empire for creating the abominations, and that now it’s just looking for a place to be born — the Heart of Hatred has captured the Pot of Life, and so we need to beat the Heart to allow this thing to be born. I don’t know what this has to do with the rest of the story (I checked another blogger who did this game and he also had no idea where this came from, so I didn’t miss anything). 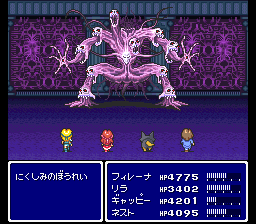 The boss is not especially hard at the levels I was at (I think it’s easier than the final Black Demon fights). Upon being the boss’s two forms, we restore the Pot of Life, the source of all life of the planet.

Now Filerna goes back to restore Firosela. We’re followed by some last remnant of the Black Demons, but when Filerna uses her sword in the ocean, Firosela is reborn and the thing dies. 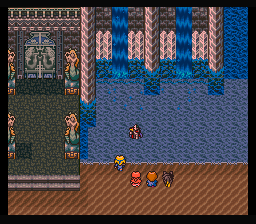 Now Firosela is destroyed, and Lila seems to become the queen with Filerna. Is this the first lesbian relationship in an RPG? There’s no dialogue here but Lila is pretty insistent that she’s Filerna’s wife, throughout the whole game. I found a post of someone talking about the original novel and it does seem to imply that Lila is in love with Filerna. 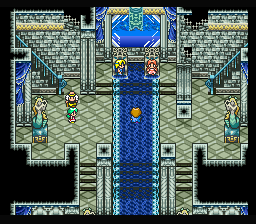 Overall it’s an OK game. Interface annoyances and chokepoints are troublesome, but the skill system is interesting and the story is overall well done for a game of this period. 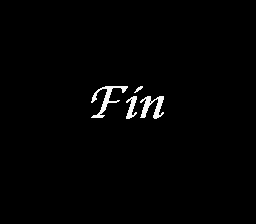 Next up is Last Bible III.