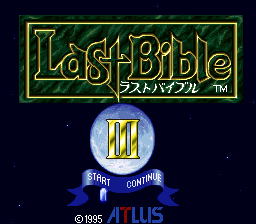 This is another game in the long running Megami Tensei franchise. By this point, there were five main Megami Tensei games plus the two Majin Tensei strategy RPGs. The Last Bible series was a spinoff that started on the Game Boy in 1992. The idea was to take the core idea of monster recruiting and combining, but put it into a more kid-friendly fantasy setting that eschewed the usual darker, post-apocalyptic settings of the main games. (The first two games were remade for the Game Boy Color, and the first one was released in English in 1999 as Revelations: Demon Slayer.) The games are also standard top-down RPGs rather than the first-person games of the main series.

This game has an English patch, so you can try it yourself.

1995 actually had three games released in the Bible series — Last Bible III, Another Bible (a strategy RPG which I covered on my other blog), and Last Bible Special, a game gear game that went back to the first-person dungeon style. This was a busy year for the franchise; 1995 is also when SNES remake of the first two games came out, as well as Devil Summoner for the Saturn.

I played the first two LB games quite a while back, but I don’t remember much about them. Of course because this is on Super Nintendo (and released in 1995) the graphics are much better: 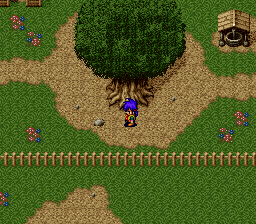 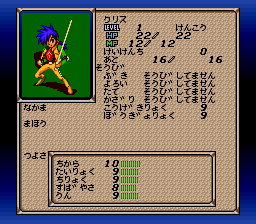 The text can be annoying to read at times because they have mixed kanji and hiragana in words — I’ve played enough of these old games that I’m used to reading all hiragana text now, but having a mix of the two really throws off my speed. 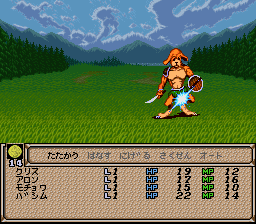 The story overall is much more developed than the previous games. It begins with a flashback to a group of “Shadow Walkers” who were heroes of a big war 15 years prior. One of them is Glen, the main character’s father. Another, Alec, is about to die in the snow but reaches a gate to the Makai (demon world). Now 15 years later, the Shadow Walkers are being targeted by the government of Megapolis, who has made a perpetual energy machine but at the same time outlawed the use of Gaia (a kind of magic power) by anyone. At the moment, Kurisu (the main character) is outside their purview, attending a school where he is taught to use his Gaia along with his friends. Soon, the Megapolis soldiers attack the town, and Kurisu is forced to flee. The story takes Kurisu through a fight against Megapolis while at the same time trying to figure out the mystery of the Shadow Walkers. 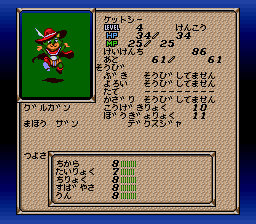 (The main character gains Gaia techniques from the school at the beginning, but I never found out how to actually use them. I was obviously missing something in the system because for me they always did 0-5 damage but I saw videos where people were using them for 400+ at the end of the game.) 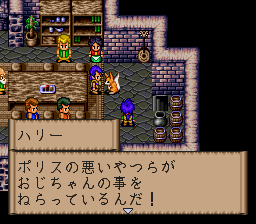 The battle system is normal, but as is so often the case in these games, the game is virtually ruined by the unbelievable random encounter rate. This is my 72nd SFC game on this blog so I’ve seen a lot of games with high encounter rates, but this is one of the worst. The saving grace is that once you recruit monsters to your side, you can then talk to the monster type and the battle will end — even with this, though, it’s very tedious to go through the dungeons. And there are several places in the game where you only fight human enemies you can’t talk to — these places really sapped my will to play. 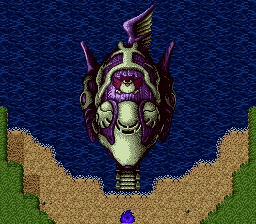 This is coupled by a poor balance throughout the game. The game goes from being very difficult to very easy. I reached the final boss around level 34 and got obliterated. I did grinding up to level 43 and tried again, and got obliterated. At this point I was so tired of the game I used a cheat to beat the final boss; I then went looking for guides and videos and found that most people recommended levels in the low to mid-50s (and they actually knew how to use the Gaia techniques of the main character). So I was supposed to grind 20 levels to beat the final boss, which is absurd. 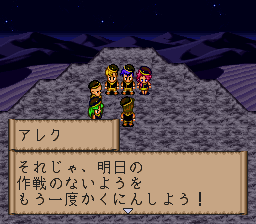 The high random encounter rate coupled with rare/expensive MP restore items means that, as usual, magic is nearly worthless other than heal spells. I also found that in general the magic didn’t work very well.

As this is a Megami Tensei game, you can recruit monsters to your side. I think this is the best implementation yet of monster recruitment. You are still doing the usual “answer questions” system, but you can see both the mood of the monster and the connection level change as you answer, which means you can actually see what your answers are doing and it feels much less random. There’s also the normal monster combining. As with Shin MT2 and If…, I found usually the preset characters were better than the monsters. 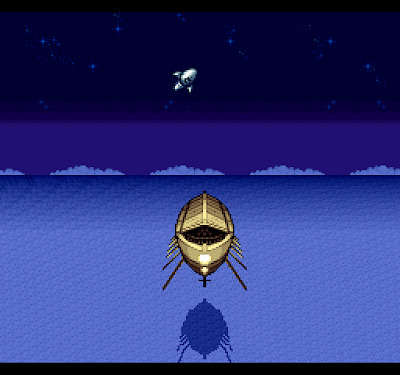 This is a pretty harsh review, but I think it’s deserved. I was really disappointed by this game; I was expected another decent entry from Atlas. The world is interesting and the story is pretty good, which is a good basis, but the absurd random encounter rate and the sheer amount of grinding required makes the game a chore to play, and I got to the point where I was no longer caring about the story that much because I just wanted to get the game over with. 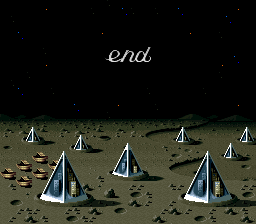 Now after I wrote this, I went looking for more information on the main character’s techniques, which I probably should have done during the game. Apparently you can increase the MP cost to do more damage. I wonder if I can go back and beat the final boss without cheating now, although it was mostly that I couldn’t survive his turns where he would attack 6-8 times doing several hundred damage to each person.

Anyway, if any of you have played this game maybe you can tell me how to suck less at it — I don’t think it will change my opinion on the encounter rate but maybe at least the balance won’t be such a problem then.

Next up is Vandal Hearts on my other blog, then we’ll come back here to an odd looking game, Love Quest.