Early 1992 saw two attempts to put stronger RPG elements into the emerging SRPG genre. This is the first one. Rather than following the example of the first Fire Emblem, which simply had a sequence of maps to play in order, this game has some optional areas that you can grind in, as well as towns.

With the exception of the remake of this game, FE never tried this style again, and probably with good reason. This game feels odd to play, and there are a lot of frustrating aspects to the game. The RPG elements are rather shaky. The towns themselves have very little to offer (especially since there’s no money or shops). There’s essentially no RPG-like exploration, with the except of the last dungeon and one or two other small places. The equipment and item system is also not especially well implemented, with no useable items and only one equipment slot (for a weapon or armor). Now, it may not be fair to criticize FE Gaiden for this — I don’t know what the designers were aiming at in their decisions.

But honestly this could have all worked out well, but design and balance problems plague the game as well. There are a lot of maps that just feel unfair — with your guys spread out all over the place and high movement flying units that are hard to protect your weak units from. The increased range of bows is nice for your side, but when the enemies have bow knights it can really exacerbate this problem of not being able to protect the units on your side. The warping female mages add to this randomness.

The plot is a mess, but I’m not going to fault a 1992 game too much for the story. On the whole, this game just didn’t feel fun. The first Fire Emblem, despite its flaws, was (for me) an enjoyable experience. This game was not. I commend the designers for trying something new, but it just didn’t work out.

The music is not bad, though.

Finally, I forgot in the introduction to scan some pages from the manual. First off, here’s the map:

Then, there are the usual pictures of the characters. This was important in early games because you sometimes couldn’t tell what they were supposed to look like just from the in-game graphics. I’ll just put the pages up with Alm and Celica. 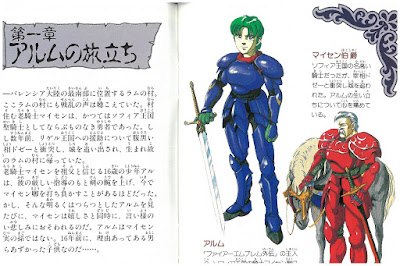 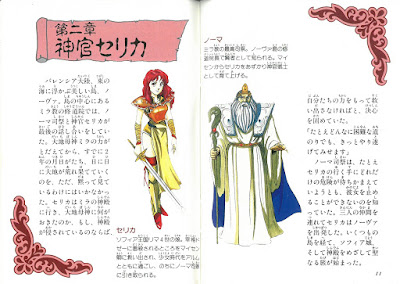 So that’s FE Gaiden. The next FE game will be after another ten games or so. Next up is the other game which was influential in creating stronger RPG elements in SRPG games — Shining Force.