This game is really bad. In addition to all the stuff I said last time, everything seems designed to go as slowly as possible and take as many button presses as possible. When you use a heal technique, it completely exits you out of the menu so you have to do A->Tech->Character->Heal->Target each time you want to use the heal. This makes it very annoying to heal up between battles. Of course as usual you can’t see the stats of equipment when you buy it. I don’t know what most of the items do because the documentation for this game on the Internet is very scarce.

Also they obviously didn’t program a way for an NPC to give you an item, because whenever that’s supposed to happen, they tell you to search a treasure chest nearby. You can tell when you’ll be getting an item in the future because there’s an empty chest lying near a person.

At least the enemies say “ABESHI!” when you kill them.

Our next destination is to meet Tentei Rui, another character from the second part of HnK. She’s blind, and wants to find Shuu, who is also blind, to help. So off we go to Hakuronost, where Shiba (Shuu’s son) is waiting. He takes us to beat the Black Clan. In the show, Shiba dies in an explosion. Here he intentionally throws himself into a bomb trap to set it off before it can get us. Another character gone.

But this lets us heal Rui, by the power of Shuu and his son (which is residing in him or something like that). On the mirror behind her we see what is supposed to be Rin, although who would know without being told. 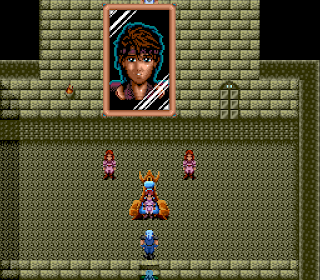 So now let’s go find adult Rin to help us out.

It turns out, in another bizarre twist, that the main character is Rin’s long lost younger brother. I saw one site that said this plot seemed like 30 elementary school kids pooling all their ideas in a few days. The timeline makes no sense. During the story we discover that Estelle (main character’s wife) is the daughter of Makoutei, who only revived recently. In the opening scene, Estelle is captured while pregnant. By the time you meet the child about 1/3 through the game, he’s old enough to talk and study martial arts, and eventually is a playable character. Also somehow your main character is younger than Rin. None of this makes any sense.

Anyway, the problem now is that there’s a mist hanging over the continent that blocks you from going through. But fortunately the necklace the main character has lets you walk through it, so you can visit the towns underneath. The large goal of this section is to find Estelle, who is in the keeping of Gran Doll.

At a black gate, we meet Bat, another character from the original series. He starts out as a young boy following Kenshiro around, and then is an adult for the second part. Here, when you meet him he’s already nearly dead, and sacrifices himself by ramming a truck into the gate to blow it up so you can enter!

At Phantom Land they are having a funeral for Estelle, who was killed by Gran Doll. Makoutei fears Estelle and Kurisu’s child because he’s a combination of Makoutei and Tentei blood.

Next it’s time for a prison where various numbered people are being held. One of them is the main character’s son, who you get to name. I chose Atatata because I didn’t realize he was going to be a major figure (he was just a baby!) but now that’s going to be him for the rest of the game. Oh well. Now it’s time to deal with Gran Doll.

After another bland, featureless, long dungeon, Gran Doll appears. One common feature of bad RPGs is battles that can’t be beaten except by levelling up because there aren’t enough strategic options. Gran Doll has a brutal all-attack technique that he spams. At this point we don’t have any multi-heal techs and the heal tech we have barely heals more than Gran Doll does. So essentially you just have to grind levels until you can beat him before he kills you.

It turns out that Gran Doll was ordered by Makoutei to kill Estelle as a baby, and refused to do it. Makoutei ordered him to do it again, but instead he hid Estelle in a hut in town. Rei takes Estelle to “safety” in Rihaku City, but Makoutei immediately attacks it. We hurry back to Rihaku City but it’s too late. Shuu was able to get everyone away from Makoutei, but Estelle sustained critical wounds and dies as Kurisu watches.

Atatata goes off to train with Rei, and we head to the next continent with Shuu. For some reason Akashachi (the head of Red Pirates) lets you use their ship for free, with no conditions.

The goal at this point is to find various Nanto and Hokuto users so that we can unite to defeat Makoutei. Rumor is that the current master of Hokuto Shinken is holed up in a tower…