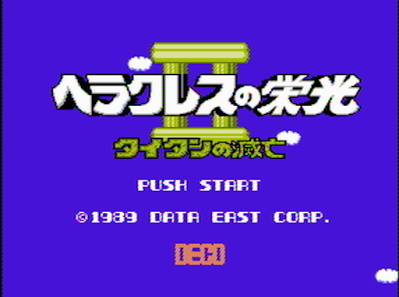 When Data East released the first Glory of Heracles in 1987, console RPGs were still in their infancy. You had the first two Dragon Quests, two Deep Dungeon games (first-person maze crawlers), and a number of action-RPG hybrids like Hydlide and Adventure of Valkyrie. So there weren’t a lot of established rules for how the console RPGs should work, and Glory of Heracles has a lot of oddities in its system.

In late 1989 when Glory of Heracles II was released, the situation was totally different. Since the first game, there were many other DQ-like games released for multiple systems: Dragon Quest III, Final Fantasy I and II, SaGa 1, Phantasy Star II, Mother 1, Tengai Makyo, and others. The Dragon Quest clone had become fully established as the dominant console RPG style, and Glory of Heracles II follows the pattern. All of the oddities of the first game are gone — the durability of weapons and armor, the passwords that don’t preserve which bosses you’ve beaten, and overworld and towns on the same field, for instance.

The wikipedia article says that what did make this game stand out was the Greek mythology theme, as well as the tragic story that was somewhat more developed than other games at the time. 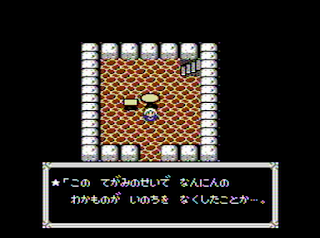 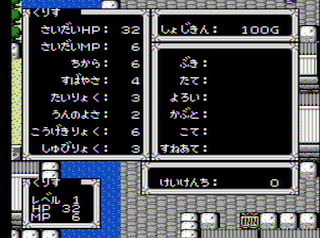 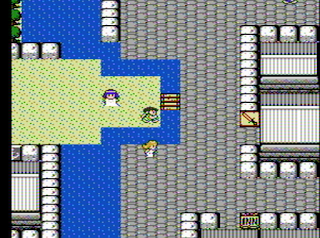 The game begins in the town of Nana, with naming your hero, and then talking to a girl and naming her. The hero (Kurisu)’s grandmother has gotten a letter looking for people to go out fight the Lord of Darkness. She tries to hide it from him, but Kurisu finds it in his bed and heads out. The Queen of Nana tells me to find Homer, who should know more about what to do. I bought a sword and then headed to the mainland, to Athens.

Homer’s already left Athens, but I meet a doctor who tells me to find Deadelus in Selan because his son Icarus is injured. Selan is to the east, and I gained a few levels before going there. 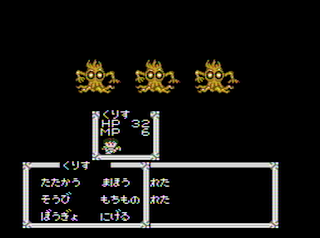 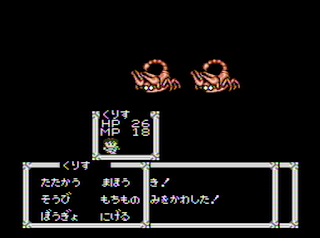 The battle system doesn’t need description; it’s Dragon Quest II. I did learn from wikipedia and reviews that there are monsters later that can break your equipment, which is pretty annoying. There’s also a day and night system like DQ3, and it seems like the random encounter rate is much higher at night. The enemies give a lot of XP though so raising levels was fast. 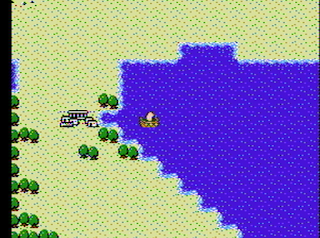 I made it to Selan and found out that Deadalus wasn’t there. Homer had gone north to Minoa, so that’s where I headed next. 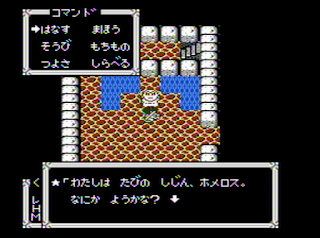 Homer was there, and told me that we need to find the Chaos Axe to break the seal leading to the Dark God. That’s a big quest with no direction, but at the same time a centaur being bullied tells me that there’s a great treasure in the cave to the east, guarded by Cerberus. Unfortunately there’s no inn in this town so that’s a hassle to walk back and forth.

This is where I stopped; it seems like this is a perfectly playable (for 1989) RPG that has an interesting theme. I believe this has a translation patch so if you like early NES era RPGs, give this a try. Next week I will cover the Glory of Heracles game for Game Boy that came out in 1992, six months after the third game. I should be done with Bahamut Lagoon by then and I can move on to Wizap and two PCE games.

1 thought on “Glory of Heracles II”