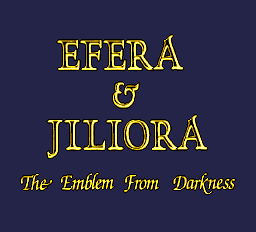 The PC Engine CD started out with two great launch (or close to launch) titles — Tengai Makyo, and Ys I&II. I guess with any system the launch titles often deliver more than the other stuff that comes afterwards, but when you play an action RPG like Efera & Jiliora it’s hard not to make comparisons to Ys, and E&J comes out on the losing end, unfortunately.

The game is based on a fantasy novel series by Hikawa Reiko, which was published in 8 volumes from 1989-1995 and has an entry as recent as 2008. There was also an anime version. The story centers around Efera and Jiliora, two mercenary adventurers. You can choose to play either of them, and there’s also a 2-player mode.

The story is the same regardless of your choice, they just control differently — Efera has magic attacks that can hit long distance whereas Jiliora focuses more on close attacks and has sword techniques. One site I found said Efera was the easier choice, so that’s what I picked.

The game begins with Efera and Jiliora captured by slavers. The cutscenes are interesting — they’re not the typical anime style you see in these games, but look more like PC adventure games. Overall the story and cutscenes are the best part. Tengai Makyo clearly put a huge amount of effort into the story sequences, as did Cosmic Fantasy, but the other games I’ve played have very few of them, and don’t really use the CD capacity much. E&J has frequent cutscenes, though — I just wish they were subtitled. My Japanese is pretty good but I have a hard time hearing what the characters are saying sometimes. 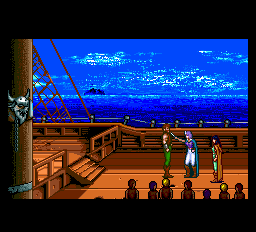 Pirates take over the ship, apparently looking for a young nobleman who was also on the ship. As E&J escape with the noblemen he dies, and E&J decide to take his pendant and a lock of his hair to his family. They usually don’t do this kind of service but maybe they’re hoping for a reward. And now the game starts.

The game is top-down action like Ys, although you do have to swing your sword (you can hold down the button to continuously attack).

There are two big problems with the gameplay, though, that really hampered my enjoyment of the game and made me not really want to play past the first chapter. The first problem is that unlike Ys, you cannot heal yourself by standing still. The only ways to heal are a very ineffective spell, items, or moving up a level. There are inns in the towns, but when you start there is no inn. Furthermore the opening map has a lot of damage plants and swamps, and since the enemies are fast and hone in on you it’s easy to get quickly overwhelmed. 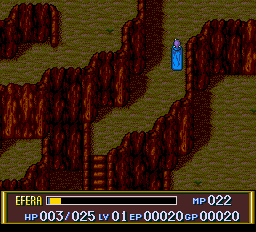 The second problem is how far you have to move on the screen to get it to scroll, which you can see on the picture above. This means that you often can’t see the monsters that are close by and suddenly get swarmed by things that were off the screen. This, combined with the lack of recovery time, and the inability to recover HP, make the game frustrating to play. The monsters also quickly respawn offscreen, which gives you many places to hold down a button and grind, but is annoying when you’re actually trying to progress. This blogger (in Japanese) who has played a lot of the PCE games and blogged about them said pretty much the same thing as me about the game. One of the commenters said that when you hit max level you’re basically screwed if you run out of healing items because you can’t level up to heal any more.

So unfortunately the main focus of the game is not very well done. 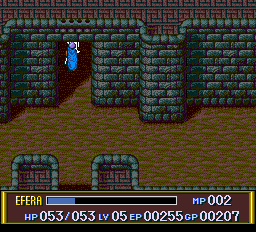 Finally I reached a town. Here is another odd game design choice — the same button that attacks also closes the dialogue window of a townsperson, and you can attack and kill the townspeople. If you do this, all the other townspeople rush you and kill you in one hit. So you need to be very careful talking to people in town that you don’t press the button too many times. There’s nothing to do in this town, so it’s on to the next one, where E&J seem to know a magician.

The magician tells us that the pendant we have is a Dream Stone, and that the family of the slain child are in a nearby temple. The temple has a bunch of monsters although it’s not clear why — I guess we’re sneaking in. This dungeon requires finding various people to lower drawbridges, and finally there’s a boss fight.

All of those crossbowmen fire at you while the boss lunges at you. I found that if you take out a few of the crossbow people on one side, you can go up and down and get the boss in an endless loop where you can hit him without any danger. After that, I was able to reach the family of the dead person, and give them the stuff.

They are of course sad to hear about their brother’s death. They ask E&J to do another escort mission for them, but E&J refuse and go off to another place, where they end up in a bar.

They have run up a big tab and the barman is not happy, but a rich person comes in and pays their bill, but asks for escort and protection in return. This starts the second section. There’s a forest you go out into but I got swarmed by insects and other monsters and after five game overs I decided that was enough for this game.

Maybe with two people it would be more fun. It’s a shame because the story and setting are pretty entertaining, and a nice change from the usual “chosen hero saves the world”.