Tengai Makyo was a pretty good launch title for the PC Engine CD attachment, showing off what the peripheral could do with a lot of voiced dialogue and animated cutscenes (though not FMV). Three years later, a sequel arrived. This is often remembered as one of the best PCE RPGs and the best game in the Tengai Makyo series.

It’s disappointing that the system is more or less the same as Tengai Makyo 1. TM1’s system wasn’t bad for 1989, but it would have been nice to see them add some new features. As for the graphics, I feel like TM1’s were actually better. The monsters, in particular, seemed more interesting in the first game, and for some reason TM2 took the backgrounds out of the battle sequences. However, I do think TM2 does more with the cutscenes than the first game did. The PCE tech didn’t quite allow for FMV (although a few later games did it), but the cutscenes use a combination of still pictures and animation to create a feeling of movement and action that few games have. According to Wikipedia this was the most expensive game to develop at the time. It used the fairly new Super CD-ROM technology, which allowed for more RAM and possibly storage space on the CD.

It makes me wonder — if you take out the speech and the orchestral music played off the CD, could this game have come out on the Super Famicom in 1992? I’m fairly certain that by the end of the SFC’s life, studios that were making games like Star Ocean and even Tengai Makyo Zero would have been able to handle this, but maybe in 1992 they hadn’t quite figured out the technology yet. Cutscenes are rare in SFC RPGs at this point — I believe in what I’ve played up to now, only Light Fantasy, Villgust, 3×3 Eyes, and Elfaria did anything approaching animated cutscenes.

Speaking of the music, the music director was Joe Hisashi, who might be familiar as the composer for many of the Miyazaki movies. Here’s the overworld BGM, which does seem Miyazaki-ish:

So the game is above TM1 as far as music (TM1 had no CD tracks), cutscenes, amount of speech, and size/length of the game. I just wish they had put more time in developing the system — I guess I shouldn’t expect too much from 1992. Anyway, let’s get into the game.

The opening scene has two beings, Mari and Yomi, create the land of Jipang on a certain planet. Fast forward many years to our main character, Manjimaru.

He’s a silent protagonist, but he seems to cause a lot of difficulty in the village and have a number of kid followers. Right now he wants to go see the festival at a nearby town. This gives the player the first view of the battle system.

I like that you can see the enemy HP, but here’s a battle scene from Tengai Makyo Ziria:

Why did they get rid of the great battle backgrounds for just colored bars? Anyway the battle system is basically the same as 1 and is just the basic AMID system. Characters do have some special techniques, and the one innovation (that was also in 1) is that you can trade magic spells freely among your party — some spells can only be used by certain characters but most of them can be used by anyone.

At the festival, Manjimaru meets a rich Tycoon and three strange doctor-like beings but then an earthquake strikes. 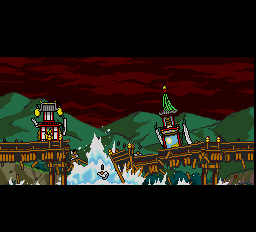 Messengers from Yomi (the land of the dead and the red sphere in the first picture) arrive, as do seven huge plants in various parts of the world. They begin to grow, blocking travel and causing other mayhem.

The demons also capture Manjimaru’s mom. He goes to save her, and meets the three doctor things again.

They seem to be enemies although they don’t directly attack Manjimaru. Instead, they leave him to the first boss, Tsuno-Oh. 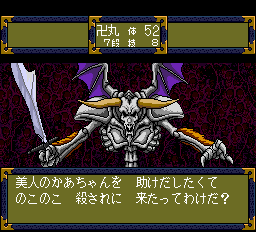 He goes down pretty quickly, and Manjimaru saves his mother. Once they’re back at home, his mother tells him that he’s actually a Fire Tribe person (as Ziria was in TM1). She also tells him of the legend that his father passed down.

1000 years ago, these 7 plants appeared during a war between the Fire Tribe and the Root Tribe. Seven heroes from the fire tribe collected seven sacred swords to defeat the plants. So obviously the main goal of this game is to find those seven swords again to defeat the plants one more time. Manjimaru puts on his father’s costume, and the main game begins.

First Manjimaru sets out for Owari Province. The entire first section is just Manjimaru, although he quickly meets the next party member (who will only join later), Kabuki Danjuro.

He’s named after Ichikawa Danjuro, a name held by a long succession of Kabuki actors (the most recent one died in 2013). Kabuki was so popular that the next game is a side story with him as the main character. You can probably tell his personality from the image above. There are a series of fetch quests leading up to the first of the seven swords, the oddest of which is to get an old man to draw you a ship:

Which Manjimaru presents to a jizo statue to turn it into a real boat.

The boats in this game are quite annoying. If you get a game over (which doesn’t force to you reload), use a warp spell, or save and quit, the boat returns to the place that you first get it. This is especially annoying in the second area. It’s hard to see why they did this. The ultimate goal of this section is the demon castle.

Here Manjimaru has to fight all three of the skeleton bosses again, although they’re the same strength as the first time they appear. The game balance is not all that great. Enemies tend to be either pushovers, or they can do huge damage. The way initiative works in this game, either you or the enemies often get two moves in a row. This makes it hard to heal in time. And once again this game makes the incredibly stupid decision to make it a game over if Manjimaru’s HP reach 0 (even if other party members are alive). This should never be in a game. I don’t care if it makes logical sense or even if it really fits well with the story or theme of the game. It also seems to be often combined with enemies that, if you get unlucky, can kill your character from full HP in one round (GDLeen, Jungle Wars 2, and this game all have enemies like this, and have instant game over from the main character hitting 0 HP).

Anyway, the final boss is a combination of all three of the skeleton bosses, created by those strange doctor beings.

This also destroys the sword, which is good because inventory space is extremely limited in this game. Now with the first Orchid gone, the pathway to Ise province opens up. Here, Kabuki finally joins the team and we have a second party member. He’s similar to Manjimaru in equipment but has a few special moves that aren’t very useful. His MP are much higher, though. In a cutscene, the three doctors report to Yomi that Manjimaru is progressing, and they decide to try to use Kikugoro against him (Kikugoro is also named for a traditional kabuki actor).

Of course Kabuki and Kikugoro don’t get along.

I’m going to stop this post here — I’m almost done with the second Orchid so I’ll make a post about that for Monday or so. I think I’m going to continue playing this game if only because it’s so well regarded by Japanese players. As I said, I think it’s unfortunate that the system is still stuck in the NES era but the graphics and cutscenes are quite impressive.