This game pushes the border of what an RPG is; it technically qualifies as an RPG under my criteria but it has fixed level ups, meaning that at any point in the game, every player will have the same stats, HP, etc. You can grind money for equipment, but the only thing you can equip is weapons. You also can only save the game at pre-determined points. All of this makes the game much closer to an adventure game than an RPG, and I’m not going to play it much. The story is often praised, and it does seem to have a bit more substance than some other games from this period.

We begin with the two main characters, Zell and Alisa. They’re voiced by the seiyuu for Shinobu and Sara from Dancouga, and I believe that other characters in the game have voices from Dancouga as well (and the personalities of the characters are similar).

While they’re riding along, they see a truck that has a kidnapped girl in it, so they go to save her. The first combat has Zell vs. a few grunts. 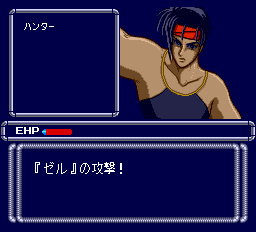 The battle system is very basic, but there is a brief animation every time you make an attack. Zell has both a knife and several guns, but here I just used the knife until he was gone. Then Alisa blows up a plane with a rocket launcher, and we save the girl

Once they reach the capital, Sefia asks to have a gun as well so she can fight, and Alisa goes off somewhere while they try to figure out who Sefia is — she won’t talk much, but people are after her life. 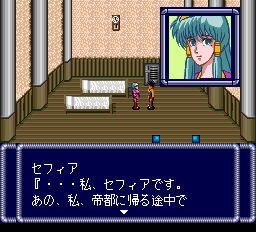 Zell escorts Sefia back to the nunnery where she teaches, and that’s pretty much where I stopped the game. The plot seems to involve some religious leaders fighting and probably wider issues than that. As I said, people commonly praise the storyline to this game, but I just don’t think it has the spirit of an RPG — if this were a Super Famicom game I guess I would keep playing it but for PCE I’ll skip it and go on to Lodoss War.