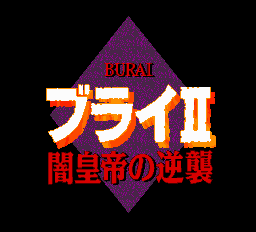 This is the second half of Burai. On the PC Burai came out in two parts, and the first part was ported to the Genesis, Super Famicom, and PC Engine. But only the PC Engine got the second part. So if you have any interest in Burai, you should definitely play either the original PC version or the PC Engine version. I covered the first part of this game in an earlier post, and at the end of the review I said this:

“The story and characters are pretty entertaining but the gameplay is not very good. There’s too much mandatory grinding, and money is too scarce and healing is too time-consuming (especially with 8 characters). I will try Burai II when it comes up though, to see if they improve on the system at all.”

The answer is no, they did not — the system is exactly the same. So I recommend reading the earlier post first. I’m not going to play a lot of this game since pretty much everything I said about the original game applies to this as well. The main differences are in the graphics, interface, and cutscenes, which are (for the most part) much improved.

After defeating Darl at the end of the first Burai, the 8 heroes go back to their separate homes. But of course evil is still plotting.

The game starts out like the first Burai, with separate short chapters for each character. The first chapter is with Sakyo and Ninetails. Sakyo is still without most of his powers due to the events of the first game.

One of the servants of the Dark Emperor, the the Water Beast General Barbara, appears, wanting to learn the strongest techniques from Sakyo. Sakyo refuses to teach her, and can’t in any case while his power is sealed. She doesn’t believe Sakyo and steals away Ninetails’ children to try to force Sakyo to obey.

Of course Sakyo and Ninetails go to find her and release her children. The graphics and interface of the game, with the exception of the tiny map sprite, is a huge improvement over the first game.

But the game still starts the same way, where you have to run around grinding until you’re strong enough to advance. There is a heal spring which is helpful if you find it.

In the first section, we find a castle that we can’t enter without a bunch of stones. This comes with a cutscene and voice — in the first game, there were only cutscenes between chapters, but this adds many more of them during the chapters as well. To find the stones you have to go to the stone heads; certain ones give you the stones. Others attack, which I found to be an instant game over — unlike the first game, you don’t get survive a lost battle as long as you’re not already weak when the battle starts.

Once we find the stones, there’s a 5 level castle that gives some new equipment and ends in a fight with Barbara.

Afterwards, Sakyo convinces her that he can’t teach her anything without his powers being restored. So she allows Ninetails to leave and try to restore the powers while Sakyo and the children stay there as hostages. This ends the first chapter.

That’s as far as I played. As I said, I didn’t really enjoy the gameplay of 1 that much so I don’t really need to play 2 that much. If you liked 1 you’ll like 2 also; if you don’t like 1 there’s no reason to play 2.