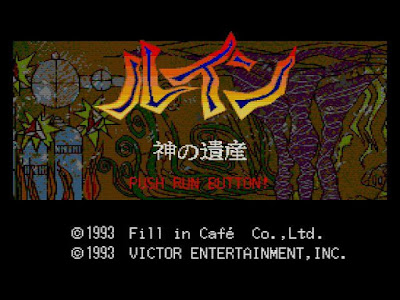 I recorded a 45 minute video since there was no gameplay video on youtube. It’s on Twitch; I had problems copying it to youtube. I also apologize for the poor voice quality — I’ve ordered a better microphone that should improve future videos.

The game opens with an old woman narrating the backstory. Since I was recording I forgot to take screenshots, but you can view them here (or in the video). The basic idea is that the age of gods ended when there was a huge war and gods destroyed the world, leaving behind only the gods of life and death, who cried. The final tear created the humans, monsters, and the god of destruction Ruin. Judging from the pictures, it looks like this is going to turn out to be a mythologized version of a nuclear war or something like that.

Our main characters are Jan and Altena. Jan is good with a sword but bad at magic, and Altena has been studying in a monastery as the daughter of the great high priest Zemo. 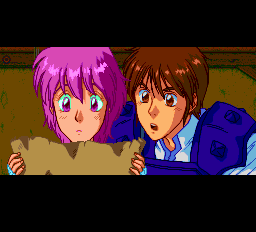 Jan and Altena find a map in the attic of their house that shows an X which Altena hopes is some treasure, and they set out to find it. 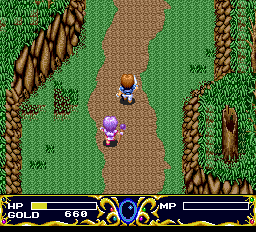 The battle system is not that great. All of the monsters in the game other than the bosses have the same attack method — touching you to do damage. As far as I have seen (I’m about 75% done) there are no enemies with projectile weapons, swords to slash, or anything like that. You can only control Jan, who basically just has the sword attack. Fortunately the PC Engine has a turbo setting on the basic controller, which helps a lot. Later Jan will get magic but it quickly runs out and is needed for boss fights. The other characters are NPCs which help out a lot (too much, but we’ll get to that later). If Jan dies it’s game over, if Altena dies she’ll pop back up once the battle ends.

Now to be fair, I don’t think anyone would credit Ys I&II with a great battle system, and so compared to the other games that are out in the era, this is OK. One big annoyance is the night and day system. As far as I can tell it has no effect on the game other than making the screen so dark you can barely see anything.

The X turns out to be not a treasure, but a marking of a “sacred area”. Apparently these “sacred areas” are left by the gods, and it’s only by the “breath of the gods” coming from these areas that humans can live. Altena gets bored and starts to head back — but then we hear that monsters have attacked. We head for the castle, where Altena’s father is. 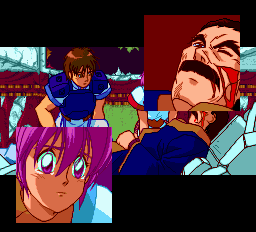 Someone should add up all the dead parents in RPGs. Anyway, Zemo (Altena’s father) is dying, and he thinks that the Time of Prophecy is here, and that the King of Beasts (Monsters) will soon be revived. We heard about Schwartz, the Hero of Prophecy, who is in the area, so maybe he’ll help. Zemo tells us to save Demisant (our hometown) and to find Princess Sharol, who has been kidnapped by the monsters.

So we head back to Demisant and find that monsters have destroyed the town, but that everyone (including Jan’s mom) has managed to escape. We also meet Schwartz, who doesn’t think he’s the Prophecy Hero (gee, I wonder who is). Apparently the Hero is supposed to be descended from a god and a human, and Schwartz’s parents were both humans. Convenient that we only know about Jan’s mom right now.

Schwartz joins us and we head off to find Jan’s mom. Schwartz is level 24 and quite strong. This brings up another problem with this game — you eventually have 4 people, and generally fight at most two monsters. The battles are often over before Jan can even reach the enemies. This would be bad enough except that Jan only gains experience for killing an enemy himself. I’ve found that this makes grinding extremely difficult to the point where I basically only gain levels from boss fights (where everyone gains XP). Monsters give so little XP and it’s so hard to kill them before the NPCs get them that grinding is basically not a solution unless you really want to waste a lot of time. I guess this can be seen as a good thing too, though.

In the next town we find that Jan’s mom has continued on, but we now have the chance to save Princess Sharol. An old man named Garickson joins instead of Schwartz, and Schwartz gives a God Stone that he has to Jan. Supposedly the six God Stones go to the Prophecy Hero, but Schwartz has a feeling that Jan will make better use of it than he will. 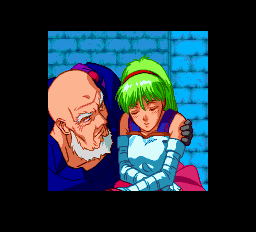 The first boss is the Evil General Loki, one of six underlings of the Beast King. All I did was run away and the NPCs killed him. I tried to participate but Jan died almost instantly. Anyway, we manage to save Sharol, who now becomes a party member (Altena starts getting jealous of her attention to Jan).

We return to Demisant which has been rebuilt, and then the next mission is to escort Sharol to the eastern continent so she can talk to the king there. After a short fetch quest to convince a captain to give us a boat, we head across the sea. 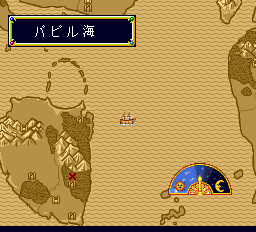 We meet the king of East Gurnica, and immediately set out to defeat the next Evil General, Gazel. The dungeons are generally fairly short. You usually have to go through a few overworld areas, then the dungeon area with a couple of chests and the boss. 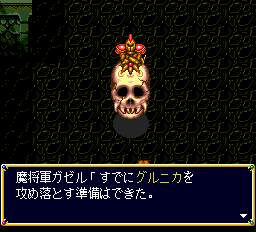 I died instantly on this boss the first few times I tried, but then did manage to move up one level by grinding and beat him on the second try just by attacking from behind while the NPCs occupied his front. After beating Gazel we receive the next god stone, which lets Jan heal or revive companions. The way the magic works is that you can press the II button to shoot out a missile, or you can hold the button down to do more advanced magic (like the healing). This healing is very important for boss fights. 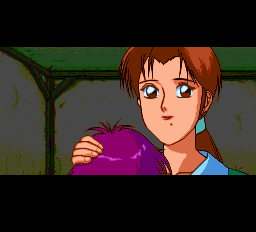 Schwartz immediately falls in love with her. Mom also tells Jan that his dad was a mysterious person and may have been a god. Apparently gods can’t use magic, so that might be why Jan can’t — but the fact that he can use it with the God Stones supports the idea. Also basic RPG logic that the main character is always the Hero.

Now we need to head to East Gurnica to find more bosses and stones, but the ship is not able to cross a place of storms — what we need is the legendary thread that can make a sail able to withstand the storm. We head to a village that supposedly preserved knowledge of this legendary thread, and end up visiting a Sacred Area. Of course, these Sacred Areas turn out to be some kind of bunker or installation left by the “gods”. 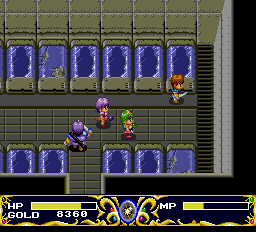 There are computers and other technology in there, but no people or gods…there is a boss waiting for us, though! 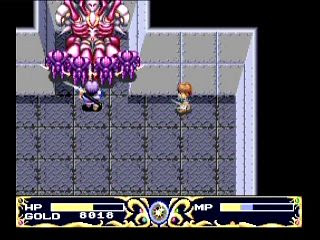 This is Bash, who shoots dudes out of four openings, who rush you and then explode into shots that do damage. I tried this a bunch of times and died within 10 seconds. I tried to level but I just couldn’t beat enemies before the NPCs got to them, or at least not fast enough to make grinding a reasonable solution.

At this point I almost gave up on the game but I found a Nicovideo playthrough of the game where the guy just stood in the corner and used the heal magic while the three NPCs beat up the boss. I tried this and it worked, but this is really not a good balance for the game. At least in games like Ys you have to learn the boss patterns to try to beat them, but I’m not sure it’s even possible with this game.

That’s where I’ll stop this post — it’s a little over halfway through the game. The next part is just beating the other Generals and getting the other stones before we get to the final story sections, but I’ll cover that next time.