On this stage we get a new member, Reiko Machida, as well as a ship that can carry another mech — I didn’t find this all that useful. On the whole, the missions are getting trickier simply because the grunts are so strong. I was able to beat this and the next scene without any deaths or game overs, but it’s a little annoying having to go through the mission at a snail’s pace, killing 1 or at most 2 grunts a turn.

Main thing on this stage is getting Kiel, one of the enemy units, who is a good pilot and comes with a good mech.

This is another slow stage with pillboxes that shoot at your guys — the dialogue indicates it will be tough but they don’t do that much damage. It was another very slow stage as I took out one at a time, but after a while the boss sends the rest of the units at you, and then I just retreated and fought them out of the pillbox range. 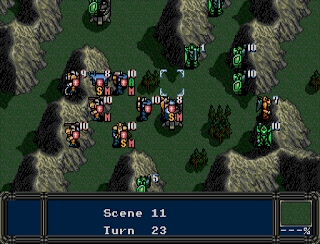 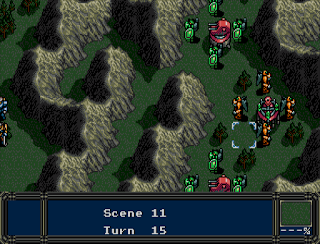 The “fairy trick” is becoming more and more useful. This is done with Harry, Nina, and Chay. Basically you have one of them out in the Fairy, use the Marb Clamp to do damage, then return to the ship, and send one of the other pilots out to repeat it. This does a lot of damage to many units, but since the Fairy is weak it takes some time.

I notice that here and there the walkthrough author recommends levelling up by intentionally equipping weak weapons. I didn’t do this, but I probably should have.

This is a difficult, long stage. 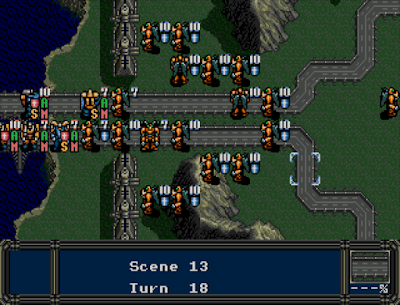 There’s a wall of shield defended units, and then two bases at the back that spit out one unit a turn. Since the grunts are so strong I failed the first time actually trying to fight them all. The better strategy is an all out attack, moving forward as quickly as possible and destroying the bases as fast as you can.

This is where my playthrough ended. I notice that the youtube guy who was uploading videos of this game didn’t finish this stage, and the walkthrough author said it was the hardest stage he had ever played in an SRPG. After an easy initial group, the boss comes in with reinforcements and gets your guys in a pincer attack. The grunts are even stronger than the ones in the past stages, and the boss is very strong and heals himself too. I failed a number of times and then tried following the exact strategy in the GameFAQs walkthrough and still couldn’t do it.

This may be because my guys were underlevelled, and I might have been able to beat it if I used codes to increase the levels or started over and levelled more. But I’m only going to do that on games that are really fun, and this one is not (to me). Also there’s a translation patch so anyone reading this can try the game for themselves. It has promise, but for me it was too slow and hard in a way that wasn’t fun.

Next up is a Macross game, from the abandoned Macross II continuity.