Aurora Quest Otaku no Seiza IN ANOTHER WORLD
Released 12/10/1993, published by Pack In Video 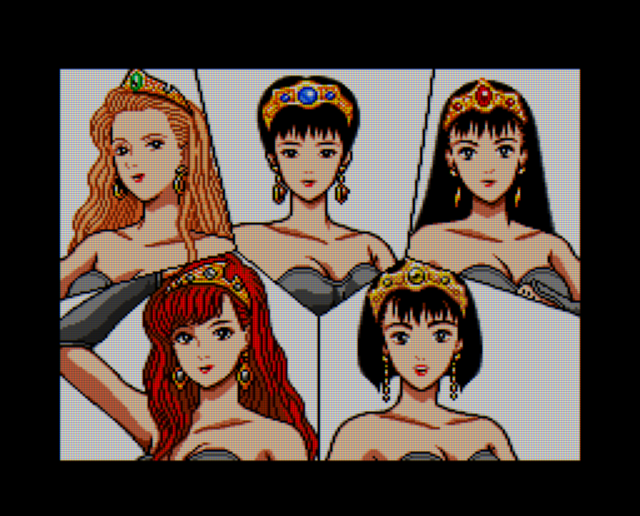 This is a complete remake of a Famicom game. It was designed by two mangaka, one of them (Motomiya Hiroshi) is well known for Salaryman Kintaro, a popular series in Japan. From what I can tell, the original Famicom game was not well received or liked, partly because it came out in the waning days of the system. But somehow there was a pachinko machine based on it, and then an idol group (pop singers) as well, thus spurring the remake.

Unfortunately the remake also seems to have been poorly received. It looks to me that by the end of 1993, even hardcore Japanese RPG players had gotten tired of basic RPGs that offered the same battle system unchanged from Dragon Quest II. 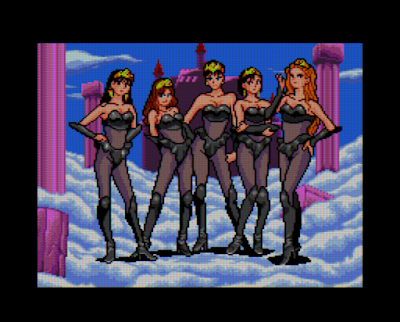 The story is a little embarrassing for 2019 — the idea is that somehow five women have come to Earth, devastated by a world war, and taken control. They live in a floating city and are representatives of the goddess Maria. The world is ruled by women, and men have become marginalized and are all called “otaku”. The main character was found unconscious near a teleportation device between the Earth and the floating city, and his goal is to make the 5 goddesses recognize his strength as a man.

You start out on the Earth, and have to beat a monster to open up the transport area that can start transporting you to the floating cities where the five women are. 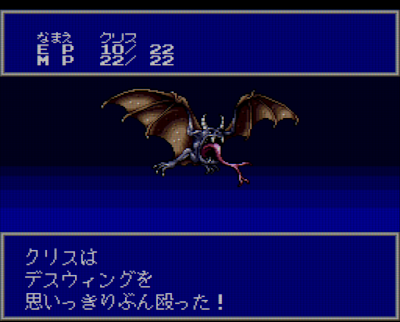 The battle system is completely standard AMID, with a high encounter rate. It even has the old “ineffective” thing from FF1 where if you attack a monster that then gets killed, your attack is wasted.

At least the monster graphics are detailed, although this aspect reminds me a lot of Maka Maka. As I said back then, I’ve never found Japanese gag manga particularly funny. Although the above bat might look good, the vast majority of enemies you fight are more along these lines: 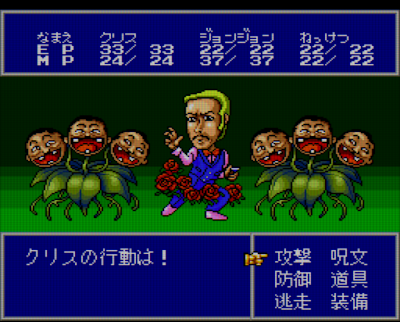 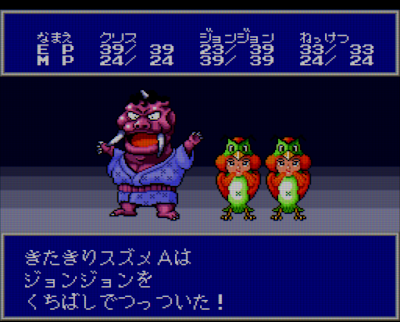 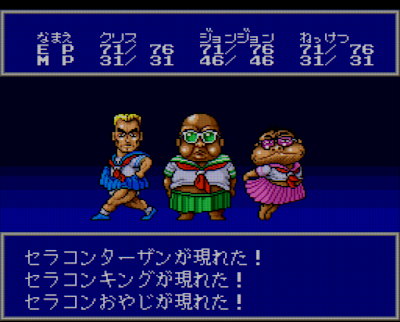 Once you reach the floating platform, there’s a small overworld where you travel to several towns. The towns all have music themes, with the mayor being a “manager” and the city halls being discos or live music houses. The goddesses are all dancing at the top of disco buildings with followers, while the men (all named “otaku”) are wandering below. 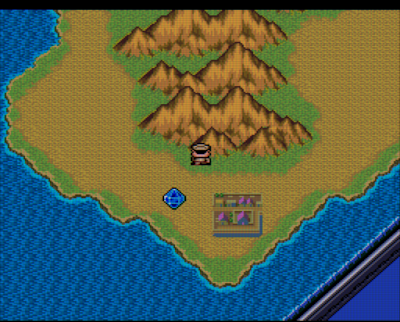 To reach the first goddess helper, Yang, you have to clear some monsters out of a flower shop and an antique store, and get three entry tickets (one from each town). With those you can enter the disco. Yang herself wants you to show her your kindness, which involves bringing her a rose from the flower store you saved earlier. After that she says she’ll recognize you if you defeat her. 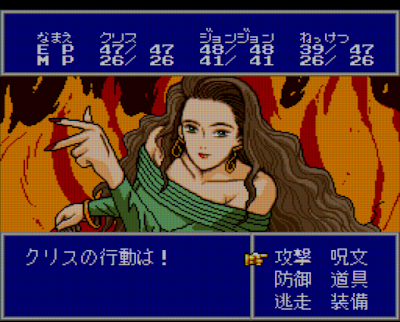 Once you defeat Yang, she regains her memory and tells you to “awaken” the other four women as well. She also gives Jonjon a plasma crystal that lets him use spells.

The second world is basically the same thing; this time I had to get three sets of armor to let me withstand the attacks of Rin’s bodyguards, then show Rin herself my “beauty” by bringing the right set of clothes. 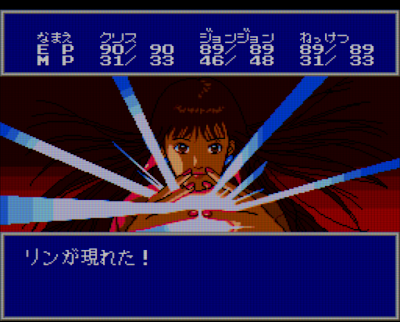 Rin also regains her memory upon being defeated, and remembers that they came to Earth to find a man who would save the world by defeating the forces of darkness (sigh). She gives another crystal, so now Nekketsu can use spells.

I think this is where I will stop — it’s clear from looking at the walkthrough that after you save the five women the story changes to a more standard “save the world” plot.

This game is probably worth a try if you don’t mind the old gameplay. At least the world concept is different, and it has a retro vibe (maybe an out-of-date vibe?) The enemy graphics are detailed and colorful, albeit offputting sometimes. There’s a lot of equipment, and it looks like the story is OK. Apparently there’s a translation patch for the original Famicom game coming out soon.

Next up will be Romancing SaGa 2 — I put it back a bit because I wanted to get the instruction manual, but I still don’t have it. I’m playing Shining Force II on my other blog, but once I finish that I’ll start RS2 whether I have the instructions or not.