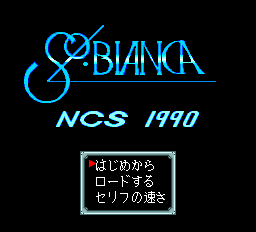 Sol Bianca is a franchise that resulted in several anime OVAs, including one revival of sorts in 1999. The only game in the franchise was released in mid-1990, for the PC Engine. Like the other games I’ve reviewed so far, it takes advantage of the CD format to include voicing and some semi-animated cutscenes, but does not use the Redbook audio to play music directly off the CD.


The premise of the game is that in a universe beset by all kinds of conflicts and trouble, your main characters are five young women who fly around in the pirate spaceship Sol Bianca looking for adventure and treasure. The game consists of seven episodes, some of which are very short, but one of the criticisms of the game is that there’s no overall story and so the game seems to just end.

The characters are all named after months: Feb, April, June, Jani, and Mayo. Giving the player five characters right off the bat is the exact opposite of Tengai Makyo and Cosmic Fantasy, which force you to muddle along with just one guy for a while.

The game starts with a cutscene, where I could barely understand what the characters were saying because the voice level was too low compared to the music — I wondered if this was just my non-native ears, but it’s a universal complaint about this game. From what I can hear, they’re going to a planet in search of a downed ship of the galactic Empire, and two of them also hope to do some monster hunting.

We touch down at the base colony. The women all start with no items or equipment, so I had to buy stuff for all 5 of them. Armor is equippable by anyone, but the weapons (and power suits) require certain skill levels. Characters have five skills: Attack, Shooting, Offensive ESP, Defensive ESP, and Power Suit. When you level up a character, they may gain some automatic points and then you get one point to spend wherever you want. Given the high requirements for some late game equipment it’s good to concentrate most of your points in one skill for each person.

This is a very grindy game. There’s no easy way to return to a city and a game over sends you back to your previous save, so you need to level up a lot just to explore, and before you can make it through a dungeon or fight a boss you have to be certain that you can do it. Most of the time I spent playing this game was grinding.

Fortunately the battle system is quick; it’s a semi-auto system where you set commands before a round and then choose “battle” and they all get carried out. The default is Fight so you can get through the battles quickly. Levelling also happens fairly quickly and you get a decent amount of money for each fight.

Eventually I had the strength to go through a cave to the northern continent, where I heard there would be a psionic beast and perhaps more information about the downed carrier. But then the next continent required a ton of levelling and that’s where I stopped. From what I’ve read the initial scenario is the most grindy and least interesting of them all, but it’s also unlikely this game will improve significantly. I think it’s better than Cosmic Fantasy but still not as good as Tengai Makyo.

There may not be an update next Saturday; it depends on how much time I have around the holidays. I probably should have spent a little more time on this game but I don’t think it’s worth devoting a whole extra week to it.