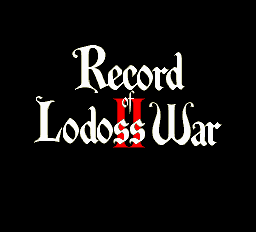 This is the second of the two Lodoss War PC Engine games; you can look back at the post I made on the first one for general information about the series. Like the first game, this is based on one of the computer games, which itself is based on the second group of Lodoss stories. The main character of these is Spark, with a new party of his own (although some of the characters from the original stories appear as well). 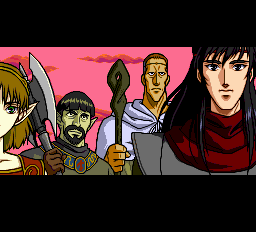 What I appreciated about the original game is that it seemed to capture the tabletop RPG origins of the franchise better than a normal RPG. There are not many random encounters, and you don’t win them just by mashing buttons. Most of the XP you get comes from finishing quests rather than killing monsters, and you don’t level up that many times during the game. It had a different feel from the typical RPGs of the time, and to me it was similar to the Sword World SFC games (especially the first one) in this respect.

Unfortunately the second game walks most of this back. Random encounters are now more along the lines of a regular RPG, most of your XP comes from them, and you’ll end up auto-battling the majority of the encounters. Level ups are also much more frequent, and you can now grind levels and money in a way you really couldn’t in the first game. 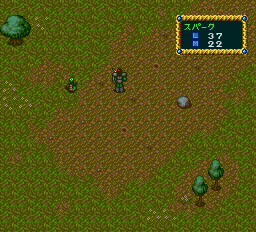 After the opening movie, the game begins with Spark, who is a knight in training. King Kashue (who I believe is from the original party) and Slayn are in the palace, and charge Spark with the mission of figuring out what’s going on with the Flame Tribe, who seem to be plotting a rebellion. Evidently Spark should be the head of the Flame Tribe but I’m not entirely sure what the backstory is there. Specifically we’re supposed to head to Hilt and Hebun towns.

Spark is on his own at first. While looking around for the towns I hit level 5 and bought most of the good equipment; there are other towns that have better equipment to the left. Hilt was easy to find; there some ruffians attacked but with all my equipment and levels it was fine. Hebun is on the right near the desert; here we’re attacked by Flame Tribe nomads (easy fight as well).

Spark heads back to Kashue to report. For now, Kashue is interested in settling new areas, particularly the dangerous Fire Dragon Hunting Zone — Spark is supposed to deliver a secret message to Raiden port town to enlist the help of the people there. Spark also gets his first companions, Garack the fighter and Ald Nova the magician. They’re a bit lower leveled and have bad equipment so I got them some better stuff and then went to Raiden. 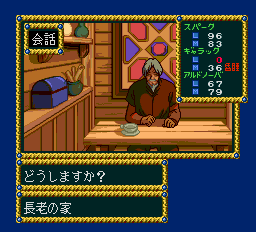 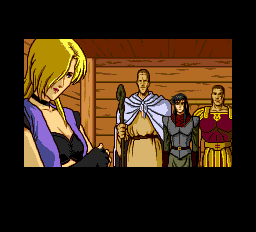 The mayor of Raiden seems to be having trouble with bad dreams; it turns out he’s being affected by a succubus. This was still the age where nipples are acceptable in games/manga.

Anyway, after the Succubus goes down, the mayor pledges to give whatever money Kashue needs, and we also get a new party member, the thief (scout) Lyna. At this point we can go to the guild and take on submissions. I did all three — recovering a child from a cult, clearing out thieves from the town, and delivering weapons to a nearby town. This gets some additional XP (the rewards from the quests themselves are quite low but you fight monsters along the way, and there are some good weapon and armor upgrades). 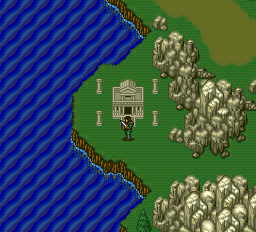 Now back to Kashue, where Dark Elves are attacking. After they’re beaten, it seems that the expansion into the Fire Valley has begun, but the new threat of the Dark Elves means it’s time for Spark to head south to Valis.

This is where I stopped. For me, this game is a downgrade from the first one — it’s by no means a bad RPG (it’s in the top class of the PCE games) but I miss the more tabletop RPG feel of the first one.

I’m playing Sakura Taisen for my other blog but I’m on the last stage so I will most likely have a Daikaiju Monogatari post up next Saturday. If you want to see what games are coming up, you should look at the completed games list, where I put in all the games I’ll be playing up to the end of 1994.