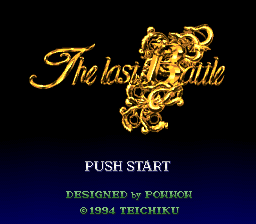 Commenter Carlos warned me about this game a little while back, and he was right. This is by now a familiar story — a game with some good ideas, which are torpedoed by bad design. The three most common bad design features are all present here: cumbersome interface, ridiculous random encounter rate, and bad game balance. Sometimes the game remains playable and average, but in this case I think The Last Battle is one of the worst games I’ve played so far.

Many Japanese sites seem to regard this as a スルメゲー, literally “squid game”, named because squid gets better the more you chew it (supposedly). These kind of games are garbage at first, but once you get used to the system and figure things out, it gets more interesting. I personally never found that to be the case, but usually the Japanese players agree with my labels of kusoge. In this case it seems like there are some people who like the game, so maybe you should give it a try?

Anyway, on to the game. It was developed by three studios working together, and some of the designers worked on games like Metal Max, Jungle Wars, and Shin Momotaro Densetsu, so you wouldn’t expect it to be bad. But the development was delayed several times, and maybe all the different cooks never worked well together. It was released by Teichiku, which is a music/record company and only ventured into video games a couple of times. 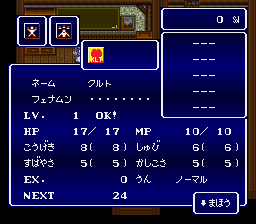 The game begins by asking your name, and then introducing the main character Kult. One bizarre decision in this game is that his name is クルト (Kult) and the evil empire is グルド (Guld) — I thought maybe they were going for something there, but as far as I can tell there’s no reason for them to have such similar names.

So why did we put in our name? It turns out that at 16 years old, people undergo a coming of age test, and then receive their true name in secret. They need that true name in order to use magic. So the beginning of the game has Kult doing this test, which involves recovering an item from a nearby cave. First Kult can buy and equip some things. The walking speed is very slow, and the interface for everything is quite cumbersome. To equip something you have to do A->item->equip->Kult->dagger->Kult, and the opening of each menu is fairly slow. This is a huge problem with the game and really unacceptable for late 1994. 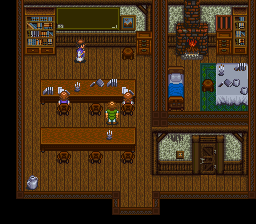 On the way to the cave, you’ll meet the first encounters, and find that this is another auto-battle game. At least in this one you can issue commands (through a typically slow interface) and there are some AI settings. But I continue to not particularly like the way these systems work. You can never get the people to do what you want to do, and they move into danger and do stupid things (trying to command them all in every battle would be a nightmare).

You will also discover that the random encounter rate is ridiculous. Even among the SFC games I’ve played, which generally have high encounter rates, this one stands out. 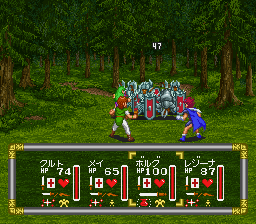 I also died in my third battle in the cave, so I also discovered very early on that the game balance is not good. This game required more grinding than any other game I’ve played up to now, and that’s with the fact that you already fight a ton of battles just going through the dungeons. I think emulator speedup is a must for this game. You can hold down the Y button to make the battles go a bit faster as well.

I leveled up a bit and then went into the cave. With a few levels and Kult’s cure spell, the dungeon isn’t so bad. One odd thing about this game is that enemies don’t drop money. Instead, you get “jewel bags” every so often from the enemies that you can sell. This is annoying because the inventory space is limited — not as severely as some games, but there’s no item stacking and you need a free inventory space to be able to equip things, so it can get frustrating.

When you get back to the village, Guld has attacked. This is the first appearance of a common gameplay element — you have to avoid (or fight if you want) the soldiers on the map and make your way to a boss. Once you beat the boss, the you win against Guld and the area is freed. 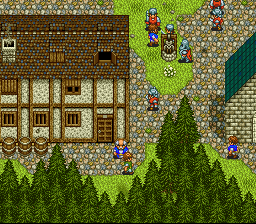 After this, the mayor sends Kult up to Silveil Castle to deliver a letter saying they were attacked. There, Kult meets captain Yuri as well as the elf Mei. Mei joins the party and there’s another war event as Guld attacks the castle; some birdmen have managed to breach the walls. The dialogue indicates that you will fight the birdmen while the other soldiers will take care of the other enemies, but in fact the bird enemies are endless and you have to make your way to the boss like normal (who is not a birdman). After that, we have to escape the castle and leave Yuri to an uncertain fate.

Mei is an annoying companion because it’s so hard to keep her away from the enemies. Even if she casts a spell against the enemies she runs into the middle of them. So she dies a lot. 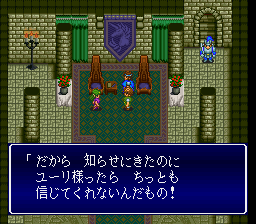 From here we head to Febenels’ house, a mage who helped out at the beginning. He decides that we should become full fledged magic users, which requires undergoing a trial in a nearby tower. It has a bunch of puzzles to complete; this is the only dungeon in the game that has any construction other than rooms and chests. 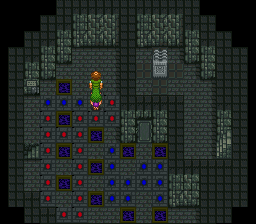 Once this is complete, we get access to the magic crafting system. This is one of the original aspects of the game. There are 4 different types of mana (earth, fire, water, air) and by combining them you get new spells. For instance, Water + Earth gives you a lightning spell. By varying the amount of each type of mana you put in (1-100), you change the area of effect, damage, and MP cost of the spell. There are also three special items in the game that allow you to make special spells like Escape and Teleport.

Although this system is interesting, the main problem with it is how long it takes to build up the mana needed to create good spells. You only ever get a tiny amount from a battle (1-2 of a couple of types) and so building up a good stock of spells is a hassle.

After the tower we get our other two companions — Bolg, a “yak” (sort of a bipedal dog race), and Regina, who is actually the daughter of the king of Guld, but she thinks her father has been tricked or controlled. These are the four companions for the rest of the game.

I made a paralyze spell, which is one of the most useful spells in the game because of how long it lasts. Other useful spells are heal (which you can remake periodically stronger — if you do 100 water mana as the second ingredient it will heal all), Protection, lightning, and earthquake. 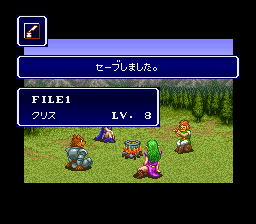 The rest of the game is basically just taking over a series of castles and towns from the Guld empire. Next up is Belkstat, but we need the Yak’s help to do a battering ram to knock down the gate. So there’s one war event at the Yak town and then another at Belkstat. The Belkstat one is quite challenging; I followed a Japanese walkthrough’s advice and got Bolg a max effect Earthquake, which immediately kills the grunts in the boss battle. You still need to do some level grinding even after that, but I beat it eventually.

In Hanstad we get knocked out and taken to a prison island, and find out that Yuri is still alive. So we manage to rescue him and a number of other prisoners, and then escape, but there is a war event on the ship as you leave. 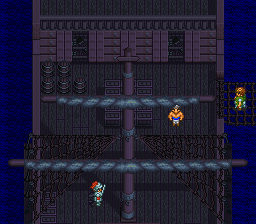 Back in Hanstad we get a ship. Now you can go around the world and there are actually a lot of side things you can do; by using the paralyze spell you can defeat enemies that are somewhat above your level and get a lot of powerful equipment. Some of the possible things you can get are the strongest armor in the game, and Mei’s best weapon. Now we can retake Silvel castle, and then head to Wood in the desert to continue the fight against Guld.

From Wood we continue to Belgderen, which is the hardest and most annoying place in the game. There’s another huge leap in enemy strength, you have random encounters in a long confusing dungeon, and a tough boss. This was the point where, more than anywhere in my whole blog, I regretted my rule that I have to finish games that don’t have patches. And so I broke down and used cheat codes — an unlimited money code, unlimited mana, and no encounters. Even with all of that, and the 10 or so levels I had gained before using the codes, it was still challenging. 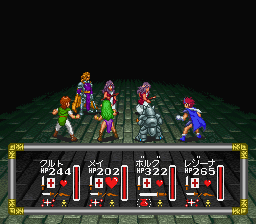 Next up is Guld castle itself, but we can’t get in without the Dragon’s Tear. This comes from going to a dragon cave with two specific items. Kult also learns that he’s actually a prince who was abandoned at birth because of a prophecy that he would destroy the kingdom.

After defeating King Guld’s strongest warriors, we learn that he’s actually being controlled by Ice Queen Iskar, who pulls us into an underground world for the final war event. 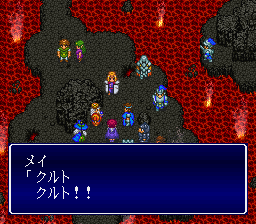 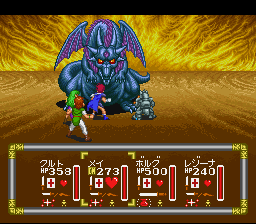 And the world is saved. 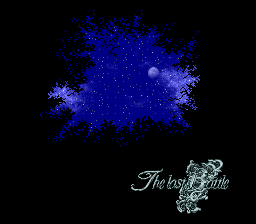 Phew. As I said at the beginning, this game does have some decent ideas. The auto-battle system is actually not as bad as some of the other games — I felt like I had more control over it. But any good ideas they had are completely ruined by the slow pace, the ridiculous random encounter rate, and the game balance. If you want to play this game legitimately you will need to do a lot of grinding. More grinding than in any other game I’ve played up to this point. That’s just not my cup of tea.

As a side note, Blogger has been getting worse and worse since I stared blogging here with successive updates. I’m no longer able to deal with the sidebar information except as a mess of unformatted HTML code, so I’m removing the “recent and upcoming” section (which isn’t visible on mobile anyway). If anyone really misses that I can try to find a way to add it back. If my blog weren’t already established here I don’t think I would start a new blog with Blogger.