This is the final game of 1994! It’s a pretty standard RPG with some meta-elements — the back story is that 1000 years ago a demon attacked the world, and after it was defeated, the king created schools to train people who would become “travelers”, which are basically adventuring parties. The main heroes are one of these traveler parties, with the usual fighter, mage, priest, etc. They take missions from the Guild and go around solving problems.

However, there are several reasons why I didn’t play it much. The first is that the voice audio is mixed so low compared to the music that I can barely understand what they’re saying. I’ve encountered this problem before on other PC Engine games. Every time it happens I wonder if it’s an emulation issue or just my non-native Japanese abilities. But I found some Japanese players playing on original hardware who have the same issue; one blogger said “I can’t understand the story at all.”

In the first area (the school) I got a mission to go somewhere, but I have no idea why I’m going there or what I’m doing because I can’t understand the dialogue.

Second, I really do not like the art. All the characters have this creepy, dead-eyed look. 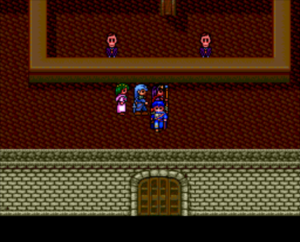 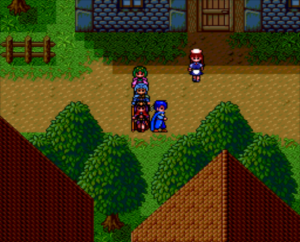 Third, it has all the usual problems of a game this game this age (and worse). The interface is terrible — you can’t tell who can equip things or what the power of items are in the shops. Everything takes more button presses than it should and moves slowly.

The battle sequences divide into front and back: 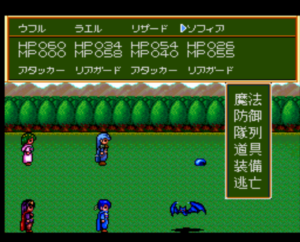 Only the front characters can attack with melee weapons; back characters have to use magic or spells.

From what I have read, the game is very easy once you move up a couple of levels at the beginning. You level very quickly, the magic is overpowered, and the game itself is quite short. One blogger said it was worth buying it at 10% of the original price.

So that’s about all I will say about Travelers. That ends 1994; next week I will have a preview of the first part of 1994, and then Lufia II, a game I am very much looking forward to. Langrisser III is taking a long time, though, so I’m glad for that buffer week.