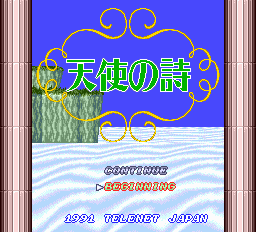 Hey look, I actually completed a PCE game. It’s not especially good but it’s short, and since the second game continues off the first I thought it was worth finishing. It’s what you would expect from a game of this era — standard, DQ-style RPG with little to distinguish it from other games. The title means “Song of the Angel.”

It also follows the pattern of a lot of the CD RPGs I’ve been playing in that it has some cinematic scenes and voiced dialog, but not much. Tengai Makyo and Cosmic Fantasy seem to have put a lot of effort in that area whereas the games since then have not. The music of this game is fairly good, although there’s still the common problem that the music not being played off the CD (e.g. the battle theme) is significantly lower quality than the CD music, and has a harsh sound in comparison. It also seems like the volume isn’t consistent and the harsh battle music is much louder than the map music being played off the CD.

The most distinctive feature of the game is that it takes place in something similar to the real world. You begin on “Erin” (i.e. Ireland) and then go to Brittania. Many of the locations are at least based on real world locations (like Portsmouth or Glastonbury Hill), but I was not able to tell whether the map actually looks like Great Britain. This also comes with an intriguing setup where Christianity has gotten a strong foothold in the region but the druids and ancient gods are still around. Unfortunately this aspect isn’t developed very well and it was never clear to me how the “angels” of the title and the heavenly beings related to either of these real world religions.

The main character is Kearu (Cure in Final Fantasy), who wants to go to the castle with his fiance Claire to have their wedding blessed. Along the way she gets captured by a demon, who Kearu learns is working for Lucifer. So the first task is to save her. Along the way we pick up some of the other members of the party. Buzen is an older magician, Enya a young celtic woman, and Jito, a swordsman. The party is unbalanced because Jito is only there for part of the time, so for much of the game your party is a fighter and three magic people. Like most games of this era you have to save a good amount of your MP for boss fights.

The first task is to make it off of Ireland, which requires calming the sea by beating some bosses. Then you get a ship. At least this game has a run button, which even works on the ship.

Eventually we make it into the tower where Kaim (the demon that stole Claire) is. Even though the first fight against Kaim is an automatic story event loss, when you actually fight him for real he’s easy. It helps that Jito gets his strongest weapon very early in the game, for some reason. After saving Claire, we learn that Claire is the descendant of the heavenly beings, which is why Lucifer wants her. Meanwhile Jito found his wife as well, so he leaves for a bit.

Now the game turns into the normal idea of defeating Lucifer, but that requires travelling around to find various angel artifacts. First we need two mirrors. We can find the Lu Mirror at Stonehenge.

The other mirror is held at Exeter Castle by Queen Hermes, but she refuses to part with it unless we defeat Pluto in the nearby Glastonbury Hill. Jito rejoins here, which is welcome since he adds much needed power. Unfortunately, meanwhile Lucifer has burned down Enya’s town, killing her grandfather.

The next step is to pick up a thieves’ key from a thief town so that we can open various doors that will block the way, and then another ship, to go north to the snow-covered area (Scotland?). One thing that occurs several times in this game is having to talk to various people in a town to solve a mystery — whether it’s your money being stolen, or an important item being stolen or broken. This is a welcome relief from the usual fetch quests.

The major quest remaining is to activate four cross statues around the world to gain access to the heavenly kingdom. First we need a Milky Way Drop to convert our ship into an airship, which requires seeking out and defeating Asmodeus. Unfortunately Asmodeus kills Jito (which I don’t have a screenshot of), taking away an important source of damage for us. Nooo!

Next we need the Angel’s Whisper to activate the Cross shrines. This just requires solving a small puzzle at Chepiot castle, and the four Crosses are in various towns around the world. So for a while there’s no dungeons or anything like that. After activating the Crosses, it’s up to the heavenly land. As I said before, it was never clear to me how this is supposed to relate to Celtic or Christianity but maybe I wasn’t paying close enough attention to what the townspeople said. Up there Kurea receives the strongest equipment, and we meet Claire’s mother Maria. She gives us the Angel’s Tear.

Heading back to the surface we find a spring that has the voice of Claire’s father, who gives our ship the ability to cross mountains, opening the way to the final dungeon. This also heals HP and MP so it’s a good place to level, but the monsters give too little money to get everyone the strongest equipment.

The final dungeon has all the previous bosses, but they’re all the same strength they were when I fought them the first time. So they’re pushovers.

Lucifer himself is not that hard — you can seal his magic with Buzen’s spells, which helps a lot, and from there it’s just a matter of buffing and healing. He’s got a lot of HP but his attacks aren’t that bad.

In the conclusion, Claire sacrifices herself to seal Lucifer away, and Kurea walks away in sorrow…the end.

For 1991 this certainly is not a bad game but it seems like it has more potential than actual quality. I’ll be interested to see if they improve on the system in Tenshi no Uta II, and then in the eventual Super Famicom third game.

Next up is Breath of Fire, a game I imagine some readers have played.