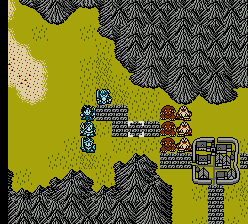 This is a short, easy stage. All you have to do is get Kurisu to the town. Two more monsters come out of the town each turn, but if you combine Duval and Rolan’s magic with Hans’ bow attack it’s not hard to open up a passage. 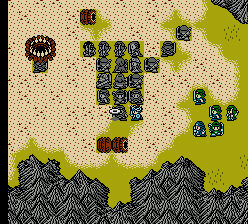 This is basically a boss fight, with the Sandworm mouth. Mini sand worms come out, and you have to destroy all 3 parts to kill it. The boss can use an earthquake attack. Even so his HP are pretty low and I think once you beat it the mini worms stop coming out — if not, I think you can finish the battle by killing the boss and having Kurisu get to the mouth and go in.

The gimmick to this stage is the stone barriers, which you can remove by attacking 4 times (I think). It has to be a melee weapon attack directly adjacent to the barrier, and the area weapons like the Whirlwind Sword won’t work. 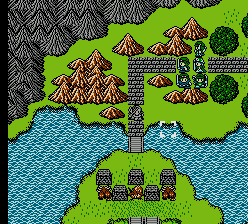 The main threat in the stage are the Hell Hounds, which can use Barlizer (the wide area flame spell) for free. However, the rest of the enemies on the stage are not much of a threat, and I now have enough high damage spells that I was able to target them first and take them down. Also, they can be put to sleep, a basic spell that a lot of characters have. Attacking a sleeping enemy does not wake them up. So with all that in my bag of tricks I only lost 2 characters. Once again I’m not sure how the enemy lairs work. Every time I think I understand them, something happens that goes against that understanding. I know the distance between your characters and the lair is a factor, but I think there may be a limit to how many characters can be on a screen at once — that would explain why sometimes lairs don’t spit out monsters even though you’re right next to them. But even that doesn’t seem like a complete explanation. 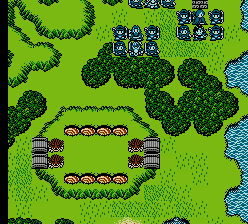 One set is guarded by those 4 things in the above picture, which have high defense. The other is not. The enemies they spit out aren’t anything especially dangerous, so advancing and using multi-target spells helps a lot. I am now certain that one of the conditions for a monster lair to produce monsters is that there can’t be too many characters on the screen. In the following picture, despite the 6 active lairs, only one enemy appeared. Before I got down there they were spitting out as many as 5 monsters in one turn. 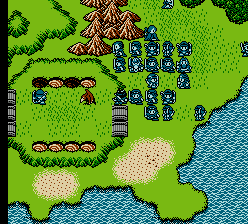 This is another cave, meaning you only use the 4 leaders. The cave has five rooms; the first four have some good equipment, the last has the boss. They also have traps that shoot out missiles and such. 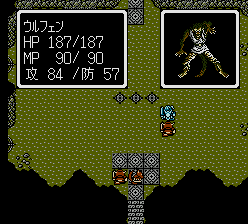 The boss is pretty strong; I lost two guys. The Bunshin spell helped a lot — it creates 4 copies of the character and they go out and attack. Duval got the Flame Sword which casts Barlizer, so having 4 of those going off in one turn helped a lot. Rolan has the same spell.

One of the items you find in the cave is the Luna Bow, Hans’ ultimate weapon. Which of course means he immediately leaves the party. 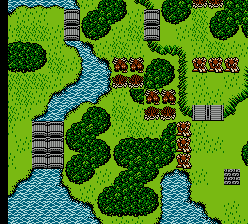 This stage has a lot of nasty enemies, but I now have casters with spells that hit every enemy on the screen. With that, plus Duval’s quadruple Barlizer spells, and the rest of the forces, it’s not that hard to take down even this many enemies. Only 4 monster lairs.

After visiting the town you have to do the same thing again, this time to put a log in the dam to open up the next area. It’s no harder than the first time. 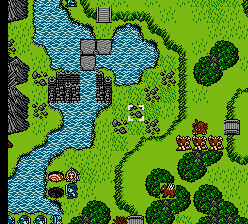 4 Barlizer spells in a turn is really powerful.

This stage has tough monsters, like the new Manticore enemy that can use Barlizer for free, and other nasty enemies. On the other hand, the “hit all enemy” spells and quadruple Barlizer and other such spells are so powerful that ultimately the stage isn’t that hard. I lost a few guys, but at this point in the game revival is so cheap that it really doesn’t matter that much. 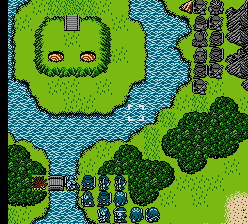 I split my army into two to deal with all the monster lairs.

Next post will be the last one for this game.