OK, I finally finished the game. This took longer than I had hoped.

Chapter 4 takes us back to 15 years prior, as we attempt to stop Shiral from using the power of Ra to become Elzard. The map is the same as last time. 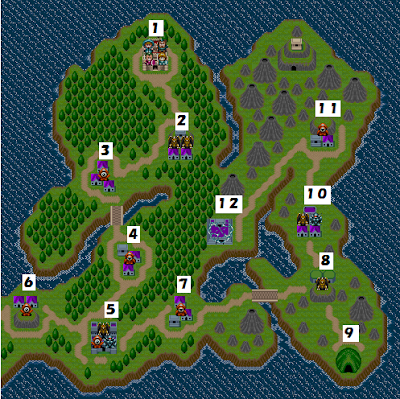 Throughout this chapter the party meets younger versions of people from the last chapter, or childhood versions of themselves. In place 2 we meet Pyne’s father the king, who is wounded and in prison. Pyne gives him an herb to heal before the duel he has to fight, but the king gives it to a sick boy instead and dies in the fight. 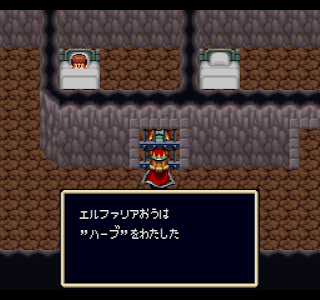 In town 4, Zora (who has also been sent back) sees himself trying to take the staff of Ra to Shiral, and thinks about how pathetic he was. This section had a hard boss — if the boss is tough there’s not much you can do if you’ve already melded good stuff. Luck can help a bit, but that means going through the whole dungeon again.

At 5 and 6 you meet past versions of Sheena and Karamon and learn a bit more about their backstory (the heroes Sheena’s parents helped, causing their deaths, were of course our party.) 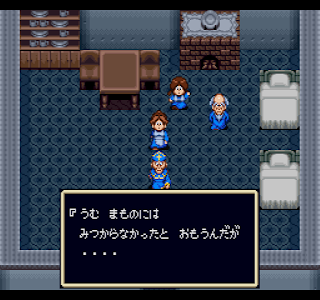 Zora goes to the Griff village at 8 and steals Papi (who is Sheena’s friend) to sacrifice in order to call forth the Ra power. Town 10 has an annoying boss — bosses that cause status effects like paralyze or freeze are annoying because if the effect hits your healer, you often lose because the healer can’t heal your front line fighters. I think higher defense helps with this but it was hard to tell. 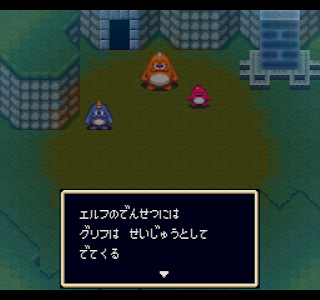 Finally at 12, it turns out the Staff of Ra Zora has taken to Shiral is a fake. The future Zora switched it out for a fake one. After the party takes care of Shiral and heads back to the future, future Zora somehow combines with past Zora and then takes the Ra power for himself. Ell had thought that somehow Zora’s love for Rishia would make him protect the heroes and be good, but that was a grave miscalculation. By the time the heroes return back in the present, Zora controls the world.

Chapter 5 puts us once again in Elfaria, this time in the Zora-controlled present. 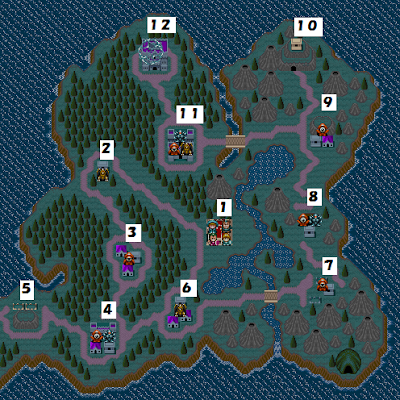 We need to somehow defeat Zora, which first involves recovering the Elzard Book and also getting the Zora Seal to stop the monsters in the area.

In area 4, Dalkam appears — in this timeline Zora has turned him into a monster. Dalkam wants to help the heroes somehow although they don’t trust him. In location 5 he sacrifices himself to restore the Ra spring and help us find the Elzard book. 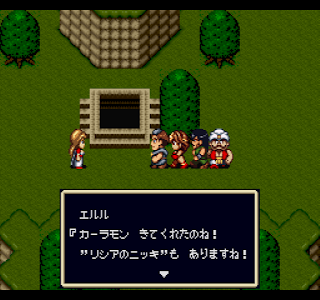 In area 6 we learn that Zora has killed the alternate timeline heroes except for Papi, who he’s going to sacrifice to become Elzard himself. He has captured Ell. This finally happens in area 8 — Zora sacrifices Papi. Ell tries to remind Zora of his love for Rishia, but he just kills her instead. This does upset him enough that he retreats to Elfas, the final area. 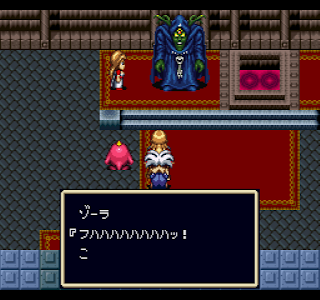 In area 10, Pyne meets the Elf Elder. He was the one who sent Ell to help the heroes, and apologizes for the mistake with Zora (big mistake!!) If we can meld the items described in the Elzard book, we can defeat Zora for good. 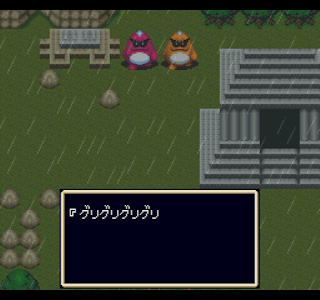 The final area doesn’t really have any new story — you meld the items and then make your way to the boss, who is pretty easy as long as you have both effects. Since different effects cancel each other out I found the best way to do it was the Fire Orb on one guy, the Spirit and Thunder orbs on another, and then all the other spaces taken up with Sword or Mail. 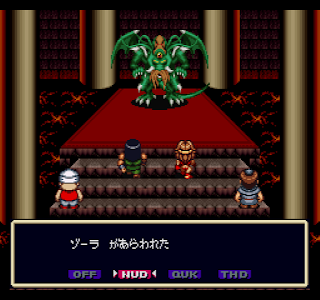 After Zora is defeated he turns back into his human self and makes one more statue of Rishia before dying, saying he’ll go to hell where he won’t see her. If this was supposed to be redemption it’s not really very good. 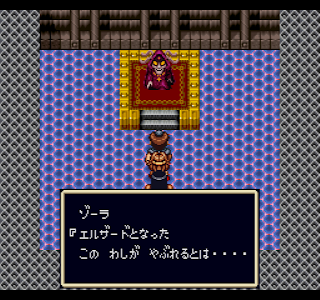 Pyne is now king, but decides he wants to be a scholar instead and goes back to study at his first village. There are very brief scenes showing what everyone else does, and that’s the end of the game. 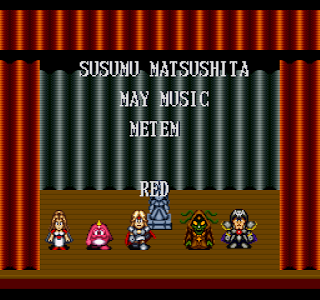 I don’t have much to say about the gameplay because it’s repetitive past a certain point — the lack of options in battle means you’re just melding items and then watching them fight. I’ll say more about this in the review post, but ultimately this feels a lot like Romancing Saga to me. I commend them for trying something different from the usual RPG system, but ultimately I just don’t think it works. At least I was able to complete this game, but I couldn’t play it for very long in one sitting before getting bored.