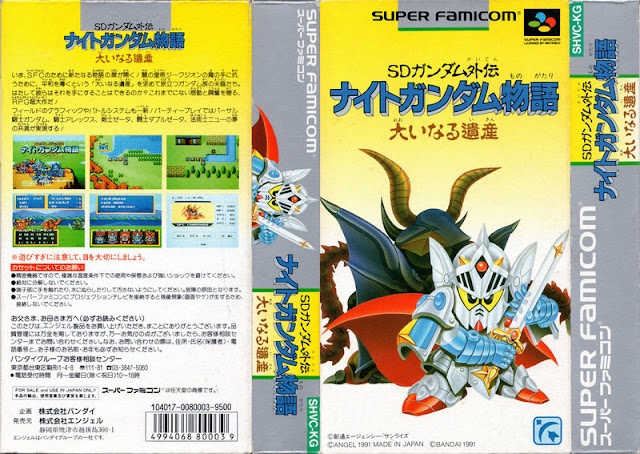 I will start this post with a summary: this is a crappy Dragon Quest clone with barely updated Famicom graphics and interface. Fortunately I can skip it on a technicality, so this will be the only post for this game.

The basis for this game is rather complicated, so bear with me. You may be familiar with Gundam, the long-running robot anime that started in 1979. The sprawling franchise involves numerous anime, manga, novels, games, movies, and such. The franchise has spawned sub-franchises, and in this case even a sub-sub-franchise.

In the mid-80s, they started to release various toys under the name “SD Gundam,” which referred to a “super-deformed” and anthropomorphic style, which you can see in the box cover above. From there, a line of SD Gundam Knight Gundam mechs and characters were released in the Carddass system, a vending machine that dispenses collectible cards. These were intentionally based on Dragon Quest and featured various Gundams and characters redone as fantasy-world heroes. This was followed by manga and games featuring these characters. Three SD Gundam Knight Gundam games came out for the Famicom.

The game under discussion here is essentially a Super Famicom compilation-remake of the Famicom games. It’s not a straight port because it makes changes and adds additional content from the OVAs and such, but at its core, it’s a remake.

The game has (to me) a strange feeling because it’s so derivative of Dragon Quest in almost every aspect of the game. Even the music reminds me of Dragon Quest. But this is partly because the original materials were intentionally based on Dragon Quest.

But this also embodies the worst aspects of the tedium of many Famicom-era RPGs. Your characters can only hold 8 items each (including their equipment), and there is no bag to hold extras. Items don’t stack, so each herb or antidote takes one slot. You meet enemies that poison you right off the bat, and it’s hard to make it back to town with your low HP if you get poisoned. Tank learns cure poison at level 4, but until then it’s rough. You can’t see the stats of equipment without buying them. Despite the 8 buttons on the controller there’s no search/talk default button, so you have to do that from the menu every time.

Another Famicom-like feature is the brutal difficulty. You basically have no choice but to grind levels near the first town. If you venture too far north or south, or try the cave to the northwest, the first encounter you meet will slaughter you. At the beginning even many of the fights around the town are hard, because of the poisoning enemies and the slimes that split into multiple slimes.

The opening scene has a story introduction in English. You see this in old Famicom games sometimes (Zelda is a good example), partly because displaying Japanese characters was still in a primitive state. As you can see, Satan Gundam wants not only to kill all humans, but to deport them as well.

The game is divided into 4 chapters, each one roughly corresponding to one of the OVAs or Famicom games. The game begins with King Revil and his daughter Frau (both characters from the original Gundam) watching a meteor land, which turns out to be the Gundam, who has lost his memory. Revil makes him a knight and sends him out to defeat Satan Gundam.
You also get Tank (based on the Guntank) who is a magician. Since the game gives you no direction, you wander out of the castle and begin fighting enemies. 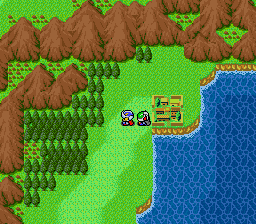 The battle system is essentially Dragon Quest, with Dragon Quest-like enemies and spells, just renamed. The one unique system is the Carddass system, where you can go to vending machines in item stores and get cards, which then can be used in battle. But you have to get through some of the game before you can actually call out the cards, so I wasn’t able to see this. For some reason they removed some cards that were in the Famicom game but left space in the collection album, so you can’t collect 100% of cards.

The caves work like they did in Dragon Quest I, with darkness obscuring much of your view unless you have a torch or light spell. I was not able to venture very far into the cave without getting slaughtered.

So as I said at the beginning, this is a remake and thus I am going to use that excuse to skip it — I’m not planning on skipping all remakes/ports but this one is really bad. There is an SD Gundam Gaiden 2 in 1992 which looks somewhat better, so hopefully I can stick that one out.

The next game after this is Super Chinese World, which was released in the US as Super Ninja Boy, so that will be a skip as well. Zenic Reverie has a post about it. After that is a Dragon Ball Z RPG, so that’s what I’ll be playing next.