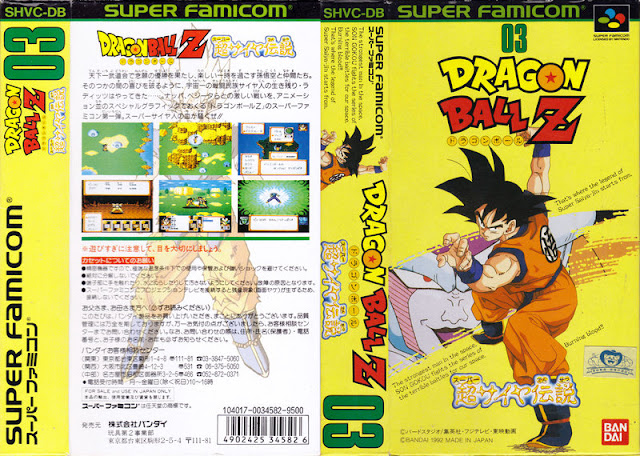 I’m at a disadvantage here; unlike a lot of people of my generation, I have never seen Dragon Ball Z. It started on US TV when I was 16, and by then I had the idea that it was a mindless kiddy show with nothing but fighting and so didn’t watch it. This game was clearly aimed at people who were fans of the show, and parts of it are hard to understand without some knowledge of the series. At some points you’re meant to re-enact stuff that happened in the show, but the game’s hints are a bit too vague to deal with this if you haven’t.
The game begins with a recap of the Dragon Ball storyline prior to Z, and then you control Goku. There’s not much direction for what you’re supposed to do, so you start flying around looking for houses, and talking to people. Meanwhile, enemies pop up:

The way random encounters work is interesting. The higher level you are, the more likely the enemies are to run away from you. If your level is high enough for a particular area, there are no more random encounters. This prevents grinding, but I rarely grind anyway so I like this feature a lot.

The battles try to graphically recreate the feel of the series, by having every attack animated:

I would find this much more annoying if I didn’t have the emulator speedup key, since the animations can be rather long. The battle system is rather creative; I understand it’s borrowed from the Famicom games:

You are presented with 5 cards (I already used one in this image). The dots on the top of the card are the attack, and the kanji number on the bottom of the card is the defense. The kanji in the middle is the type — if it matches the type of the character, they attack all the enemies and have a boost for that turn. If you use a card with the 必 kanji (on the right of the above image), you can use one of your Ki powers. The dots on the top of the card also determine the order of fighting. Sometimes when you attack you take damage from the enemy instead, but I’m not clear on why this happens.

In addition to those, there are “help cards” which are basically items. They can deal you a new hand of battle cards, heal HP or Ki, and there are some special ones that either have huge effects or are story related.
The houses on the map are card shops, healing, random people, and a training house where you can get gold or increase your Ki points. One problem with the game is that the map has no recognizable features like towns, countries, etc. I assume this is a feature of the original anime as well, but it makes it hard to find your way around or know where you’re supposed to be going. But the explorable area is fairly small so I eventually found a cave where I’m supposed to face the first enemy Saiyan, Radditz. You fight a fake version of him and then the real one.

One complaint I have about the boss battles is that you mostly do little to no damage to the boss, and have to use 必 cards (which come up by luck), or some story gimmick. In this case it’s a story gimmick — you use several cards which I understand mimic what happened in the anime, but having never seen it I had to use a walkthrough to figure out what to do. Since the game has no equipment and raising your level has a limit, you have to know about these to win.

Goku dies after the fight, and then you actually play as him in heaven, doing an incomprehensible gravity minigame.

Afterwards you’re back to Earth, this time as Gohan, After picking up a bunch of companions, it’s time to fight the next boss, Nappa.

Nappa is not too bad as long as you can get some good 必 cards to come up. The problem comes next, when Goku has to fight Vegeta alone, and then Gohan and pals come to save him. I cannot beat this fight — I’ve gotten about 9 game overs without even reducing him to half HP.  None of the walkthroughs I’ve consulted offer any advice, and the youtube video I saw somehow had a Goku that’s about 4 times as powerful as the one I have. So I’m not sure what to do. Has anyone played this game? I wonder if I’m missing something about the system, because I’ve seen some people on Gamefaqs wondering how they can stop from killing Vegeta too quickly for him to use his transformation effect. Whereas when I just tried it another time, Goku died on the first round (game over). 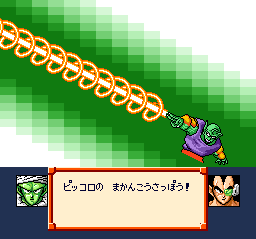 I imagine this game is a lot more enjoyable for fans of the anime. I have all these characters on my team but I don’t know who they are beyond their names.

(EDIT: I am not going to return to this game. It seems like I might have to start over in order to pass this point, and I’m not enjoying the game enough to do that. In general I don’t intend to abandon games this quickly, but this game is fairly well known — it has multiple translation patches and GameFAQs walkthroughs, so I don’t feel as obligated to “document” it as I might with other games.)