This is a familiar sight on the PCE side of this blog, another fairly standard RPG that follows the Dragon Quest model closely. Out of all of these that have some along, I still think Tengai Makyo is the best. This game has pretty much everything you would expect from this area — few strategic options in combat, very limited inventory, and primitive interface. The leveling is faster than other games and there’s a run button so it plays more quickly — also you can hold down the button to keep choosing attack, which, coupled with the emulator speedup, makes fights go very quickly.

The main feature of this game is the dragon, which I’ll say more about as I describe the game.

The opening scene is accompanied by voice acting, pictures, and slight animation. We learn that a comet has come to this planet and then monsters arose, headed by Dark Emperor Geel. The Monbit tribe opposes Geel but they are all killed except for one baby (Kurisu), who gets taken by a priest to a small village to grow up. 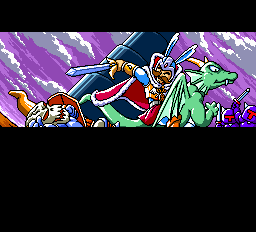 Of course this is the hero of the game — this plot is pretty cookie cutter. You have to go around to five continents to find five fragments of a Monbit Seal, which will help the last dragon grow up. The final boss seems to be Geel, so there aren’t any big twists. 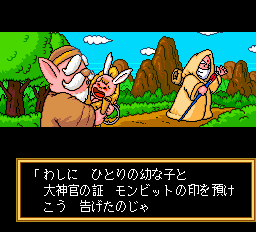 At first the dragon is just an egg, which consumes a spot in your very limited inventory (along with a letter from Kurisu’s father). Adding in 5 pieces of equipment, that leaves very little space for anything else. 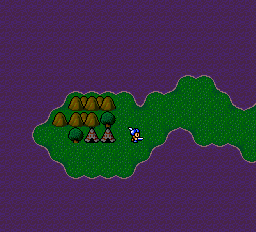 The combat system is your standard “hold down attack until the enemy dies” style. MP are very limited so you have to save it all for healing. Thankfully dying just takes half your gold, so you can progress quickly through the game. 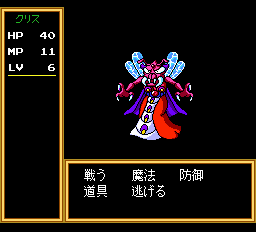 The battle scenes are pretty boring, with no background and little animation except for the bosses. The monster designs often seem inspired by Dragon Quest, although not quite with the charm of Toriyama’s monster designs. The spells also have nonsense names; another Dragon Quest-inspired feature. 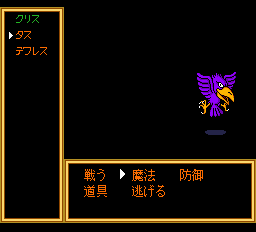 After grabbing the egg, it’s time to hunt down the first of Geel’s five underlings, who will have the first fragment of the Monbit symbol for me. Immediately the area grows dark. Kurisu must recover a stone statue from a boss in a cave that restores the light to the area. 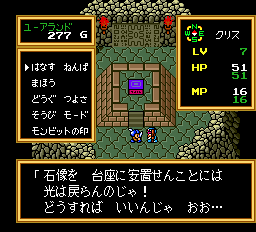 As you may be able to see from some of these pictures, the world design is interesting. Rather than humans, there are these animal-humanoids. Some are piglike, some doglike, etc. The Monbit clan is apparently bunny-like.

Once Kurisu restores the light, a few more fetch quests brings him to the castle where the first major boss, Eroe, resides. There’s nothing special about the dungeon, and Eroe himself is not very hard. It’s a common quality of these games that the random encounter rate is so high that you have to be pretty strong just to make it to the boss, and by that point the boss is a pushover. 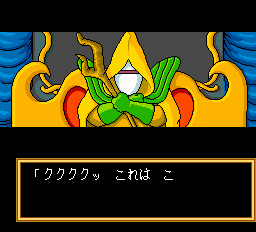 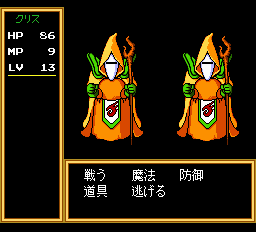 Once Eroe is defeated, Kurisu gains the first fragment of the Monbit symbol. I returned to a shrine and placed the egg on the altar, activating the symbol. 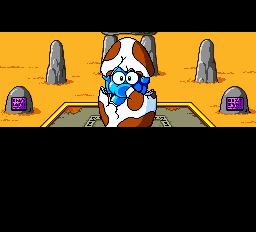 The egg hatches, and I have my dragon. Unfortunately the dragon is just a baby and can’t fight, although he gains levels. I named him Yoshi. However, as a baby he is often hungry. He emits high pitched squeals constantly, and the random encounter rate goes up. You can stop this by giving him milk, but the effect barely lasts any time, and inventory space is too limited. So I just muted the sound and ignored him — this would have been far more annoying if I weren’t emulator-speeding through battles. 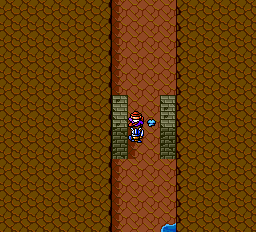 The tiny dragon is able to open a door that was blocking me from accessing the second continent. Here, the pattern is basically the same as the first — I had to find a statue in a dungeon to stop the lava that had flowed over the whole land. Somehow the towns instantly revive after that, and then I was able to go to the next boss’ castle. 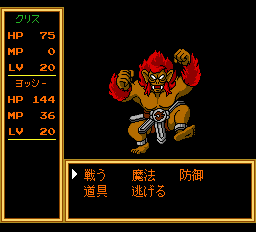 Because of the encounter rate with Yoshi, by the time I reached the boss I was so overleveled that his attacks all did 1 damage, and he was very easy to beat. Now with the second fragment of the Monbit seal I can grow the dragon to a child, and he can fight. 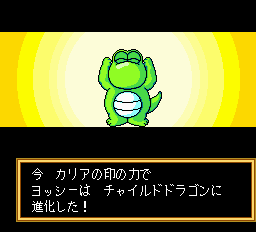 At this point I can also start feeding Yoshi fruits and then choosing various attributes to put points into, which will affect the skills and spells he can use.

This is where I stopped playing. The dragon system is interesting, but isn’t really enough to make up for the generic mediocrity of the rest of the game.