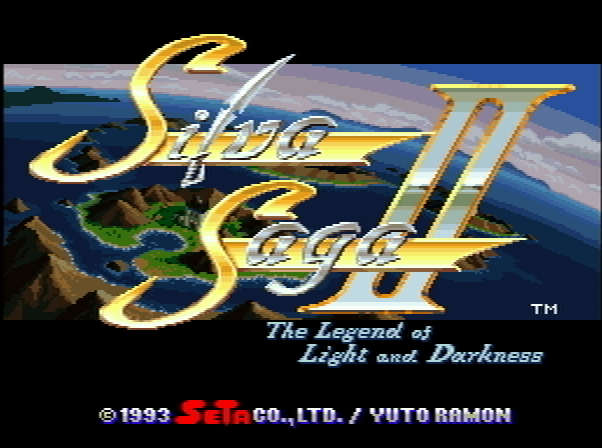 This is the third game in a series with Minelvaton Saga and Silva Saga I, and also has connections to GDLeen. All of them had scenarios by Yuto Ramon. The backstory in the manual is pretty standard for RPGs — a world with the Light God Harn and the Dark God Zuhl (who was the final boss of GDLeen, at least an avatar of his). Harn won a huge war and ushered in an age of light, but Zuhl continues to affect the world and so heroes of light need to arise occasionally to defeat Zuhl’s forces.

The Dark Prince Lagon was defeated by Prince Leon of the Palmekia kingdom, in a story told in one of the novels. Then in Silva Saga 1 (for Famicom), Leon’s grandson Kairal used the Sword of Light to once again defeat the darkness. This time, our hero is Kurisu (or Palsu in the instruction manual), who has washed up on the shore in Beta, a small village on a small island. Unfortunately the forces of Zuhl are attacking even here. Fortunately the woman who finds him gives him some basic equipment. He has amnesia and only remembers one thing: he needs to find Kairal, the Prince of Light who defeated Lagon (I think).

The game looks a lot like Dragon Quest. The interface is clean and easy to use for the most part. You can see what the strengths of weapons and armor are when you buy them! You can search most things in towns and houses, and a lot of them give funny or interesting messages if there’s nothing there. Sometimes you feel bad (I stole 120 gold from a house where the sick grandmother was being tended to by a daughter who had to work to support her).

The opening town has no weapon shop, but it does have a mercenary hiring location, where I picked up my first companion, Elmina.

You have three different parties that you can switch between in battle. Any switch automatically gives the monsters a turn. You have:

Only the currently selected party gains XP at the end of the battle. You can’t heal the mercenaries or the jinzo during the battle. But this does give some interesting dimension to a system that’s mostly just the basic AMID, although I have found that due to all your different party members, the mages have enough MP to actually use their spells. The main irritation is a system that I really hate — when the main character’s HP go to 0, it’s automatic game over even if everyone else is alive. Fortunately death in this game is not a big problem; you get returned to the last place you saved your game but with no penalty (other than being removed from wherever you were). This is a good offset for the annoying luck that the main character death system can introduce.

The first task is to do a little job for the mayor of Beta to prove yourself, and then he’ll give Kurisu his canoe.

Now with the canoe, Kurisu is able to set out on his quest to find Kairal. One odd feature of this game is how quickly people join and leave your party. Eventually (over halfway through) you get your final party, but before that it almost makes you dizzy how often people rotate. They share their skills and levels with the next person but you lose whatever you have equipped on them.

Unfortunately this also means the characters are very underdeveloped (including the silent protagonist). The basic flow of the first part of the game is that Kurisu travels to a place hoping that Kairal will be there, only to hear that he’s moved on. Generally there’s some quest or dungeon to solve and then he’ll be able to pass the next roadblock, or be given a warp item to go to another place.

Along the way, Kurisu learns that the Zuhl activity is now being handled by Zolde, the older brother of Lagon, who is also stronger than Lagon. Finally, he discovers that Kairal was killed by Zolde, but that Kairal knew another “hero of light” candidate was following him. He leaves behind a message for Kurisu, to find the Equipment of Light in order to be qualified to become a new Hero of Light. This just involves going to three different dungeons and getting the shield, sword, and armor of light (none of which can be equipped). Then we head to a shrine where the god Harn appears and grants Kurisu the power of the Hero of Light. 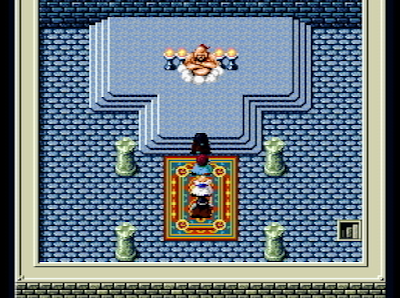 Becoming the Hero of Light raises Kurisu 10 levels, and also grants a new sprite (although the face picture on the status screen is the same).

Now all that remains is to kill Zolde, but of course it’s not that easy. We still have the problem of Kurisu’s loss of memory, and how can we break into the castle where Zolde is? Stay tuned!