Many of the battles in this game don’t really have much to say about them, so I’ll only highlight a few of the ones that were tricky or had interesting things going on. I do wish the Saturn emulator wasn’t so resource intensive because this is definitely a game where having a good emulator speedup would help.

Most of the battles in this area involved killing the 2 leaders, something that reoccurs in many battles. Ain and the crossbow girl both have paralyze moves that help holding off the enemies, but it’s perfectly fine to kill a few of them if you can’t handle just the two leaders without getting killed. The AI almost exclusively goes for Brian and Ain, which is both helpful and annoying.

I reached Fedayeen (the highest Law level) after this area, so it’s not especially hard to get. 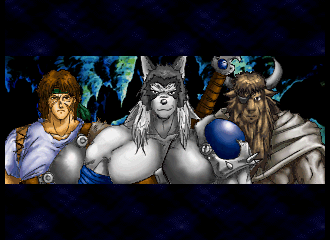 Mostly “beat the leaders”. Battle 22 has you get one unit up to the gate switch to open it. I used one of the flying units, and since most of the enemies were just going down towards Ain/Brian the flying unit was able to sneak in and open the gate. This doesn’t always work because some enemies will attack another unit in their range if they’re unable to reach Ain/Brian. Others won’t, even if they stop right next to an ally. 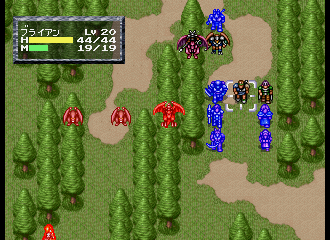 One thing to note about this area is that the troopers wandering around the circle can be avoided; even if they encounter you, you can retreat from the battle and then move on. This helps with time and losing too much Libra. 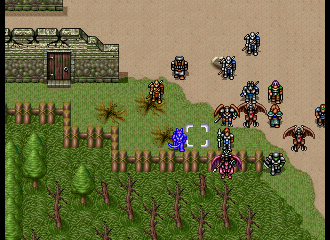 Battle 35 introduces the annoying Kemp Trooper, which will show up in many battles beyond this. The worst part about this guy is that his special move (which he always uses) kills anyone in one hit. By Area 8 I had enough HP on Brian to survive one hit with single digit damage, but this means you really have to work hard to keep Brian out of their range, and also Ain unless Ain can dodge the attacks.

For several of these battles I could not just do the mission objective; I had to kill all but one or two enemies just to survive long enough to reach the stairs or the top of the map, etc. This never dropped my rank below Fedayeen, though. 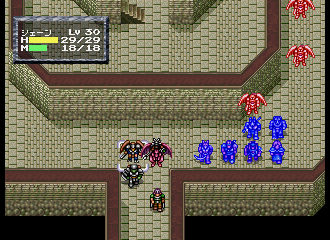 All the battles in this area are “defeat all monsters” so the game lags a bit here — I was reminded here of how slow and repetitive the game is when you don’t have the optional goals. The same rules apply as usual; watch for the units like the Kemp Troopers that can kill your units in one hit, exploit the enemy AI, and use a lot of special abilities. I subbed out a lot of units here; the mage was no longer pulling his weight so he got dumped for another fighter. 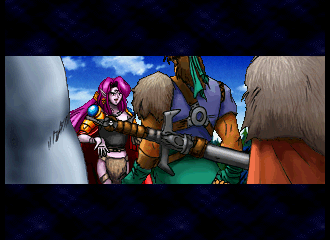 Five areas left. I know the post isn’t very detailed; one thing I always have trouble with is how much to write. I feel like writing detailed descriptions of all 70+ battles in this game would be tedious to read (and write!) and not of much interest to people who haven’t played the game. My usual assumption is that someone who hasn’t played the game should read the first post and then the wrap-up, although if the game can’t be played in English I try to give more detail.