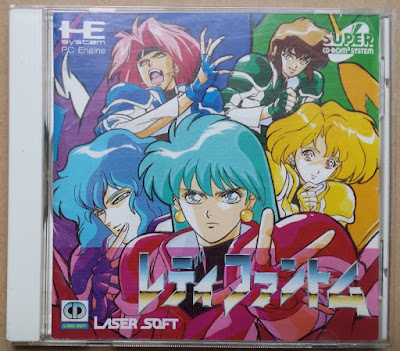 Next up on my list is another PC Engine game, although this time one that was originally made for the system. The PC Engine is an interesting console because it was a big seller in Japan, competing with the Famicom, Super Famicom, and Mega Drive. In the US it failed, though, and so most of the PCE games were never localized. This game is probably a simulation game rather than an SRPG, but it does meet my two criteria (developing story and named characters who level), so I’ll give it a go.

The Wikipedia article points out that it came out when there were a number of “girls in mechs” series coming out, most notably the Bubblegum Crisis OVAs. The game box emphasizes that they were trying to make something that was “faster” than typical strategy games — primarily this means the limited cast size (only 5 units on each map) and a speed-based turn system rather than player/enemy. Enemy turns could be extremely long and slow on strategy games (and SRPGs) at this time.

The person who sold me the game on Ebay included a page torn from an old Gamepro magazine that described the game. It has some errors but it’s interesting to read an a nice piece of history that I didn’t expect to get (it’s a big image so click on it if you actually want to read the text) 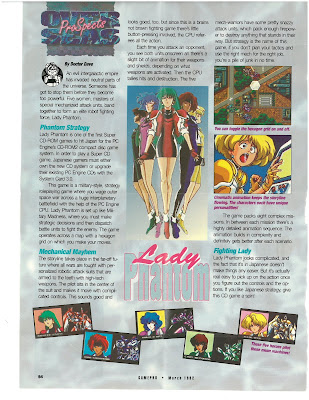 Because there aren’t any English walkthroughs, I wanted to give at least a little idea of how to play the game — it’s not especially hard but there are some potentially confusing menu choices.

The backstory as given in the instruction manual: The war between the Solon Federation of Planets and the Vat Empire suddenly ended in peace. Project Siren, which developed weapons during the war, continued, and resulted in the Lady Phantom squad. The five girls in the squad have been sent to the Galdoba area, which was on the front lines of the war. This area lost trust in both Vat and Solon and has become an unstable neutral area. 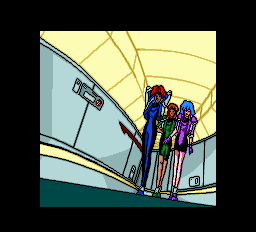 The Lady Phantom squad is relaxing after a mission when their superior (I guess) from Lezas Command tells them their next mission: on Megumes in the Galdoba area, there’s a resistance group that wants to overthrow the government and join Vat. We need to stop that from happening, so it’s time for a direct attack on the base. 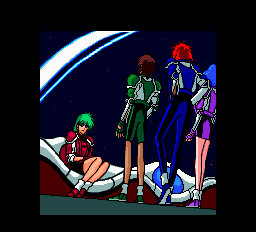 The five characters are Jennifer Sylkis (green hair), Dora Langenkamp (red), Ramia O’Niel (blue), Cindy Matsunaga (brown), and Elene Myer (yellow). At the start of the mission, the first thing you do is choose weapons. Each character can bring two weapons except for Ramia. 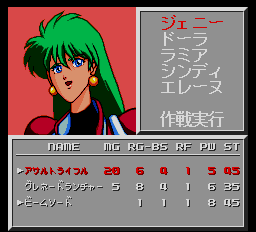 I find the default weapons are fine; typically if you just look at the MG part (which is number of shots) it should give a decent idea of the weapon. RG is the max range and BS is the recommended range for highest hit rate (although I don’t know whether it means exactly 4 or less than 4). RF is the number of shots per attack, PW is the strength, and ST is the hit rate. The manual claims it’s a percentage but 45% seems low for what I’ve seen actually playing so there must be other numbers involved.

Once you finish choosing the weapons, hit 作戦実行 at the bottom and the mission starts. 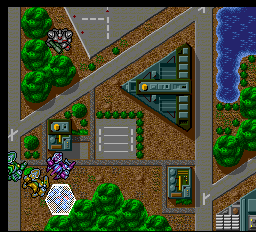 The game has a speed based turn system, although it’s a rather confusing one because people often get multiple turns in a row for no clear reason that I can see (I’ve seen as many as 4 actions in a row for one of my guys).

Each unit has five options: 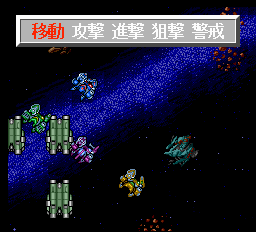 Move and attack are paired — if you do one, you have to do the other. So if you only want to attack or move, you have to pick the “advance” (move double distance) or “snipe” (attack with higher percentage) actions. Caution is defend.

Who you can attack depends on range, but also which way you’re facing and whether there are obstacles in the way. The game has a lot of walls and objects you can hide behind. There’s also increased hit rates for attacking from sides or back. If someone is defeated, they exit the stage and earn no more XP for that mission. At the end of the mission, each unit gets an automatic XP for finishing the mission, another 3 if they survived, and then XP for each unit they defeated (individually). 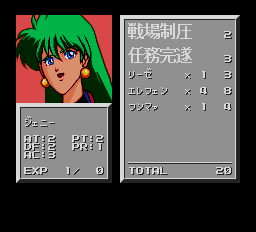 AT and DF should be obvious. AC is speed, PT gives you a better chance of counterattacking, and PR “affects various things” according to the manual.

Some stages, like the first one, have multiple maps. Anyone destroyed in the first map doesn’t come back for the second one so you have to be careful.

That’s more or less the gameplay — it’s relatively basic but I’m finding it reasonably fun so far. I’m up to act 5 now so I’ll make another post later in the week covering the next few stages.