There have been a lot of “2” games on this blog — Jungle Wars 2, Metal Max 2, and Silva Saga 2, with Seiken Densetsu 2 coming up in a bit. This game is part of a large franchise called the “MADARA project” that involves manga and video games on several platforms, and other media. The original game is for Famicom and has a translation by Aeon Genesis — they are supposedly working on this one as well but as of yet there is no patch.

I haven’t made a lot of progress but I thought I would make an update anyway, to at least introduce the game. The opening has an old warrior coming to a shrine of some sort. 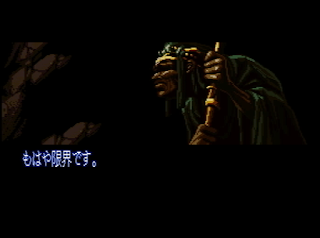 The forces of Miroku are ravaging the world, and there’s not much left they can do. But a woman appears from the flames. 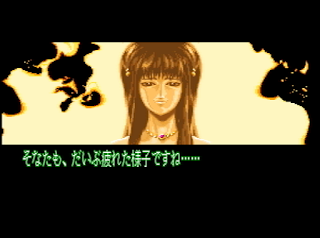 She assures the warrior that there are chosen ones who will soon be coming to fight against Miroku. 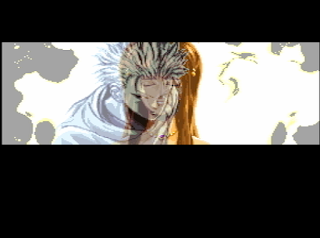 That’s our main character, a punk rocker. In the manual his name is Han, but if a default name is not provided in the game I use Kurisu instead. 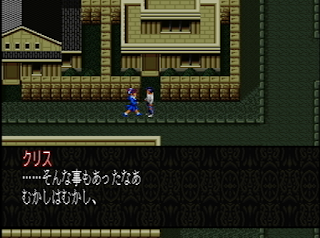 Kurisu meets his friend Subaru outside his house, and she drags him along after school to a seemingly haunted house nearby. She’s a budding journalist. Of course there we fight monsters, which are called “Mouki” in this game. 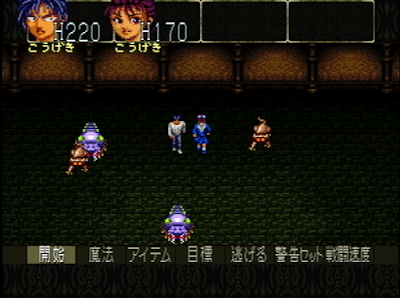 The combat system is automatic. The enemies and characters move around the screen and attack. You can pause the action to select targets (although it’s a little clumsy) or cast spells, or use items. But mostly you just watch everyone attack each other. I suppose this is a step up from just mashing the A button, but if the designers are going to automate everything maybe they should stop and think whether they can increase the strategic options of combat so that it’s not just mashing A. Visually the combat reminds me of something like Star Ocean, but you can’t directly control any of the characters. You can set a HP percentage for each character where the combat will automatically stop so you can heal them. It’s a smooth system but once again, it does seem a little odd just to watch everything happen. 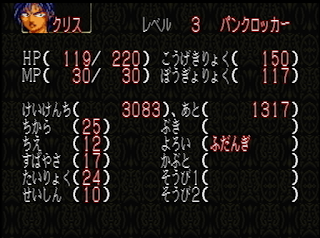 Inside the mansion we find monsters, but also books that mention previous fights against Miroku by heroes long dead (Madara and Kirin, and their descendants). I don’t know if these are references to the previous game or just lore for the series as a whole. 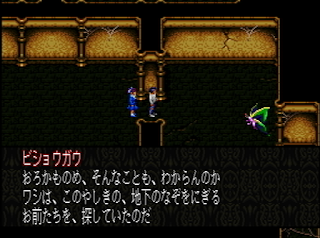 There’s a boss Bishogau, who seems to recognized Kurisu and Subaru. It’s not especially hard, although I was worried about running out of heal items — I couldn’t find any way to rest. There’s a broken sword on the second floor that increases Kurisu’s attack a little bit. But Bishogau went down, and we received a mysterious pendant that’s just like the one Subaru has.

At the bottom of the house, Kirin and Madara appear in illusionary form — apparently Kurisu and Subaru are their descendants and its now their turn to beat Miroku (how original). We need to find Sakuya-hime first, though. Kurisu is not interested at all, but this does fit with what Subaru has read in old documents her grandfather had. She wants to go to a shrine the next day nearby that is related to Sakuya-hime.

The next day, Kurisu can’t find Subaru, and so goes to the shrine on his own. Subaru is waiting there for him, but once they get into the shrine it turns out she’s an imposter who turns on him and attacks along with another Mouki. But Kurisu is able to kick them both to death. 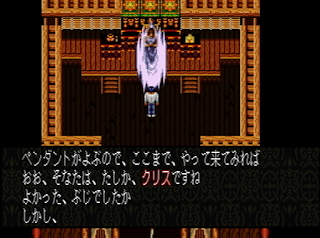 The enemies had another pendant — now that Kurisu has three pendants, Sakuya-hime appears and takes him to the other world where he will fight Miroku, although he’s only interested in saving Subaru, who has been taken to the world by Miroku’s agents. Sakuya-hime takes him along through a dimensional portal but Miroku attacks along the way, dropping Kurisu into a forest, where a man named Kara finds him and takes him back to his house. His wife Saria takes care of him. It turns out that Kara is also from another world (perhaps Earth?) but has lost his memory. Kurisu heads out to a nearby village to ask the chief if he knows anything about Subaru. 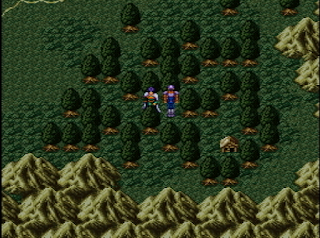 But the chief is unwilling to talk to any outsiders, at least while the Mouki are ravaging the countryside. So we go to a nearby tower to beat the monsters there. They completely kicked my butt at first and I had to grind quite a few levels to survive the tower. I hope this isn’t a pattern throughout the game.

Once the tower boss is gone, the chief is willing to talk to us but really doesn’t know much. There’s a Sakuya-hime shrine nearby but it’s empty — he suggests talking to an old sage in a cave to the north. Unfortunately the cave is under attack by a rabbit-like creature named Jato. Jato sics his minion on us. 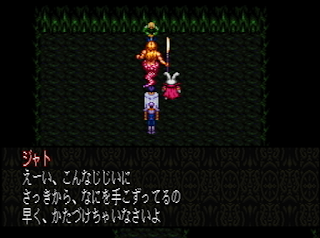 But we manage to clear out his minion, and Jato runs away. The chief tells Kara that in his passage to this world he was separated from his dark side, leaving only the light side behind. He sends Kara out to fight his dark side and reunite his two parts — Kurisu will meet him again, but possibly as an enemy. Now the sage tells Kurisu again he’s a chosen warrior blah blah, and sends him off to the next kingdom over to look for Subaru.

That’s all I played — it’s a small part of the game but it’s an OK game so far. I hope the battles will be more interesting when I get more people and some magic.