Barely halfway through the game and we’ve already reached Dalsis Castle, where Digos is. So obviously he’s not the final boss of the game. This map is very different from the Genesis version both in the enemies and the layout. All of your guys start at the bottom of the screen and you basically have to split into two sides.

I tanked the stage at first because I didn’t have the right division of units. Once I paid more attention to which units were on which side and assigned my soldiers appropriately, it was much easier. I was still struggling to level up Namu, who had fallen way behind. 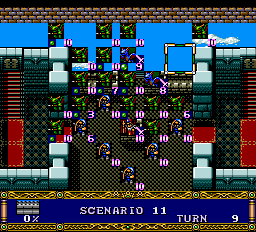 Partway through the stage, monsters appear at the top of the screen and start attacking the stage boss. Ledin realizes these are here because Langrisser has been unsealed. The boss doesn’t last very long against the monsters, but since the win condition is for Ledin to reach the top of the map we still have to take them out. 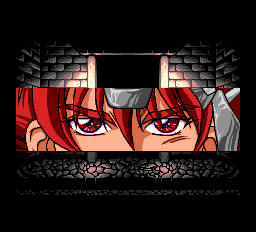 Time to beat Digos. His Emperor class is actually not that good compared to some of the other leaders, and his Armor Soldiers are not especially effective. Sort of an anticlimactic end for him.

Getting to him is a bit challenging, though. The two sides of the castle are separated, and you can’t control who starts on which side. The enemies are totally different from the Genesis version so I had to start, write down the enemies, then restart and assign appropriate underlings. Once I did that it wasn’t very hard, and Digos was taken down by horsemen.

Now we have recovered the Langrisser, but there’s still 8 stages left. The Langrisser itself is an equippable item that increases stats quite a bit.

Scenario 13 – The Town of Statues

Ledin reaches a town where Basilisks have turned everyone (including Lance!) into statues. The Basilisks will also stone us. The maps are diverging much more from the Genesis version than before — from here on out the story is the same, and each map is the same general idea, but the maps almost all have very different enemies, and often different layouts as well.

I was getting annoyed by the Basiliks turning my guys to stone so I just beat their leaders as quickly as possible. 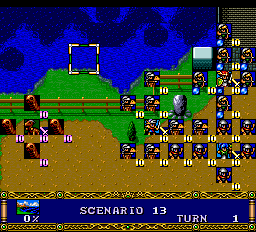 There are ants as well, and slimes. The ants go down fairly easily to archers and the slimes are the last hurrah for the Guardsmen, who I gave to Jessica. 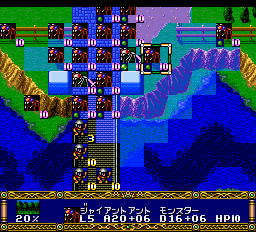 Lance joins the team afterwards, although he vows to even things with Ledin afterwards, if they both survive. 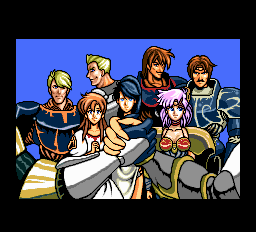 This stage has probably the biggest divergence from the Genesis version I’ve seen — as with the Genesis version there are a lot of werewolves in the stage attacking the townspeople. But there’s also a guy named Nagya with some skeletons who seems to have some control over the situation. 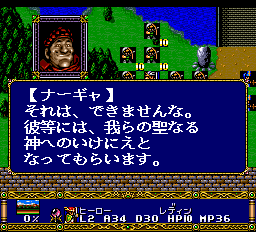 I used Monks for the first time in the game to deal with his skeletons. The werewolves made it to the church where the civilians were hiding and started killing them, but it takes too many turns for them to kill them all so there was never any big concern that they would die. Even though you can only send out 4 squads here it’s not that hard. 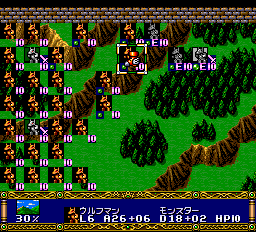 Scenario 15 – The Cry of the Dragon

Nagya is back again here, guarding a temple where the Efreet will come out to fight against the Grand Dragon, who is your main opponent here. Fortunately the civilians flee to the bottom left of the screen so they’re in no danger. 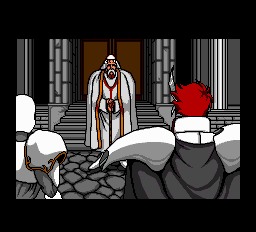 Once again, only 4 squads. I tried Monks again but they were ineffective against Nagya’s troops so I tried again with 3 archer squads and Ledin with Griffons. The archers were quite effective (especially Chris — I don’t understand why her underlings are always so good). The enemies come in off the lake but I hid in the mountains. 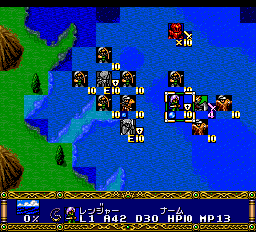 Once Nagya is defeated, the Efreet comes out and starts fighting against the Dragon. But he refused to come in from the water so I had to go out and fight him. I finally got Ramu to her secret class, the Ranger. Rather unusual class; she has good stats but can’t have any troops. Chris was also able to rank up to Princess. Now the only major character I have left to rank up is Jessica. She had fallen behind but I was able to get her up to High Priest in this level. Rather odd that for the secret classes, Chris has to go to Archmage and Jessica to High Priest — you would think it’s the reverse.