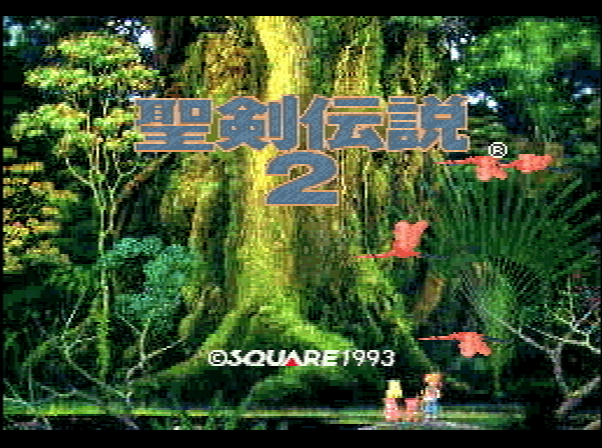 Final Fantasy Adventure was one of the earliest action RPGs I played, which was for the Game Boy. In Japan it had the additional title Seiken Densetsu (“Legend of the Holy Sword”), and that continued to be used in Japan for future entries, while the US went with other titles. This was Secret of Mana here. I remember playing this when it came out and enjoying it but being annoyed by a lot of the things that still annoy me about the game — I can’t really say it’s overrated because it does get a lot of criticism, but I feel that there’s a lot of nostalgia glasses coloring people’s memory of the game.

The game has a complicated development history. Originally it was planned to be Final Fantasy IV, with what we now know as IV being planned as V. Then this project was spun off on its own and planned to be a collaboration with Akira Toriyama called “Chrono Trigger” that would be a launch title for the Super Famicom CD add-on. When the CD project fell through, the game was redone as a regular SFC game. This forced the development team to scale back their plans a lot — this may account for some of the rough parts of the gameplay, as well as the second part of the game where dungeons seem to be lacking where you would expect them.

One aspect this did help was the music. The company always intended to spend a lot of effort on the music, but the game’s long development time meant that the composer, Kikuta Hiroki, had much more time to work on the music than would normally be the case, and he was able to revise and perfect not only the music but the sound effects as well. This definitely paid off; it’s still one of my favorite video game soundtracks and even decades after I played it I could remember certain themes like the Palace theme, the Gold City theme, and the final theme playing when you fly on Flammie.

It’s just too bad the gameplay is not more enjoyable. It’s not terrible, but here are some of the things that annoyed me at age 13 and still annoy me now:

Despite those complaints I do think it’s a fun game. I played about half of it this week. 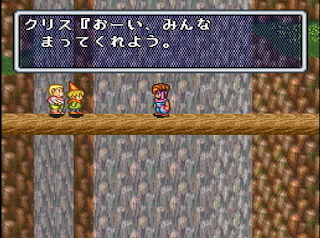 The game starts with Kurisu falling off a log and finding a sword, which talks to him. This makes the village angry and they kick him out, but he follows the knight Jema and begins a worldwide quest to protect the Mana Seeds. 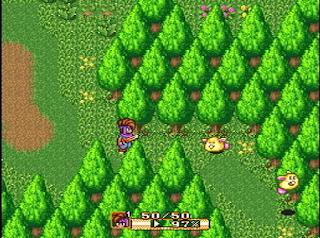 There’s a little freedom of order in the early game but I got the girl first: 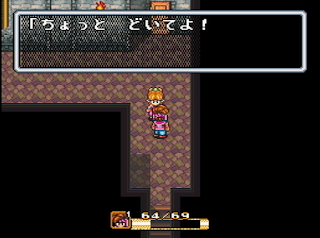 I named her Sakura, and then the other character I named Sprite (I was never sure whether Sprite was supposed to be male or female). 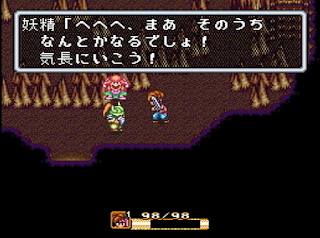 The early game, before you get magic, has some tough bosses, especially the tiger boss in the witch’s castle, which I didn’t get a screenshot of. He has this cheap tactic of sitting up on the walls and casting spells and fire breaths, which you have no chance to dodge. If you get unlucky and he just sits up there for a long time you can’t do much — it is possible to hit him with distance weapons. 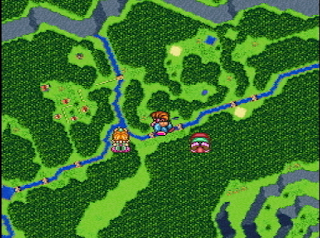 The variety in the weapons is fun (sword, axe, spear, javelin, whip, bow, boomerang, and fist) since they all have different styles of attacking. I wish the weapon levels were more important — I usually try to get the main guy to have the highest weapon levels in everything even though there’s no real point to it.

Eventually we help out Undine, get magic (for the girl and sprite), and find out the main purpose of our quest — to fuse the mana sword with the eight mana seeds, and stop the Mana Fortress from being resurrected by the evil Empire. 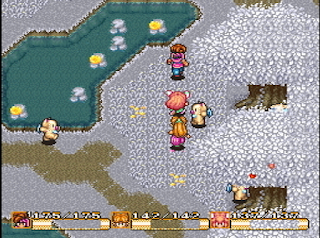 So far I have three of the seeds — the water, earth, and wind palaces. I just recovered the fire seed from the cold area and now I have to return it to the fire palace.

This is kind of a short update but I’m not sure these well-known games need as detailed treatment (and I’m kind of busy this weekend — hopefully next Saturday when I have the game finished I can be a little more detailed), so I’d love to hear all your experiences with the game in the comments.