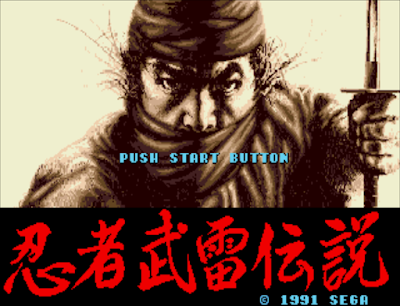 I don’t have a great deal to say about this game so I’m going to combine the post and review into one. This is the first game for Mega Drive (Genesis) I’m playing — I never had a Genesis as a kid so I’ve played almost no games for the system. Looking at my list I will be playing 7 or 8 games for the system (including the CD games).

The story of the game is basic. The main character is half-Japanese half-English, although this doesn’t seem to have any relevance to the plot. He gets trained as a ninja, and then has to rescue a lord’s daughter Yayoi from the warlord Oda Nobunaga. Nobunaga has been possessed by the demonic energy of a sword that he was trying to gain the power from. Beyond this, the story is mostly “go here and do this” leading up to defeating Nobunaga.

This game is the most difficult one I’ve played so far, but I don’t like the way the difficulty is done. A number of design choices (or accidents?) make it so that you have to manage extremely limited resources to level up and buy equipment for specific characters in order to survive the final stage (and some intermediate stages as well). This requires either a walkthrough, or playing through the game multiple times. The game is quite short, so replaying it wouldn’t necessarily be a huge issue, but it’s not what I like to do in an SRPG. It’s frustrating to me to be unable to continue because I didn’t know that a later stage would require a specific character at a high level. Some people may like this kind of tactical planning and replaying, but to me it’s just poor game design. 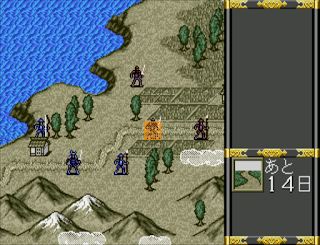 There are three main things that create this kind of difficulty. The first is that money and XP are both very limited, and there’s no replaying stages. The second is the time limits to beat stages, especially the 22 turn limit on the final stage which is quite severe (and entering the palace to actually complete the stage takes 3 turns so you really only have 19). The third is that attack and counterattack happen at the same time, so even if you attack a 1 HP enemy, he’s going to get a counterattack as he dies. On top of all this is the permanent death and lack of any in-battle save. I used save states quite a bit to play this.

There’s a walkthrough on GameFAQs but it only tells you what you need for the final stage, and gives you the compatibility for units, which is very important. I agree with the walkthrough (and a Japanese site) that for the final stage you really want the Ninja, both mounted samurai, and both spearmen at level 9 with the best equipment, and the two healers at a decent level (6 is fine). You don’t absolutely need all five characters at max level, but they need to be close (and the Ninja has to be at level 9).

To do this you need to save most of your money for the second to last stage, for training and equipment.

This is basically what I did on each stage:

Stage 1 – I did not use the archer at all in the game. I bought new weapons for the ninja and spearman.

Stage 2 – I bought armor for the spearman. This is in preparation for stage 4.

Stage 3 – At the beginning of the stage you have to pay all your money for an item, so I trained the spearman up to level 3 or 4 beforehand. He was definitely 4 by the end of the stage. Make sure to use all of the priests’ MP on every stage to level them up.

Stage 4 – This is the second hardest stage in the game, and if you don’t have a strong spearman you’re not going to survive the samurai onslaught. Even with a good spearman it’s not easy because you have to get the unit placement just right.

Stage 5 – I bought the Ninja the shuriken, which is nice because it lets him attack without getting a counterattack.

Stage 6 – Nothing special, just don’t spend money and try to focus all the XP on the mounted samurai, spearmen, and ninja.

Stage 7 – I bought a spear for the spearman. 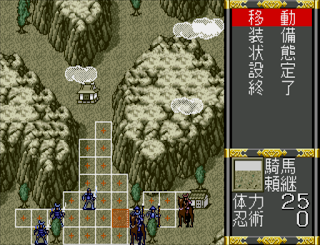 Stage 9 – This is where I bought the best equipment for the 5 main units (except the Ninja, who gets the best sword after this stage), and trained everyone to level 9. This took most of my money.

Stage 10 – I think you can be somewhat less than optimum on this stage because I did a pretty poor strategy but still managed to beat it on the last turn. Yayoi doesn’t have to be saved by the Ninja so it’s better to take him to the right and some other units to the left. The annoying part is that you need 3 turns after beating Nobunaga to win.

So I wasn’t a big fan of this game. It has some good ideas, but I don’t like it when the difficulty comes from restricting your strategic choices to the point where there’s basically one path through the game.