This game is another in the long running Megami Tensei franchise. In the way that Majin Tensei was a counterpart to the Shin Megami Tensei games, this is a counterpart to the Last Bible games. The three Last Bible games are all based on the MT idea of summoning and recruiting monsters, but they take place in fantasy worlds rather than the dark, post-apocalyptic settings of the MT games. The storylines are more simplistic good vs. evil fights rather than the more nuanced MTs. These statements apply equally well to Another Bible. 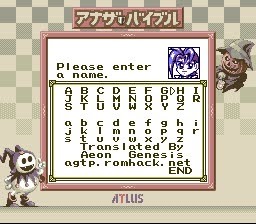 This is also the first of a few games that I will be playing on the Super Game Boy. This was a Super Famicom cart that you put a Game Boy game in. I recommend the series of posts Fuck The Super Game Boy to learn more about it.

For Another Bible, we get a custom border, as well as custom palettes for the character pictures (so that appropriate colors can be used for them). In the screenshot below, a separate palette coloring has been applied to the bottom left square to provide colors specific to the character. 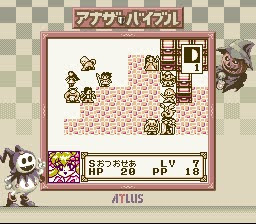 You start out with a main character, and quickly acquire a number of other human characters, including the female main character (in the above illustration). She has the ability you need to recruit monsters to your side. Unlike all previous MT franchise games, this game has no talking process for recruiting the monsters — you simply use the ability and they join. You can only have one monster of each type. 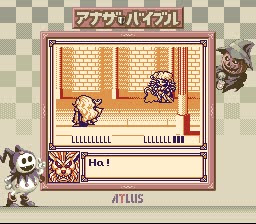 The monsters gain levels just like the humans, although they need more XP. When they reach level 3, they will upgrade to a new monster in the same type, to a limit of 3 or 4 transformations. They also get 5 bonus points for states instead of 2 when they level up, so they can be quite powerful. The human characters are pretty good too, although given the theme of the game I tried to use monsters as often as possible. 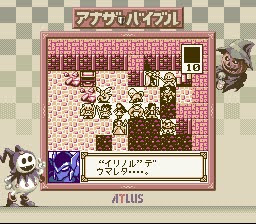 There is no monster combination system. Instead, there is a way you can combine monsters with robots. But I found this system underdeveloped — I didn’t even get a robot until very late in the game, and by that point my monsters were so good it was hard for me to see what the benefit was of combining them with the robots. I did one combination but I didn’t notice anything special about the result. 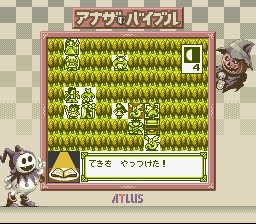 Speed is the most important stat in this game; as in Majin Tensei 2 you get two attacks if your speed is high enough compared to the enemies.

My party was usually a full team of monsters, the main character, and the Freon/Ozone sisters because they can talk to each other to double their attack power, have healing magic, and a range 2 attack with their spear.

The story is quite simplistic; monsters from the Beast Cult are attacking and the hero decides to save the world. There is some complication later and a few small twists but it’s a kiddie-grade plot that barely serves to move the narrative forward. 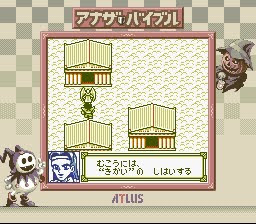 Between many stages you can stop at towns and gain information, as well as buy items. The most useful item is the Joy Coin, which gives the wearer 5 xp per turn. 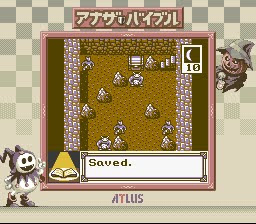 One other point of interest is that some of the levels are multi-level, with the staircase leading to a new place. Unlike the other MT games, each unit has to move up the stairs individually. This leads to a very slow fight in some cases, especially a few stages with empty floors.

Overall, this is a fine game when you consider the period it came out and the fact that it came out for a handheld system. But I’ll repeat the same thing I’ve said about the other handheld games I’ve played. The primary selling point of a game like this, that it can be played away from a TV, is no longer relevant in 2020. This means games like this have aged far more poorly than the console games, and I’m afraid for most people this game will not be worth playing. It’s not bad, but it’s not particularly good either.