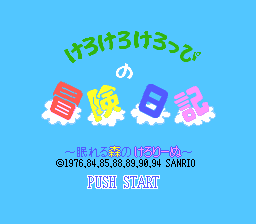 This is an RPG intended for very young children, using Sanrio franchise characters. 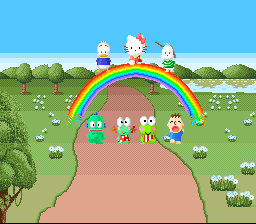 The story focuses on Kerokerokeroppi, the frog, whose girlfriend has been kidnapped by the wizard Jers, who was attracted by the donuts she brought on their picnic. 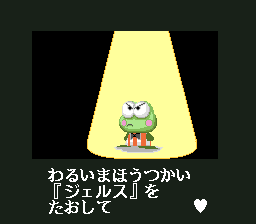 The game is very short and simple — I beat it in about 2 hours and 15 minutes. You can’t get a game over except against the final boss; if you die otherwise you just exit the battle and keep playing. There is no equipment, and no levels. You can buy items to use in battle but most of them are useless. Instead of levels, you just gain stats at fixed points during the story. 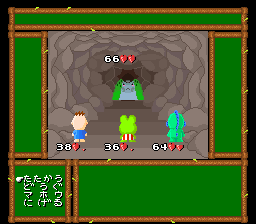 Despite this simplicity I found the game strangely unfriendly at times. You can recover your HP by going to Kero’s father (who helpfully appears in each town), but MP are not easy to recover. I used up all my MP early in the game and it was halfway through the game before I finally found a place where I could recover it. There’s no way to know what any of the items do (I assume they were explained in the instruction booklet, though). Once you get into the final dungeon, I did not see any way to recover HP or MP, and you can’t leave, meaning that you could work yourself into an unwinnable position (unless I missed something). Saving is done through passwords rather than a file. 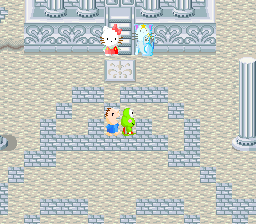 The game is essentially series of fetch quests. You first need to collect friends to be able to fight Jers. Then, you need a couple of useful items — an alarm clock to counter Jers’ sleep magic, and a cold fan to stop his heat. Finally you need to get a magic mirror to enter his castle. At the beginning of the game there’s a small world map to walk around, but once you get to the mid point the game just warps you to the next place you need to go. 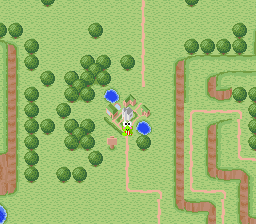 The final boss can be challenging if you run out of MP and have no items, but as long as you can use the “killer” spell to double attack power he goes down in a few hits. 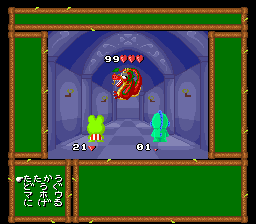 There’s really no reason to play this game — it’s so simplistic and short that it really provides no fulfillment. The RPG elements are so slight that a lot of times you feel like the game is just moving along without you really doing anything. I guess if you’re a big Sanrio fan you might like meeting all the characters in the game, I guess.
Next we’re back to two PC Engine games — Princess Minerva, which has an SNES port so I’ll most likely be playing the whole game. The second is a Monster Maker game which has the reputation as one of the worst RPGs on the system.