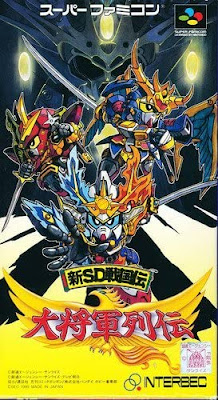 SD Gundam is a huge, sprawling offshoot of the already huge Gundam franchise. Within the SD Gundam franchise itself, there are all kinds of sub-series. One is the “musha Gundam” series, with characters modeled after ninja, samurai, etc. The series here is Sengokuden, which does not refer to the Japan sengoku period, but rather the Warring States period of China. All of the Gundams are modeled after Gundams from the main Gundam series, but are written with Chinese characters to make them seem Chinese. For instance, one of the first main characters is 衛府弓銃壱, read as efu kyuujuichi, that is, F91. Other times it’s a meaning translation, like 翔狼士 for Doven Wolf. I’m not sure what the setting has to do with the Warring States period, though, since all the characters are derived from Gundams rather than historical figures. 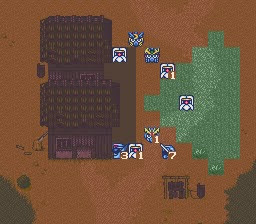 The series began as a manga with action figures and other property, then this game came out. It apparently centers on the story of the second Sengoku-den series, although through optional battles it incorporates elements of the other series as well. I will begin with the story and characters, which are the most disappointing part of the game. 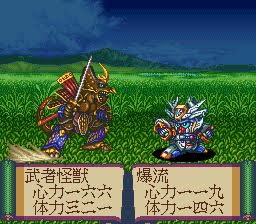 They put quite a bit of effort into cramming as many of the series’ mechs as they could, including over 100 of the mechs from all the Sengoku-den series. While this may have been a lot of fun for fans of the series, it means that if you don’t know the franchise at all it tends to just be confusing. Only a few of the characters are even slightly fleshed out, and by the end I really didn’t feel like I even knew who the main characters were. The story is bland — you set out to defeat the Dark Emperor, and every battle is just showing up in a place and beating the Dark Emperor’s forces. There are one or two small plot developments but nothing major. 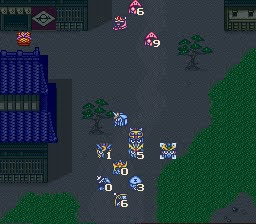 In addition to the 30 main stages, there are 20 optional stages (including a secret final stage). These stages sometimes involve a magical time travel to the past to fight historic battles, which allows them to insert Gundams from the previous series. Once again probably delightful for fans, but is hard to appreciate for me. 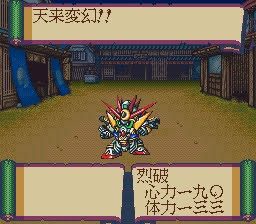 One of the things I like about Super Robot Taisen is that they do a good job of trying to introduce and develop the characters even if you haven’t seen the series. There are so many that it can become overwhelming if you aren’t familiar with a large portion of them, but at least they try. Here they don’t even try. The amount of content in the game means that this is more than just a cheap cash grab, but they weren’t trying to reach out to anyone beyond people who were already fans. 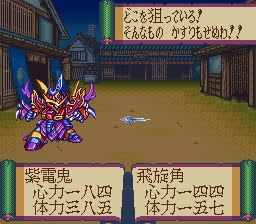 But the designers’ attempt to appeal to the fans of the franchise means that they put a lot of effort into the graphics, and it shows. The sprites of all the characters are quite good for Super Famicom, and when you compare them to Super Robot Taisen 4 which came out the same year, they’re much better. They also took the time to put all the attacks for each unit as well as decent animations for each one. This is definitely a strong point of the game.

The design of the interface also fits the Chinese them. Instead of arabic numbers, which are used in every game, this uses the Chinese characters to display everything — so 78 hp is 七八. Terms that would normally be done in English or Japanized English are done using Chinese-derived terms. So damage, rather than ダメージ (which is just the English word “damage”) is 痛手.  All the option menu things like BGM and animations are also in Chinese. The Chinese numbers for the stats take a lot of getting used to but it contributes to the theme. 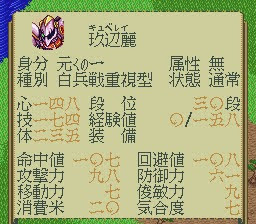 Next, the gameplay. I’m somewhat hampered in covering this. Due to the coronavirus I was not able to acquire the instruction manual, and there are parts of the system that are still opaque to me even after finishing the game.

The system runs on speed-based turns, although I don’t know whether a unit can take more turns than another unit. I don’t think so, but I’m not sure about this. A nice addition to this game is that there are numbers from 1-9 that show who is going next. Multiple people can have the same number so you can’t be sure exactly who is going to go next, but this provides more clarity than a game like Shining Force where you can’t always plan your moves fully. 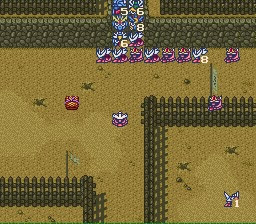 The system is standard SRPG; units can move, and then use attacks (with varying ranges, including AOE attacks), special moves, and some units can cast spells. Spells use SP, and the special moves can each be used a certain number of times each map. Moves have an element like Fire or Ice, or non elemental. They can cause status effects, or take away enemy SP.

The main problem with all of this is that the game provides no indication of what the power of each move is. I often found that moves did surprisingly low, or surprisingly high damage. I assume this has to do with some kind of weakness or strength of the monsters, but without the instruction manual I had no idea what the affinities were other than obvious things like Fire->Ice. Ranged attacks are nice because the enemy doesn’t get to counter, but I could never tell how the ranged attacks compared in damage to the melee — often they didn’t seem very different. 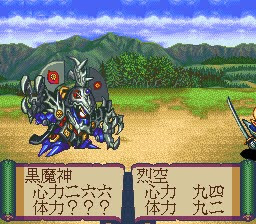 This also means I could not tell whether the last set of stages was poorly designed, or whether I just didn’t know enough about the system to tackle them effectively. I found that by this point the grunts were so strong, and did so much damage with their range and AOE effects, that it was effectively impossible to beat them. I could take a few out, but the only way I managed to beat the final stages was that eventually the boss will move towards you, and he always did it early enough that I could send everyone up in a big suicide attack to beat him before he killed all my units. If these had been “destroy all enemies” or if the bosses had stayed put, I’m not sure I would have been able to win the game.

There is an overworld map that you move around on. You can stop and buy healing items and some equippable things. The money is also used to pay your guys to join each fight, so sometimes you have to choose to take fewer units into battle than you can. The higher level a character is, the more they cost.

So my overall view of the game is ambiguous. The design and graphics are nice, the story is poor, and the system is complex but I never fully understood it because I didn’t have the instruction manual and the in-game assistance was not good enough.