OK, let’s get this started.

As the introductory story indicates, Ledin begins in the castle Baldia, under attack by the evil forces of Digos. The goal is simply to escape the castle with Ledin. I feel like this should have just been a cinematic scene rather than a stage — it’s odd to make the first stage one where you basically can’t do anything. There are entire walkthroughs on GameFAQs for how to actually beat the enemies, but I didn’t want to start out using that much help so I just stuck around for a few turns to let Jessica get some Xp and then left.


Your other character is Volkoff, who is the Jeigan character of this game. He’s very powerful but cannot gain any XP or class change. Rather than trying anything fancy I just bought no soldiers and escaped. 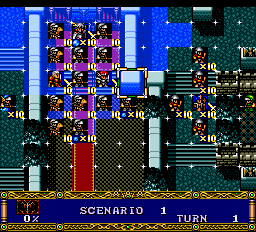 Namu the fighter leads us out of the castle while Ledin’s father the king stays behind. Ledin vows to come back and rescue his father later, but he soon meets Chris (Kurisu, a mascot for this blog apparently!), a priestess who is on a pilgrimage. 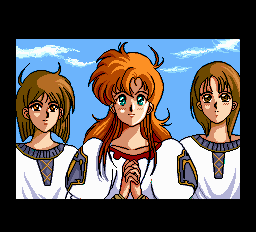 The stage might seem tricky because you have to protect Chris, who tends to head towards the village at the north. But from what I could tell she’s basically unkillable — her priestesses will get slaughtered but the enemies had trouble doing much damage to her, and she would almost always heal on her turn if she were hurt. I imagine multiple commanders targeting her at the same time could have taken her down but that never happened. 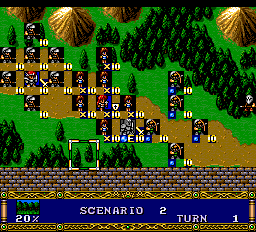 That being said, I did a lot of resets. There’s a “memory save” that you can make anywhere that lasts as long as the power is on, so I reset as often as I needed to to make sure that Ledin got most of the kills. Even giving Volkoff the weak bowmen, he still could often kill everything in one hit. But in the end I was able to get Ledin enough xp to level him to 10 and class up to a Lord. 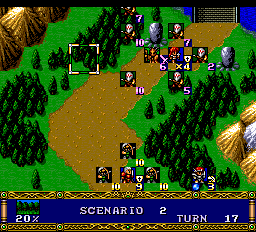 Hawking and Thorn will come from the top left to steal your XP but I was able to get up there soon enough to at least get the leaders. Hawking recognizes Ledin as the prince and offers to help him recruit troops to take back Baldia castle. 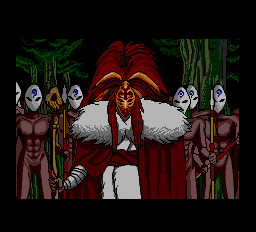 But that night, the town comes under attack by the same bandits that attacked in stage 2. So this stage is in the town, with a lot of NPC units and townspeople to protect. I probably was too cautious in this stage — I was worried about the townspeople dying (since that loses you the stage if they all die). I killed some troops with Volkoff and didn’t get Ledin as much XP as I could have. 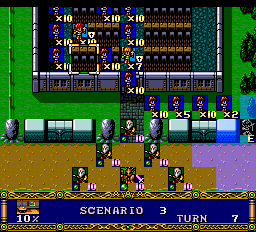 Chris heads into the church and the townspeople follow her there. I think that even with the reinforcements that come in near the church, the doorway chokepoint would have protected enough of the civilians that I could have taken my time and gotten over there to get more XP with Ledin. But it’s not easy when there are 5 hero groups on the map, 3 NPCs, one Volkoff who can’t get XP, and then Ledin. I would have liked Chris to get more XP but all she does is run away. 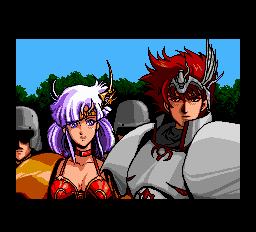 An interesting scenario; Ledin is heading back to the castle. Namu has met him in the town and told him that Baldia has fallen, and the King rode out alone to fight the enemies. Ledin decides they need to go through the Spectral Forest to get back in time.

All the monsters are slimes, and your guys can barely damage them. So I sent out the three leaders with no underlings and ran away. In 5 turns, Chris and another dude come in with “Guardsmen”, who apparently use some kind of fire attack that’s effective against the slimes. They’re NPCs as usual, but they can chew through all the slimes. I got a class up for Chris to Bishop.

There are multiple class paths for each character; I’m just going to take the one that leads to their secret new class. 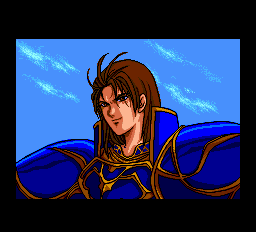 On the way to Baldia, we meet Lance’s army. This is the first stage that has no NPC player units. All five of the leaders (Ledin, Volkoff, Namu, Chris, and Thorn) are under my control. Thorn has limited class up potential so I want to use him less often.

There are a lot of horsemen in the enemy forces, so I made sure to send Volkoff and Ledin out with Light Elves (who are effective against horsemen). I split my force, sending Ledin and Namu up to the top, and Chris, Volkoff, and Thorn to the right. This is the first stage I really used magic — Chris’ “Zone” magic removed the huge bonuses Leon granted to his troops, and Ledin’s Shield magic helped Namu fight a bit, although I was not able to get her class up. 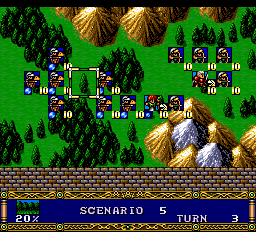 The idea in that picture is to weaken the enemies with Volkoff’s troops and then kill them with Chris. It worked a lot better than I expected.

After the battle, Lance tries to attack Ledin but Volkoff gets in the way and takes the hit…this looks like the end for Volkoff but we’ll find out next time.