I got so into the game sometimes I forgot to take screenshots…sorry.

After burying Volkoff, Ledin comes back to retake his castle; King Ilzack is presumed dead, so it’s sort of a hollow victory 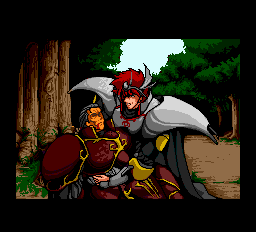 The team gets split into two sides, so it’s important to have a balance of units in this stage to take care of the Dark Elves (archers), Soldiers, and Horsemen. In the end I didn’t find this stage very hard. Even the Lord on his throne doesn’t have much against the whole team — this tends to be true in these games, that once you get control of the battle by beating most of the units, the last few (even a boss) aren’t very hard. I’ve found that a lot of times you can beat a boss just by throwing all your underling units at it because even if they die, as long as they do at least a point or two of damage it reduces the boss’ effectiveness and makes it easier for the succeeding troops to do their jobs.

Chris is surprisingly effective as a direct fighter. One of my biggest problems with this game is that I feel like combat is unpredictable in many ways. There are some general guidelines as to which units are good against other units, but sometimes I think I’m going to do well and get my ass kicked, while other times I assume I’m not going to do anything and have a huge victory. 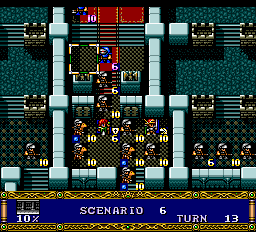 Scenario 7 – The Hero of the Fort

Ledin decides to chase the units fleeing from Baldia and try to fight them all the way to Digos.

Albert the Knight is defending a fortress against attack. From what I saw in the Genesis version you do actually have to go quickly, but for me Albert never even came close to being under threat of dying (which loses you the stage). This was a hard stage, though.

The most difficult part of the stage for me is the Lizardmen. They’re quite powerful — in the water I had trouble even attacking them with Tyler (Crocodile/Serpent Knight with Mermen). If you lure them onto the land they’re still formidable opponents, and you have to cross a bridge to get to the main area. They don’t necessarily like coming towards you until you start crossing the bridge.

A useful spell is Zone, which cast on a leader, removes the bonuses they give to their units. These bonuses are often quite substantial. Unfortunately Zone can fail, but since you can reload the save, you can just keep trying it.

There are also reinforcements of Lance and another unit, all with Horsemen. I had Ramu with Elves, which are not very useful on the stage as a whole but once the Horsemen come out they can do good damage.

I found this to be a pretty straightforward scenario; a mix of units to deal with the varieties of enemies, and I was fine even with Lance and his reinforcements.

Scenario 9 – The Rapids of Warus

This scenario is annoying. The top and bottom half are separated by a large water area that most units (Tyler excepted) cannot cross at more than a square or two at a time. You first have to deal with lizardmen that come towards you — it’s frustrating to me that Tyler is unable to fight them directly with his Mermen. Instead I just had to draw them on to land and take them out with Horsemen from other guys. 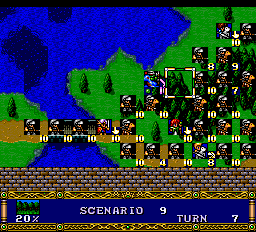 What Tyler is good at is taking out enemies that charge at you across the water, which in this stage is mostly just Lance’s reinforcements. Other than that, it’s a matter of taking out the Lizardman and the reinforcement Kraken, then taking everyone over the water at a snail’s pace, and finishing off the guys at the top. 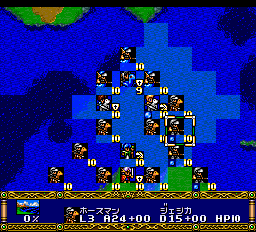 Scenario 10 – Castle on the Lake

At least this time they give you a bridge to cross. There are Elf and Soldier reinforcements so I left some appropriate units behind. First job is to draw the Lizardmen onto land, although only one group will come at the beginning. The others will sometimes attack on the bridge and sometimes not; it’s hard to tell what influences that. 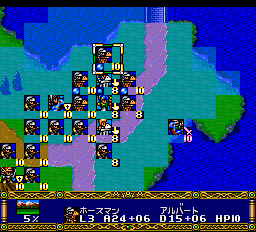 After reaching the castle itself, it’s the same basic enemies as the previous stages.

Namu is seriously falling behind in power so I need to work on her. She, Chris, and Jessica have the hidden classes (Ranger, Princess, and Sage respectively). I still have 10 more stages to attain those classes.

I’m not saying a whole lot about the story because up to this point there really isn’t much — Ledin escapes the castle, recruits some troops, comes back and retakes the castle, and goes to beat Digos. There’s little dialogue beyond what you are doing next, and not much character development.