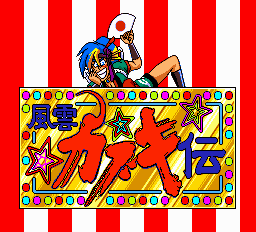 Here we are with another Tengai Makyo game. It came out just one year after TM2, and stars Kabuki Danjuro, one of the characters from that game. It has a lot of returning characters from both of the previous TM games, so if you’re a big Tengai Makyo fan I imagine this is a great game. For me, it’s not. The gameplay has not changed at all, so this is still basically a system from 1989, which is showing its age in 1993 compared to other games on both the Super Famicom and the PC Engine. The irritating inventory limit (one of the most severe of any game I’ve played so far) is still around, and the combat is still pretty basic. They changed the look of the combat to a side-view FF4 style, but this doesn’t change the system at all. It also doesn’t help that I find characters like Kabuki annoying, and so I’m not especially keen to play a game where he’s yelling at me the whole time.

As with the previous games, this game has a lot of cutscenes, voice work, and good music. It opens with Kabuki acting in a performance, saving some women. 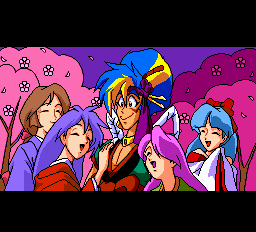 Later that night, Orochimaru (from TM1) sends a letter asking Kabuki for help, and then visits him in person. Apparently the Daimonkyo from the first game are back, and Orochimaru wants Kabuki’s help in defeating them. 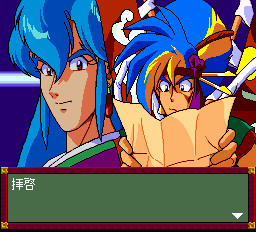 Kabuki refuses, until that night when all the women in Kyoto disappear. Now he’s interested, and vows to get them back and defeat the Daimonkyo again. The first task is to break into Joko’s mansion; he has usurped the rich Tycoon’s seat (from the first game) and allied with Daimonkyo.

Eventually Kabuki makes it into the mansion and fights Golden Gambie. Once Kabuki beats him, Gambie loses interest in serving Joko and leaves…causing Joko immediately to surrender. 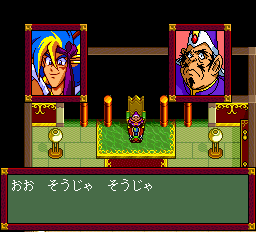 Now on the way to the next place, I got three game overs from random encounters, and that was as much as I wanted to play the game. The second half of the game is in London, which sounds interesting, but I just don’t like the game system enough to play it more. If you liked the first two games and are fine playing the same thing again you’ll enjoy this.

Tengai Makyo will next appear on this blog in quite a while when I get to Tengai Makyo Zero in late 1995. It will be interesting to see how a franchise that banks so much on the presentation will handle the shift to the Super Famicom, and whether they’ll finally update the game system.

I am now caught up to the SFC games! This game will return to being mostly Super Famicom from here on out. I’ll make a post in a few days about how things will go.

(Actually I noticed that the next game on the list would be Langrisser for PC Engine, which I am playing on my other blog strategyrpgs.blogspot.com — an interesting coincidence!)