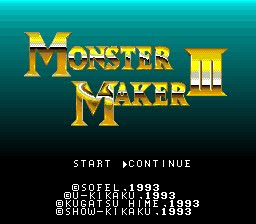 Monster Maker is a franchise that started out as a card game but grew to include a CCG, a tabletop RPG, manga, and such. There were a number of video games based on the franchise as well. The first couple of games used card mechanics and apparently were somewhat innovative, but after that they switched to a regular RPG format.

Monster Maker 3 seems to get a lot of criticism for its high encounter rate (even for 1993), unfair random encounters that can kill you quickly, and large dungeons with traps. This site has good maps for the game, which are useful. At least the fights give good rewards so that you level quickly.

The game begins in the manner of Dragon Quest IV — you name your hero but then have to go through some preliminary chapters that introduce other characters.

Chapter 1 begins with Alshark, a fighter who hopes to become a knight. He gets his chance when the king puts out a call for people to defeat a monster in a nearby castle, and save a foreign princess. 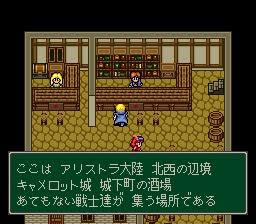 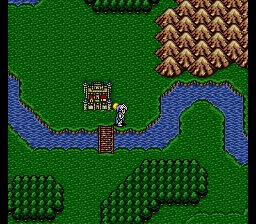 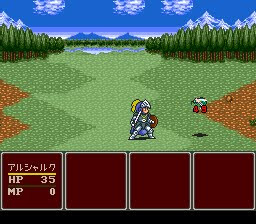 As I said before, the random encounter rate is very high. Another problem is that twice now the game has frozen during combats, so I will be using bsnes’ auto save state feature to deal with this. In combat, the characters move around the field and can only attack within their range. So it’s a little more than just the usual AMID battle system but it boils down to basically the same thing. Unfortunately it has another feature of older games in that the magic users’ MP is so low that you can’t really use their spells freely.

Make sure you stay out of the forests because there are monsters in there that do “scream” attacks that hit everyone and do big damage.

Alshark has to go through a cave to get to the monster castle, both of which have a bunch of traps in them that you have to pull switches to disable. The castle fortunately has a save point in it. There are also strange notes here and there from the “captured princess” warning you of traps and pointing you to where keys are. 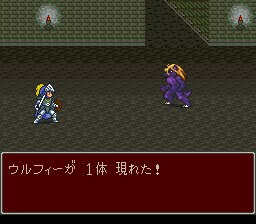 So far I haven’t found grinding to be an issue because the encounter rate is so high. Since it’s just Alshark there’s not much I can do except attack and heal.

It turns out that this “monster” was charmed by the elf princess Roryeen, who set up this whole scenario to find a strong fighter who could join her in figuring out what’s going on with all the increased monster activity. But the king is still happy and awards Alshark his knighthood, and a mission to go south to Kyubikku, which has been ravaged by kobolds. 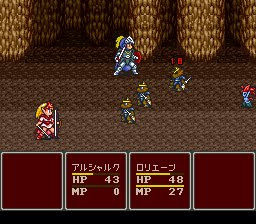 Roryeen has a bow so she can sit at the back and shoot the enemies. Sometimes she gets 2 or 3 shots but I haven’t figured out exactly when this happens. The encounter above is a fixed encounter — in addition to random encounters there are occasionally fixed encounters you can see walking around. Typically these are harder, as in the above case. That thing at the back uses the scream attack for big damage, and the kobolds can try to block your access to it. 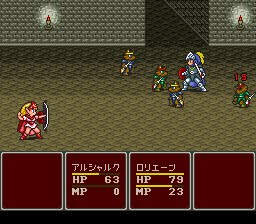 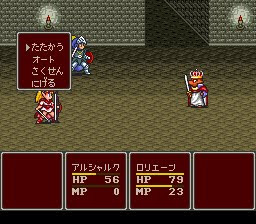 Eventually Alshark and Roryeen reach the kobold king and defeat him, upon which he wakes up from some sort of mind control and wonders what’s going on. Rather than solve that puzzle, our heroes move on to the next village, where a monster is demanding sacrificial victims from the people. Roryeen offers to be the next victim, hoping Alshark will save her, but this is where chapter 1 ends.

Chapter 2 moves to the elf kingdom, where Prince Ersais is wondering where Roryeen has gone, and he and Sarla go out to find her. After making their way out of the forest, they come to a mining town where an angry dragon is menacing the miners. The dragon is calling for her child, wondering what she did to humans to deserve this. So we go to a “monster maker” house nearby to find the small dragon locked in the basement along with other monsters. 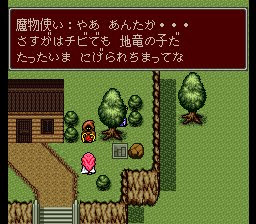 The monster maker was asked to keep these monsters by this pink haired mysterious woman below, but the monster maker sacrifices himself to let us escape and take the small dragon back to the mother, who then lets us pass. 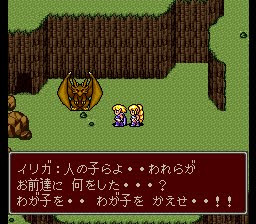 Now Ersais and Sarla are able to make it through the kobold cave to get to the same place as chapter 1, where Alshark is wondering how to save Roryeen. They manage to sneak in and confront the monster, and Roryeen who is annoyed that it took so long for us to get there. 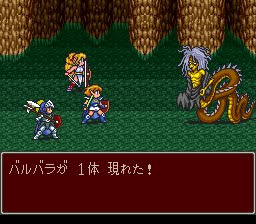 The key to this fight is to keep casting the spell that seals magic, otherwise Barbara will use hit-all magic spells that do a lot of damage. Once we save Roryeen, a pegasus takes us back to the castle to hear the stock JRPG cliches — darkness is coming on the world and we need to find the girl who is the chosen warrior of light, etc. Chapter 2 then ends and we shift locations again.

I think that this game is OK, but if I were not using the dungeon maps and emulator speedup it would be a lot more frustrating to play. There’s also a no encounters cheat code which might be helpful. But the graphics are decent and the interface is fine, with one quirk. I don’t understand how the shop interface works in showing you the stats of the weapons compared to your equipped ones. The important thing is that if no numbers are shown that means the weapon or armor is better than what you have equipped, but that doesn’t really make sense.