Once you get the ship and diving castle, most of the game is open to you. The next section is fairly non-linear; your main goal first is to get the remaining eight star pieces. One has to be fished with a fishing rod. Another is in a cave. One is simply sitting on the ocean floor. One is in hope city, you just have to give a man some food and you get it in return. With the three I already had this puts me at seven. The mirror shows that the last one is on the Demon Island which I can’t get to now. 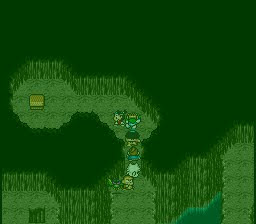 So the next step is to save Lord Enma, the boss of the first game. To save him we need to be able to dive the castle even farther into the ocean, which requires the services of a man named Gennai Hidari. He needs the Mermaid Tear. Unfortunately Karla has attacked the Mermaid Village and slaughtered the mermaids. 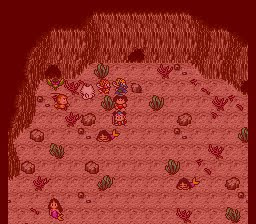 But a few survived, and after healing them, they were able to show me where they hid the tear. So now with that, plus the help of the Wind and Thunder God, Gennai is able to rejigger the castle so it can go even deeper, leading us to where Enma is trapped. 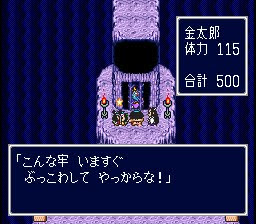 To save Enma we have to lose 500 total HP. Each person goes in turn and loses HP until they die (why not switch out at 1 HP?) and Enma is freed. Karla tries to cause a cave-in to trap us underneath the ground, but we escape with the help of Shuten Doji, and end up on an island where Princess Kaguya’s village is (we’re still trying to save her). Enma also joins us. He has two moves a turn, which is pretty useful.

At this point the best place to level is underwater with invincibility. Level 41 is enough to beat the game with a few more level ups from the remaining dungeons.

Kaguya’s grandfather gives Momotarou a mirror that will show the way to the Hero equipment that he lost at the beginning of the game. The sword is in the lake in the village, but it has lost all its power so it’s useless right now. The armor is in a cave on the sea floor. I could not figure out how to get the helmet for quite a while — it’s on a small island that moves through the ocean, but even when I went to the place the mirror showed it wasn’t there. Finally I found out from a walkthrough site that it won’t appear without first visiting this place I thought was optional, that you need 90 popularity to enter. 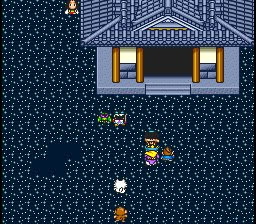 This gets you into the Star Road, based on the Tanabata legend. I’m not sure why this allows the island to appear, but afterwards we get the Hero Helmet.

The Boots are in a tower where we also have to face Rashomon demon. But the tower itself is pretty good for levelling. 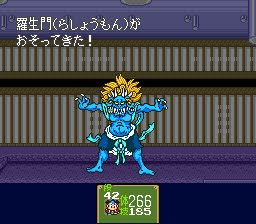 Apparently even if you win you continue on. Now Momotarou finds another warp to the moon, and we make our way back to the moon palace where the game started. The boss awaiting Momotarou is Daida, who stole our stuff at the beginning. 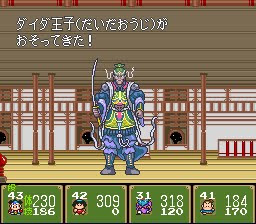 He’s surprisingly easy given how often he beats you up throughout the game. Anyway after the fight he decides to join Momotarou but Karla just kills him instead, and of course goes whining back to Basara saying that Momotaro stabbed him in the back.

Now that Momotaro has the 8 moon pieces we can revive the Phoenix. 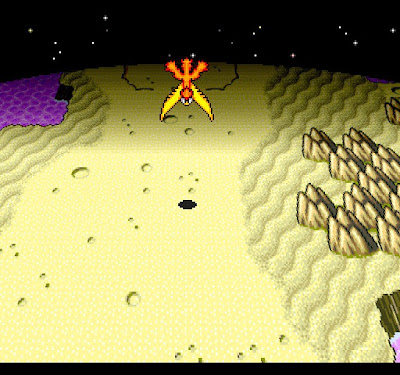 The Phoenix is able to carry Momotaro across the Styx River to Hell, where Karla awaits. He tricks Momotaro by promising to save Kaguya’s life if he (or Ajase) tells him the truth about Kaguya. It turns out that Ajase is part Moon part Demon. I’m not sure why this is so important to Karla, but he afterwards goes back on his promise and kills Kaguya. 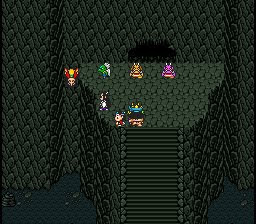 We take her back to her village where the grandparents look after her along with Ajase, while we go deal with Karla. The final dungeon is fairly long and in several parts. The most annoying is the first one. 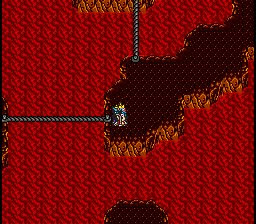 If you take the wrong rope it breaks and you have to go back to the beginning across the lava and begin again. Next up are a cold hell, a burning hell, and several other floors. Along the way I found Enma’s strongest equipment. Finally we reach Basara’s area and fight Karla himself. 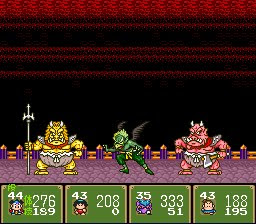 He goes down easily, and next up is Basara. 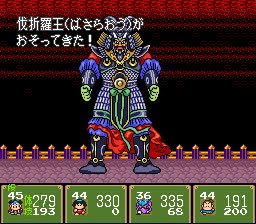 Basara’s all attack makes it tough, but with steady healing and use of MP restoring Luck Mallets (which you can get from the sage mountain and chests), he’s not too bad. Basara is ready to form an alliance with humans, but Karla reappears — it was just an apparition that we killed. He goes to kill Basara but Ajase throws himself in front of Karla. Karla then takes Ajase’s blood which turns him into a huge monster. He then poisons the seas and sinks most of the continents of the world. Fortunately at this point we get a chance to save and rest before taking on Karla, the final boss. 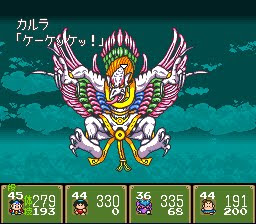 He’s pretty tough mostly because he’s unfair — one of his moves attacks 4 times. If 3 or 4 of those attacks go to Momotaro, it’s game over unless you have one of the auto-revive items. I lost the first time. After that I gave Momotaro two of the auto-revives and just kept using all my MP restore items on him so he could use his Rokkaku attack. As Karla loses HP he turns to stone, and eventually turns completely to stone. 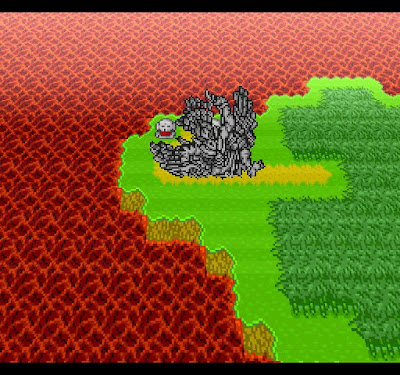 Now Kaguya, who is back alive, gives Momotarou the Moon Bell, which he throws into the sea. This cleanses the ocean and apparently the continents will come back — but isn’t everyone on them dead? The game just ends at this point but it seems like 90% of humanity got wiped out at the end of the game and they don’t really deal with that at all. 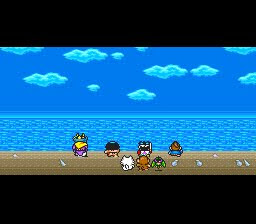 I guess as long as our party and the three animals survived it’s OK.