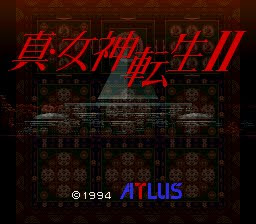 This is the sixth game in Atlus’ Megami Tensei franchise (including the two Last Bible game boy games and the SRPG Majin Tensei). I have played the first two MT games in the SFC remake (Kyuuyaku Megami Tensei), and I played the GBA remake of SMT1. So I’m not going to be able to say much about how SMT2 improved on the previous games in terms of interface, although from what I understand there were a large number of improvements over SMT1.

My overall experience with all four of these games seems to be the same — I want to like them more than I do. I love the concept, and as a kid I was really into the “blobber” first person computer RPGs like Wizardry, Might and Magic, and Bard’s Tale. The demon recruiting and fusing system has a lot of potential and has a surprising amount of depth for a game of this age, especially when you consider that it first appeared in 1987.

This game is in the tradition of Wizardry, which was very popular in Japan (and remains so). But I think due to the influence of the original Wizardry games, there are two aspects that reduce my own enjoyment of the games. The first is that a lot of the dungeon maps are large but have very little in them. An 8×8 map should have more of interest than a few treasure chests — I think that at one time it was sufficiently fun just to map out the whole area, even if there was nothing in it, but I feel like by 1994 that should no longer be enough.

The second is that the game is quite challenging. Even though they reduced the difficulty level from SMT1 (apparently), you still have uneven encounter difficulty in a region. Some enemy groups can be mowed down hardly taking a scratch, and other encounters will give you a game over before you can even kill one of them. Save points are few and far between, and a game over sends you back to your last save. I will admit up front that I am using save states — I’ve changed my position on save states since I started this blog, primarily because life is too short to keep repeating the same things over and over again. Basically my save state use is related to how fun the game is for me. For SMT2, so far I have been making save states after significant things happen — reach a new area, beat a boss, etc. So I’m not just constantly saving state every 5 minutes.

The demon recruiting is fun, but I do wish that it felt less random.

With all that out of the way, let’s get to the first part of the game.

The game follows off of SMT1 but the connection is somewhat loose. In SMT1 there was a nuclear holocaust followed by a flood that left most of humanity dead and the world ruined. Feuding religions, the Gaians and the Messians, were sort of united by the protagonist at the end of SMT1 (if you take the Neutral path). But now the Messians have taken over the government and converted the Cathedral (from the first game) into Center, where they work to create a paradise for all. The Gaians leave in protest. 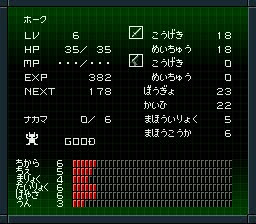 The main character, “Hawk”, has no memory, but is living in Valhalla, a place away from the Center that does not seem to enjoy high living standards. He fights in the coliseum, and at the beginning of the game is set to take on the current champion. The beginning has you training in a virtual reality simulator. 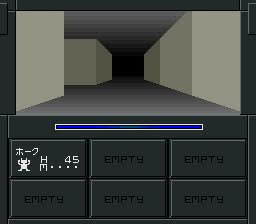 After moving up a few levels, Hawk eventually comes across a man in a wheelchair named Stephen who gives him an arm computer that lets him recruit and summon demons, and also use Transfer stations to save the game and warp to different places. Also he keeps having visions of various people (who you can name). The default names of the characters are Hebrew letters (Aleph, Beth, Ghimel, Daleth). Eventually it’s time to take on the champ. 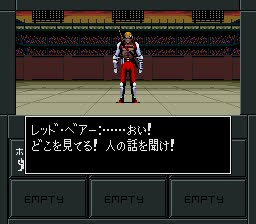 There’s a little dungeon before you fight him that has a lot of good equipment; the first time I died because I found the champion fight too early. But now that I knew where it was I could clear out the whole area and then go beat Red Bear. 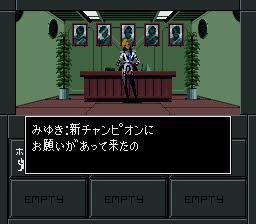 Now that Hawk is the champion, he gets access to better training sites, and can buy things from the stores. We’re also scouted by a woman named Miyuki, who wants us to meet with the very rich Madam. I also started recruiting monsters, but they were too weak to be viable in combat (revive costs are very high). One advantage of recruiting a monster is then generally if you talk to that type of monster, they will at least leave you alone and sometimes give you gifts (although if the monster in your party is dead they get pissed off and attack!) 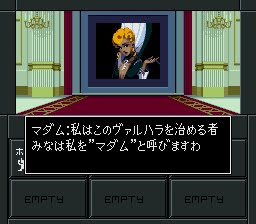 Madam wants me to go to the Valhalla slums and find the scientist Hanada, who is doing very dangerous experiments with the demon world that should be stopped. 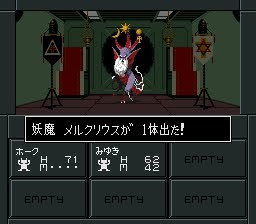 Hanada has indeed done a dangerous thing; the demon he summons kills him, and it’s up to us to fight. Madam lent us her Cerberus but he costs so much money and magic to use that I just fought with Miyuki and Hawk; generally the bosses are not that hard.

After this is the first big plot twist — Hawk is actually Kurisu, who the Center Messians believe is the Messiah. It’s not clear why he ended up amnesiac in Valhalla, but we head back to Center now where Kurisu begins to do missions for the Messians, along with a new girl Ise. 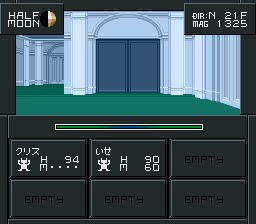 Center is a large area with a central building, and then four areas around it (Holytown, Factory, Valhalla, and Arcadia). The first job is to go to Holytown and kill King Frost and the Basilisk, who are causing all kinds of trouble. 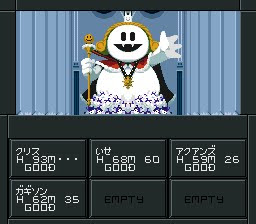 This area was not too bad. I continued to try recruiting monsters, but I still couldn’t find any that were actually worth using in battle. Even using the jakyou to combine monsters didn’t result in anything. They die so quickly and the revive cost is so high that it’s just not worth using a low HP demon that only does a few damage per attack, even if they have potentially useful spells. In the boss fights I did find some use in the demons that have the low-level heal spells, but not much.

Next up is the Factory, where Betelgeuse is messing things up. I found this area much harder than the previous one. The dungeon you have to go through is long, has difficult enemies, and no save points. I eventually had to more or less run from every fight until I could reach the boss, who himself was not that bad. This is where I started encountering the enemy parties that could wipe out my entire party before I could even kill one of them.

After I beat Betelgeuse I went back to Center but they didn’t recognize I had solved the problem. I went all the way back to where Betelgeuse was to make sure I had beaten him, then back to Center again, same problem. The GameFAQs walkthrough was no help. At this point I was starting to thing I had hit some sort of bug (SMT2 was notoriously buggy, including some game-stopping bugs). But finally checking a Japanese walkthrough site I realized there was a minor quest you have to do here as well — you have to go into this small area surrounded with a fence, where you’ll meet a woman who tells you that the Demonoids, an artificial life form, are rampaging. After a very easy fight against one Demonoid, the rest of them calm down and now the quest is complete. 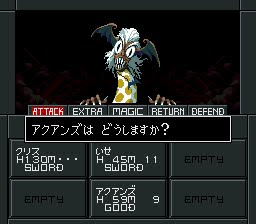 The next destination is Arcadia, which doesn’t have any problem, it just introduces you to the prototype land for the upcoming Millenial Kingdom. 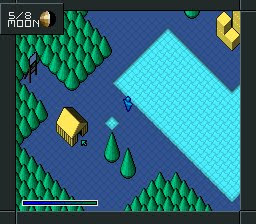 Returning from here, shit hits the fan as monsters invade Central and a False Messiah has arisen in Valhalla. 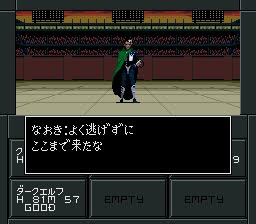 Naoki (Daleth) fights us, and once defeated, I had the option to kill him. Like SMT1, there are different paths in the game (Law, Neutral, Chaos). I’m not going to aim for any particular path. I chose to let him live, and he runs away. Kurisu is hailed by the priests and people as the true Messiah. 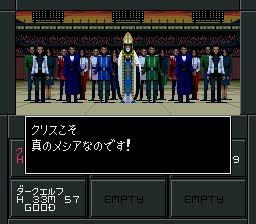 Now a man called Mekata wants to meet us to tell us the truth about Kurisu’s origin as well as the Millenium itself, but first we need to go save Miyuki who has been imprisoned for breaking the laws of Center. 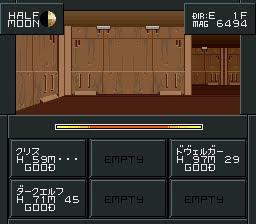 I had a really hard time with this dungeon as well. Although I did finally get some useful monsters (Drugar and Dark Elf), there were one or two encounters that I could not flee from and I could not even kill a single enemy before getting a game over. When I eventually summoned a fourth demon I was able to run away more easily; I’m not sure what affects that.

Once I saved Miyuki, I headed back to Mekata but it turns out that the Demon King Abaddon has absorbed Valhalla into its world and so I can no longer access it — what’s worse, this may be the doing of Central itself. On the plus side, Cerberus has escaped and now joins the party (with a revive spell!!!)  Central is now inaccessible, and Hiroshi (who was formerly with Center) is preaching to the people about how Central is creating a future paradise just for their selected elite, while sacrificing the rest of humanity.

This is a doubly annoying section because after doing the fairly long dungeon to save Miyuki, and walking back out, all the save points are closed off. You have to go back to Holytown to be able to heal and save — that’s a lot of game to do without being able to save. Anyway, there’s no clear direction for what to do next, but in Holytown there’s an elevator down to the “Underworld” (i.e. Japan), and we find ourselves in Tokyo, near Shinjuku.

That’s a good stopping place for this entry. I wish I had a better idea of how to get demons that could actually help in a fight.