At the end of the last entry I wondered about finding more useful demons — I really never did this. I used a few demons that provided useful spells, but other than that I played most of the game just with the main character and Miyuki.

The “underworld” (Tokyo) area has Asakasa, Shinjuku, Roppongi, and six mysterious shrines. I had been collecting a few “pillars” named for the various planets, and they went in these shrines. But the big quest here is to revive Masakado, which involves finding his various body parts. This is one of the more annoying fetch quests in the game because it requires a lot of backtracking, and revisiting areas. 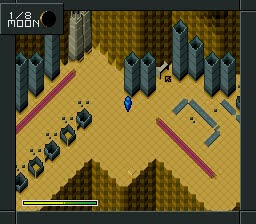 I was very fortunate to get a rare drop from a monster — a multi-hit sword that was three times as powerful as the one I had. This was my weapon for the rest of the game, and it made things considerably easier. I’m not a big fan of the system where hand-to-hand weapons cannot be bought in stores, only found from monster drops. 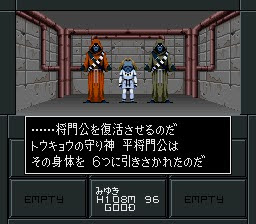 Eventually I reunited all of Masakado’s body parts, and his soul, so he revives to guard Tokyo. There’s no clear plot reason for this, it just opens up an event way back at Central. One of the biggest problems with this game is the huge amount of backtracking you have to do, coupled with a severe lack of Terminals (that allow warping between them). The Central terminal stops allowing transportation at this point until the end of the game, which is quite annoying given how many times you have to go back to Central. 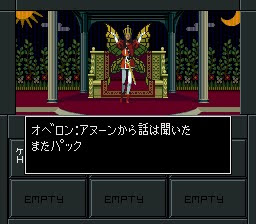 Hiroshi is preaching to the people at Holytown about how evil the leaders of Central are. He suggests that I go free the people working at the Factory. When we get there, they don’t seem to want to be released, which is bizarre — Hiroshi suggests going to the watchtower at the top of the area. For some reason this requires 10 intelligence to enter. What if you don’t have 10? I guess you grind levels. (You also need 10 magic on your main character to win the game for later). 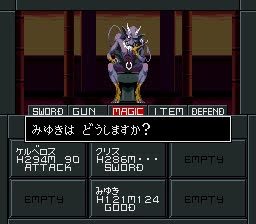 There’s the boss, who is sitting on a toilet for some reason (it’s not just a throne that looks like a toilet; when you beat him and come back it’s an actual flush toilet). Belphegor isn’t too difficult with my powerful sword. But beating him doesn’t solve the problem because there’s a Siren singing to bewitch the people.

That’s it for the Tokyo area, so now we have to head to the final area, the Abyss. There are two ways to get in — hopefully the player remembers the guy from very early in the game who was trying to get into the abyss but failed. He was using 4 dolls which we have. One of the dolls is wrong and has to be substituted for another one. This is another part where I don’t know how you figure it out on your own. I may be too quick to consult walkthroughs in these situations. Anyway, with the right doll we can get into a small part of the underworld. None of the shops are open or people around, except for one dude that is crying about being parted from Siren. 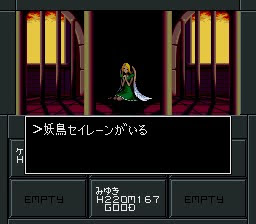 Of course we take him all the way back to Siren (another huge backtrack) who then stops singing, freeing up the miners. If you remember the guy who was digging at the bottom of the factory, he’ll now give us the Jupiter Pillar.

Next up is to free Center from its overlords; apparently the Millenium area was originally intended to be a paradise for people but now it has been taken over by: 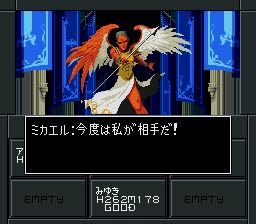 Archangels and YHVH. Megami Tensei players have already defeated YHVH in the original Megami Tensei II, but he reappears here. These bosses are rather difficult and you have to fight three in a row. I followed the walkthrough’s advice and got Anubis who has Divine Retribution, which takes off 1/8 of enemy HP. I think I could have beaten the game without this, especially since he can only cast it once with his MP.

There’s also a questionnaire that forms a significant part of deciding which route you’ll be on; I ended up with the Law route.

Once they’re taken down, a tail appears in Holytown, and it seems that the dragon Set is reviving. So it’s time to go back down into the Abyss to take care of that. Getting there is another hassle — you need the six pillars. This requires a lot of visiting old areas; maybe the fortune teller can help you with where to go, but otherwise you just have to go around randomly. One of them requires you to win the disco contest in the full moon (10 magic required on your MC, which probably no one has been buffing at this point). 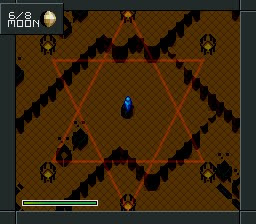 When that’s finally done, I gained access to the Abyss. The task here is really just to make it through a series of dungeons (getting keys and such) until you reach the final area. There, Lucifer’s messenger makes an appearance and takes us to Lucifer’s castle. Since I was firmly on the Law route I had to reject Lucifer and go with Hiroshi’s Eden project instead. He’s already gathered a large number of people from various places on the surface to Eden, and wants me to stop Set. First, we have to free Valhalla from Abbadon, who had sucked it into darkness earlier. 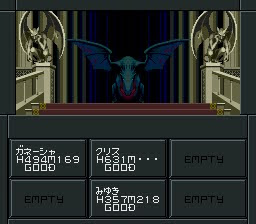 Abaddon is annoying because he uses so many buff and debuff spells that if you don’t have buffs yourself, or Dekaja to cancel the debuffs, it will take years to beat him. I had to try again and fuse a demon with Dekaja. After this I worked towards getting demons with Tarukaja (the strength up one). 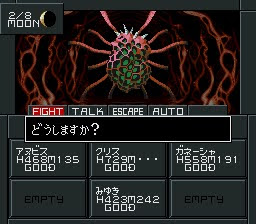 Once this is done, we have to make it to Lucifer’s castle. Along the way, there’s a neat sidequest with the souls of many of the dead characters from SMT2 and SMT1. 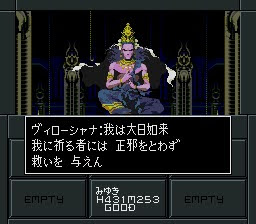 It seems like beating this god of the dead would mess things up, but apparently not. Next there’s a dungeon with 13 bosses; the first 12 are pushovers and the last one wasn’t too bad with my Tarukaja buffing. I also got a Parvati, which has great cheap healing as well as the buff.

Also around this point I happened on a comment that pointed out how important Speed is in boosting your hit chances later in the game, so I started throwing MC’s points into that.

The tower of Chokmah is the last barrier between us and Lucifer’s castle, and we get the famous Mara demon as a boss: 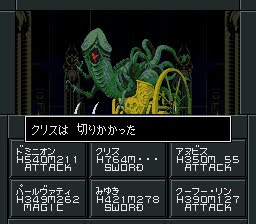 We reach Lucifer’s castle now, and it’s shut tight. What do I have to do on the Law path? Walk all the way back to fucking Eden. There are terminals in the Center and in a nearby dungeon but neither function for transporting! Why!? Fortunately the female main has Estoma which cancels random encounters, and there are nice maps to use. But as far as I can see there’s no clue this is what you’re supposed to do.

Back at Eden, Hiroshi fuses with Set and turns out to be Satan, a very useful demon for the final section because he actually does decent damage. 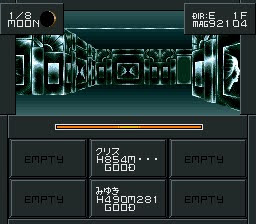 Lucifer’s castle is very large and full of tricks and traps, but no treasure. I used a map. 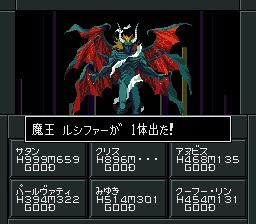 Lucifer was not too bad with the buff spells and Divine Judgment; he apparently has some nasty Charm attacks but he never used them.

Once Lucifer is beaten, we head back to Eden. in the other paths you have to do quite a bit here but in the Law path you immediately get taken to the endgame. 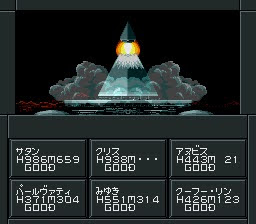 The Ark takes off into space and destroys all humanity except the chosen people on Eden — this is a common trope of villains in RPGs but I’ve never seen one where it actually happens (and apparently by the “heroes”?)

So now Satan has judged humanity, but there remains one being left to judge: 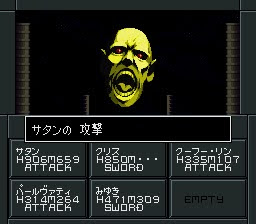 YHVH again! I used the same basic strategy — two Divine Judgments, Tarukaja buffs, and a defense buff to prevent some of his nastier attacks. God Voice is still a big threat but he didn’t use it much until the fight was almost over. 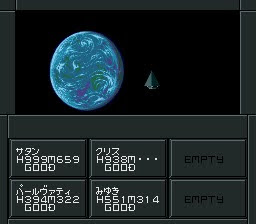 The Ark returns to Earth, and there’s really not much of an ending scene beyond that.

I reaffirm what I said in the first post — I want to like these games more than I do. I did see that a number of SMT fans think this game is worse than the first one. A lot of them complain about the main three problems I had — the huge amount of annoying backtracking, the difficulty in finding out what to do next, and the relative uselessness of demons. I hardly used the demons in the game; I mostly kept them in the computer except when I needed the buffs or Divine Judgment in boss fights. Satan was the only one who actually served a useful role in battle beyond those.

The story is pretty interesting for a game of this period, and the three possible routes allow for some replayability. I’ll have to look up what happens on the other routes.

SMT will be back one more time on this blog, for “If…” which comes out later in 1994. Next up is a huge tone change as we go from this post-apocalyptic RPG where you fight God, to a kids’ RPG starring Sanrio characters.