This is a long stage with a lot of annoying backtracking. A lot of the enemies are mages with long range Blizzard attacks, and there are a fair amount of bowmen and pegasus knights as well. First we head up NE all the way to the castle at the top. 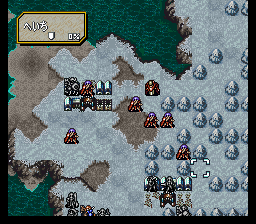 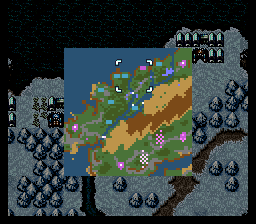 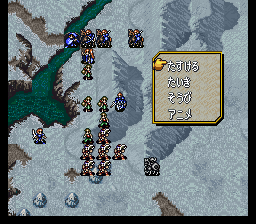 After that one is conquered, the bottom part opens up, but a troop of pegasus knights also heads towards the castle at the top. So I kept about half my force there (including the bowmen) and sent everyone else down. Unfortunately I didn’t realize that a fair number of units cannot cross the mountains and so can’t make it to the next castle without first conquering it and then using the Warp Staff. Also, you really want Levin down there so he can visit the castle for the Folsety magic. I also had to deal with Pamela heading back for a second round of pegasi. 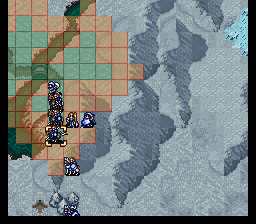 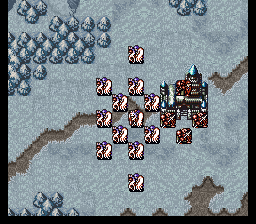 In the end it took a lot of resets but I managed to conquer and hold the bottom castle against the reinforcements, losing only Arden in the process. I revived him with the one use of the Valkyrie staff (30k repair!). At this point the rest of the stage is not difficult.

This is the last stage of the first generation. As far as I can see the instruction manual says nothing about the generations, but it is on the back of the box, so I don’t think it would have been a surprise. But it is a sudden development that this stage ends when you still have 2 castles left, so I think that would have been a shock to people playing for the first time. 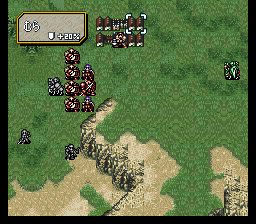 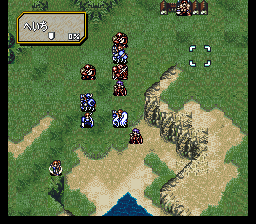 The first challenge is reaching Sigurd’s father so that Sigurd can get Tyrfing. You need to move up their fast so the enemies will not go for his dad, but you have to sent some units W as well. I had to restart at least once but finally I was able to open a path up.

Next it’s through the desert, which is annoying because everyone moves so slowly. I don’t know why SRPGs always think they have to have slow movement areas in every game. There are mages hiding out on bluffs, but the pegasus knight can take them on effectively. There’s also a large force of dragon knights; I hung back until they killed Cuan and Ethlyn and then came up to where I was, using my bows to take them down. Then it was a laborious walk through the desert to the next area, with the final boss of the generation. 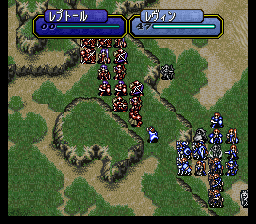 Folsety took him down in one turn, and the rest of his troops evaporate. 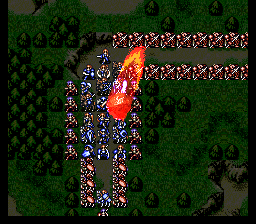 Then boom, generation one is done. Overall this stage is fairly short because of the reduced length, and not too difficult since a lot of people have legendary weapons at this point. I managed to fix Tyrfing up to 25 uses or so and repair the other legendary weapons to full before the end of the stage.

Now we have 6 more chapters — I’m already on chapter 7 but I will save that for two more posts covering three stages each. This is a long game!