As I thought, Fire Emblem 4 is very long, so I’ll need at least this week and possibly next week with side posts.

For this post I want to look at a few games from very early in the JRPG tradition — on the sites I’ve been using to compile my game lists, they are the first three listed. Obviously these sites have a very broad (and inconsistent) definition of an RPG, and I often have to cut games that are on their lists. But I think especially in the very early days of the genre, the core RPG ideas had yet to be established. In particular, there were a lot of different ways that designers tried to mix action and RPG elements.

I don’t think you can really do a true history of JRPGs without covering early computer games, and also looking at the early Japanese reception of Western RPGs (particularly the Wizardry series). I had always thought that Dragon Quest was likely inspired by Ultima III, but Ultima III came out in Japan only 6 months before DQ, so it seems more likely that it was a combination of Hydlide and Wizardry. Although the Japanese Wikipedia article does seem to indicate inspiration from Ultima, so perhaps I was right all along.

So this is not really going back to the roots of JRPGs, just the roots of what a console-only player would have had access to. (Panorama Toh, Black Onyx, and Mugen no Shinzo are games I have seen as particularly influential early RPGs or proto-RPGs, but none of those were released for consoles at the time.) 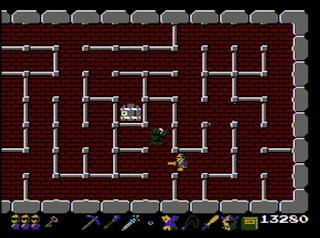 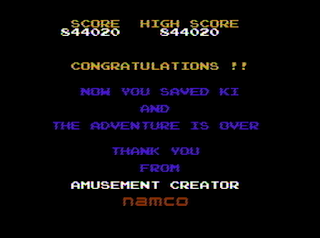 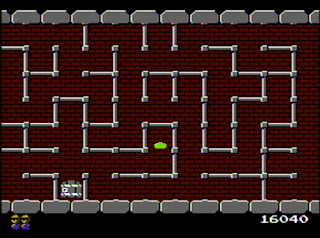 I don’t think anyone considers this game an RPG, but it unquestionably helped lay the groundwork for the JRPG genre. The arcade version came out in 1984; it was made on leftover Mappy circuit boards that Namco wanted to use up, and it became unexpectedly popular.

The gameplay is relatively simple. You are Gil, trying to rescue Kai from the evil Druaga. There are 60 levels. On each level you have to grab the key and then go to the exit door. You press and hold the attack button to draw your sword, and then you can attack enemies by running into them. You have to be careful; the slimes can only be killed if they are stationary when you move into them; if they’re moving into your square Gil will die. If you unsheath the sword, Gil can block projectiles and other things with his shield. There’s also a time limit, and if it runs out additional enemies come out.

But the real meat of the game is that every stage has a secret treasure box that appears when certain conditions are fulfilled. Some of these are easy to find — the first stage’s box appears when you defeat two slimes, which most players will do. Others are essentially impossible to get on your own. You have to get a fair number of these items to win the game. When this came out on Wii Virtual Console in 2009, US reviewers lambasted the game for this, correctly noting that the game is impossible to finish without help — there are no clues in the game that would show you how to get these items. Some of them are difficult to get even if you know what to do.

So why was this game so popular in 1984 when it came out? Here’s my guess. In 1984, the idea of “finishing” a video game (especially an arcade game) was still a pretty new concept, and most games could not be beaten. You just played for a high score. So players would not necessarily have been immediately bothered by the difficulty of completing the game. Furthermore, there was a community aspect to the game, where people might find some of the secrets on their own, or read them in a magazine, or see someone else at an arcade do them. People traded the secrets, and once you knew how to do them, it might be fun to go to an arcade and show everyone else that you’re able to finish it. There wasn’t anything else like it in the arcades at the time. But I would be curious to know more about what the designers were thinking when they created it — did they already have a plan to publish the secrets in magazines or the like?

The 1985 Famicom port is pretty much a faithful one (with worse graphics, of course). They added a second set of levels called “Another Druaga” that has different conditions for all of the items. I played through the first quest using an unlimited lives code and a walkthrough. I actually had fun with it. Even with the walkthrough it takes some skill to do everything you need to do to win. It only took me a couple of hours to win.

This youtube video is a good walkthrough of the arcade version that’s fun to watch. 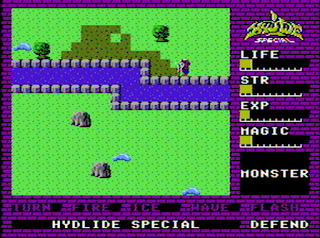 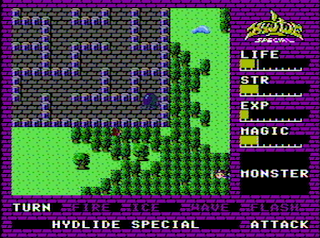 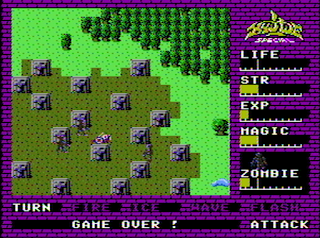 This technically came out a month after Zelda, but since the computer version predated (and likely inspired) Zelda, I’m flipping the order. This is probably the most criticized and misunderstood Famicom RPG, because it came out in 1989 in the US, well after Zelda and other games that did things better. But in Japan, the original computer version was a huge influence on JRPGs. It was the first game to have an open world system (as small as the world is). There’s no story development and no towns, but you can level up and get a few equipment upgrades.

The Famicom version is actually a remake with some elements of Hydlide 2 built in. It apparently was not well received even in Japan; the Famicom had a much younger player base than computers, and like Druaga there are no hints to help you figure out what to do.

You can put the main character Jim in attack or defense mode, which is reminiscent of the Druaga system and it wouldn’t surprise me if it was directly based off Druaga. But now you can explore the area, and level up by defeating monsters. The game as a whole is short and if you know what to do can be finished in less than 2 hours. But if you play blind it can be quite difficult because as I said above there aren’t many hints to help you figure out what to do. The goal is to save three fairies and take on the final boss, but even just getting started is rough. You will die a lot, although thankfully there is a quicksave/load you can use (this is one thing AVGN got wrong in his great video on the game — the passwords are only necessary if you are turning off the game and coming back later.)

Hydlide to me is not as fun as Druaga, and I’m probably not the only one who feels this way because Druaga had several remakes and has been re-released many times on numerous consoles, whereas the whole Hydlide series has essentially vanished into the history books. It can be hard for an innovator in a genre to hold up against later imitators who improve on the basic concept. 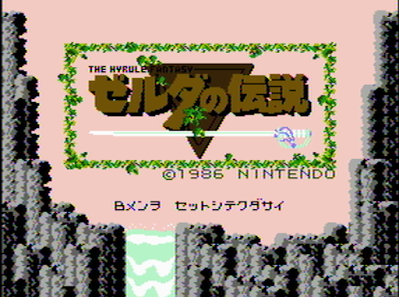 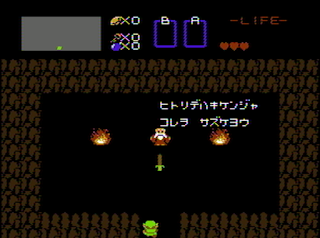 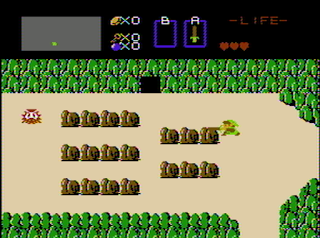 This game is very well known and I don’t think I have to say much about it. It was one of my favorite NES games as a kid and I can’t count the number of times I played through it. I think that most people do not consider this game an RPG, but when it came out I feel like Japanese players would have seen it as being basically the same kind of game as Dragon Slayer and Hydlide. There seems to be clear inspiration from Hydlide but I wonder if the item system was not inspired by Druaga. The sword and shield upgrades could be from that game, the bomb is sort of an implementation of the mattock, and both games have candles. It’s certainly a more flexible and robust system, but the origins may be the same.

In Japan, this game came out for the Famicom Disk System, an early peripheral for the Famicom that sought to overcome the limitations of the cartridge storage, and also provide a way to save games. This never came out in the US so when they released Zelda it was with a battery backup cart. The Disk System was a fairly short lived peripheral; there were piracy problems and issues with reliability of the disks, and eventually cartridges became much cheaper and could hold more space, and also had battery backups.

Of course unlike Druaga or Hydlide, Zelda went on to an entire franchise that is still releasing blockbuster hits today. I could never adapt to the 3D games and so my Zelda experience stopped with Link’s Awakening.

I had played all these games before this week so I’m just writing them up. In next week’s post I might go on and play a little bit of the next two games on these sites — Dragon Slayer for the Epoch Super Cassette Vision, and the original Dragon Quest. But we’ll see.

4 thoughts on “Tower of Druaga / Hydlide Special / Legend of Zelda”