Arliel: Crystal Legend (アーリエル クリスタル伝説)
Released 12/13/1991, published by Sega
I skipped this game on my first pass through, because it looked like it did not have a developing story. I think this basically a correct judgment although it might technically qualify. It’s notable as a very early SRPG example — it would have been game 5 if I had played it on my first pass. It was released in English as Crystal Warriors. As usual, the box design was replaced by Western-style art — the Japanese art was done by the same artist that did the Monster Maker series. I recognize the huge eyes. 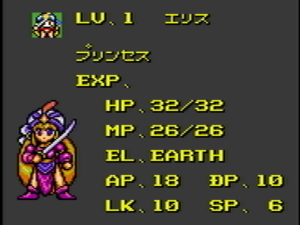 It’s the forerunner of Royal Stone, which I did play. You can see the connection between the two games; Royal Stone is better in almost every way, but for a handheld game in 1991 this one’s not terrible. I played about half the game, which was enough.

The story is that Queen Ellis of Arliel Kingdom has to fight against the magician Gram who wants four crystals. This is the whole story. There are no story sequences between fights; the only text comes from townspeople you can talk to between stages (who mostly just talk about what to expect in the next fight). The entire dialogue of the game is given in the GameFAQs walkthrough and barely fits one screen. 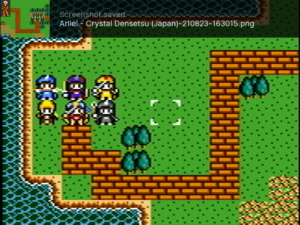 The battles have the same element triangle as Royal Stone: Wind->Water->Fire->Wind, with Earth neutral to all of them. Each character has an element. You start with a party of 6 and can hire more people at the Inn before certain stages. Between stages you can also buy equipment, items, and spells.

The classes are roughly the same as in Royal Stone; you have magic users, healers, and a few types of fighter.

The battles themselves are simple; they take place on small maps. Each map has some set enemies — as in Royal Stone they appear first as question marks until you use the Scan magic or fight with them once, then you can see what they are. In addition there will be some monsters on the map. 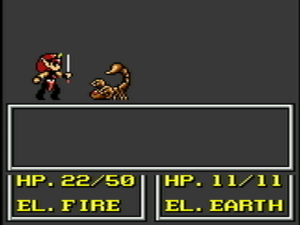 Fights work similar to Royal Stone. When there is an attack, each side gets 2 turns; they can defend, attack, use a spell, or retreat (which may fail).

In Royal Stone you could capture monsters, something I didn’t realize even after beating the game. Here the system is more integrated. Whenever anyone (other than a mage or healer) kills a monster, they will acquire that monster. In a fight, rather than using your turn you can send out a monster instead. This makes it easier to exploit the elemental weaknesses of the enemies and is a nice feature that I wish they had retained in Royal Stone. 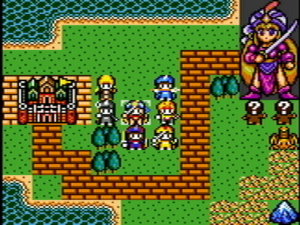 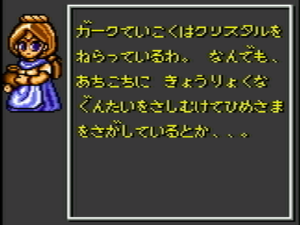 There is a limited equipment system (there seem to be only a few items each character can equip, and they only have one slot).

I played to about stage 6 and then got a game over because I moved Ellis poorly. I thought that was enough; this is not a particularly good game. Royal Stone improves upon it in almost every way and I would definitely recommend that over Crystal Warriors. But I can see that this was probably not a bad game at all for a handheld system in 1991.