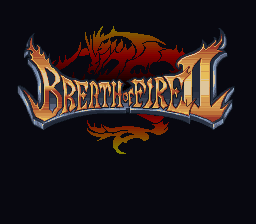 About a year and a half after the first Breath of Fire, Capcom released a sequel. The game has no immediate or obvious plot connection to the first game, but the game system is very similar and the “Ryu” and “Nina” names return.

The game starts off with a mysterious introduction, where Kurisu (Ryu, of course) is a child. His dad wants him to go find his sister Yua, who is talking to a giant dragon that supposedly protected them. After this scene, Yua is suddenly missing and no one recognizes Kurisu. He’s taken in by an orphanage but escapes with Bosh, a dog-human hybrid.They are confronted by a monster and beaten badly, and the monster recognizes Kurisu as the destined child (a more literal translation would be “child with a mission” but that doesn’t sound as good).

Then it’s 10 years later, and they’re working with the Rangers’ Guild elsewhere. 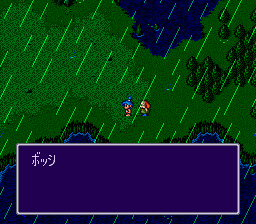 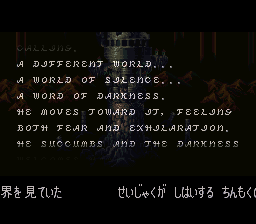 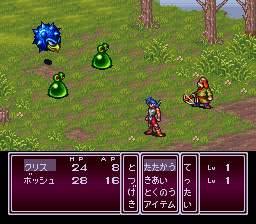 Bosh can hunt things when you see certain grass spaces on the world map. I was never able to kill anything so I just started ignoring them. There’s also fishing places but I haven’t used those either. The battle system is essentially the same as the first game, although this time you only get to see the HP of an enemy after you’ve won one combat with that enemy in it (so it doesn’t have the thing from the first game where bosses have extra HP at the end of their life bar).

This game has balance issues, and it’s really one of the things I’m having the biggest problem with. Monsters hit hard, the random encounter rate is high, and XP and gold rewards are low. Revive items are expensive, and enemies will frequently gang up on a character, killing them sometimes from full HP. The GBA remake doubled all the experience awards, which makes sense. I’ve gotten more game overs in this game that any other game I remember playing up to now for this blog.

The first mission Kurisu and Bosh get from the rangers’ guild is to find a pet pig who is lost. The owner, Mina, is one of the winged people like in the first game. 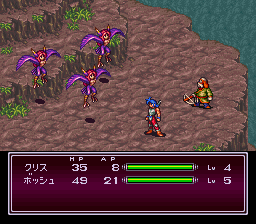 First we have to cross a mountain. There’s a revive pool which is useful, but the first boss battle is pretty tough. The key is that the left and right harpies are weaker and can be defeated more easily.

Now we reach a ruined hut where the owner is beset by nasty cockroaches. Japan has giant flying cockroaches (which can also be found in the southern US, called “palmetto bugs”). 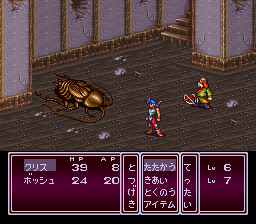 He is quite happy afterwards and offers a meal — it’s the pig! Fortunately we get to it before it gets cooked and return it to Mina. Later at night, someone visits Bosh with a mission. He wants to recover something that the town’s rich man stole; unfortunately someone else gets to it first and Bosh is accused of the theft. We manage to smuggle him out of the town, but the first major quest is to find the woman thief to clear Bosh’s name. Kurisu is on his own again, while Bosh stays back to help the man build the ruins of his house.

These ruins will become a town throughout the game; one of the new systems is that this town grows and you can invite people from around the world to live there, opening shops and such.

Kurisu heads to the next town, Colsea, where there’s a battle tournament. It seems like the thief might have entered the tournament, so Kurisu hopes to catch her by entering himself. But the only way to do that is by replacing the person that’s scheduled to fight her, so we have to go to the north woods. 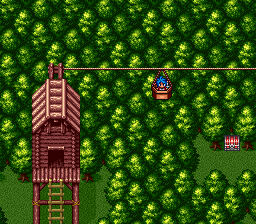 I don’t feel like the dungeon designs are quite as creative as they were in BoF 1, but here there are some zip lines to ride around. I had to die a lot to finish this, but when you die you reappear back at the last place you saved with some lost gold. You can store gold in the bank to prevent this.

Once Kurisu beats Babadel, the original fighter, he can take his place (and your name temporarily changes to Babadel). Now it’s time to fight the woman in the colosseum. Kurisu gets 1000 gold because this dude has set up a pro wrestling like situation where after the fight, the woman will get hit with poison darts. Kurisu takes some antidote to protect against it. 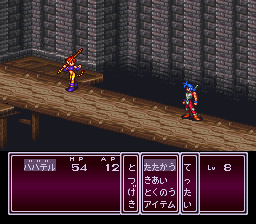 She’s tough (and not the thief, as it turns out). Once you beat her you have a split second to press up on the controller to block the darts from hitting her; I didn’t do this so she gets poisoned. This doesn’t have a big effect on the game, though, it just delays her joining your party a bit.
Now we decide to deal with the dude who set this up, and he changes into a monster! We’re joined by Rand, one of the other fighters. His in-battle ability can revive someone or heal their status effects, although it’s a low chance. I don’t believe he has a map ability. Afterwards, the thief whose name is Rinpu (Katt in the US version) joins. She can break some obstacles in dungeons with her staff. We all head back to the 共同体 (“community”, the name for our new town). Rand stays there and Rinpu joins us as we get further sidetracked in the first town. Mina’s older sister Nina is getting blackmailed by a Joker thief group, and they kidnap Mina, so time to save her.

Nina is a magic user. Her special ability is to recover MP (which works better if her MP are low). Of course when we reach the thieves’ hideout we find out that Joker has also been possessed by a monster (or perhaps killed and replaced? Or changed into?) 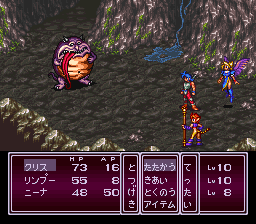 And once he’s taken down, we save Mina. Now Nina and Mina need to go back to their home, Windia, and we accompany them there. Unfortunately their mom only recognizes Mina as her daughter, seeming to not like Nina’s black wings. 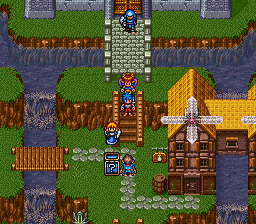 We then pick up the fourth members, Sten, a monkey. He is able to cross short gaps that have poles he can grab on to. The thief went west so we continue the chase. The next important town is Capetan, where some children are stuck in a well. 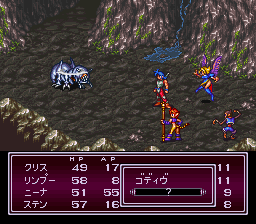 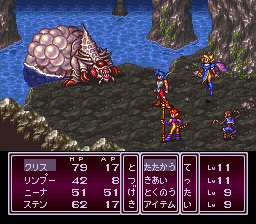 The well also has these nasty parasite things that grab onto people’s faces, and a monster at the end. This game really likes bug-based horror movie like monsters. This is a tough monster that has an area effect spell. I basically had to try several times until by luck he did not use that spell as much, and I also used all the damage inflicting items I had.

There are also some alternate formations you can do although I’m not sure how useful they are (Nina should definitely be in the back in that screenshot above).

Once you save the villagers, one heads back to your town ruins, which has now become the Community. Rand rejoins and we can now choose our party from among the 5 members (although Kurisu always has to be there, of course). We can also add a witch to the town who gives Kurisu some spells and also begins the “fusion” system where you can get shamans to fuse with your guys. They’ll add stats and powers, and if done on the right people in the right combinations, can change their sprite and result in additional effects. Unfortunately at low HP the fusions break — my guys are at low HP very frequently resulting in a lot of fusion breaks, and you have to go all the way back to the Community to be able to re-fuse. Then we continue back west to chase down the thief.

Next we meet a big frog named Tapeta (Jean in the English version) who tells us to find a witch to turn him back to normal. 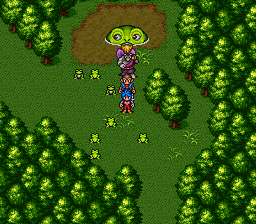 The witch tower has a lot of pits and tricks in it, and the witch Nimufu at the top. She seems rather upset that nobody likes her, and even when we beat her she’s still complaining that this frog is the only one who ever seemed to pay attention. But all we need is a maiden’s kiss to turn it back to normal.
“Normal” is still a frog, just not as big. But now he can join our party. Tapeta’s power is to turn into a big frog, which lets us cross some rivers and other places like that and also decreases the random encounter rate. Finally we can get the first of Kurisu’s dragon powers, behind a waterfall. In this game they use up all the MP of Kurisu for big damage.
At this point we can also get some new tenants for the buildings in the Community. I just recruited three shopkeepers, including one who has some nice flame equipment. It’s expensive, but I bought at least a flame sword for Kurisu. Near the waterfall is a restaurant where they try to eat us: 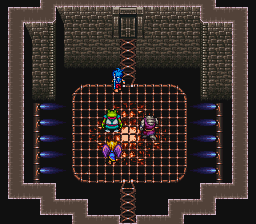 But they’re no match for the dragon power. I gave the power you get here to Nina, a 0 cost damage spell seemed good for her.

The last destination in our thief catching mission is Castle Swimmer, where we learn that Tapeta is actually the prince. But a fake prince has come in to take his place, and his sister Patepa wants us to help her prove the fakery. In order to do this, we have a cooking contest, but Tapeta needs good ingredients that we have to recover from beneath the castle. Of course being frogs, they want a bunch of bugs. Time for more yucky boss fights. 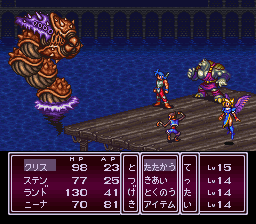 This dungeon was especially annoying because the Swimmer store has no poison healing items, and there are enemies in the dungeon with an area effect poison spell. I had to leave this dungeon (via game overs or walking out) more than any dungeon up to this point.

Eventually we get all the ingredients but the taste testers throw the competition to the fake prince. As you may guess, the fake prince is yet another transformed monster. 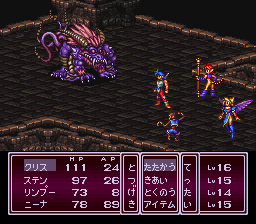 Once he’s beaten, Tapeta is finally recognized as the real prince, although he decides to keep adventuring with us. It also turns out that Patty, the real thief, was locked up in the dungeons, so we take her back to the first town.

Patty lets us know that Trout, the rich man she stole from, is actually a bad guy that’s stealing a bunch of stuff himself, which we already knew. And by this point it should not be a surprise that he is yet another monster, who Bosh and Kurisu go beat by themselves. 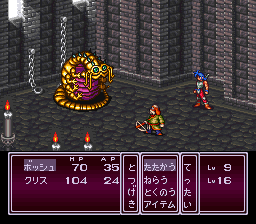 At this point the initial quest is complete, but Bosh and the rest of us decide that there are too many weird things going on — we need to investigate where all these monsters are coming from. And the Rangers’ guild sends us out to help solve this problem.