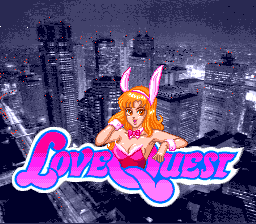 This is a stupid game — that is, a “bakage” to use the Japanese word. It falls into the same category as Maka Maka in that it relies heavily on humor based on parody, gag manga tropes, poop jokes, puns, and occasional racist humor. It was originally developed for the Famicom and apparently completed in 1994, but then the release was cancelled and it was ported to the Super Famicom.

The game begins with the weak-willed “mothercon” (Jocasta complex) main character at his wedding with his fiance Yuka. But then suddenly Yuka disappears, and the main character goes on a quest to find her. 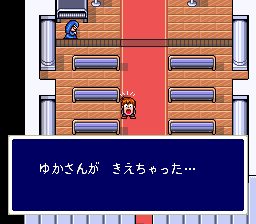 The game takes place entirely in various areas of Tokyo. There really is no coherent plot; it’s mostly just a string of parodies and jokes as I mentioned above, as the main character travels through various regions of Tokyo. I’ve never liked gag manga-style humor, and I didn’t really think most of the game was that amusing. Along the way you’re joined by two main helper women. The first is Haruka, who works as a cashier in a store. The second is Reiko, a “fleeter” (someone who does temporary jobs). 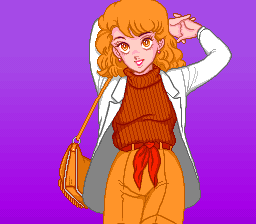 There are other women with these full size pictures as well, although they don’t join the party. 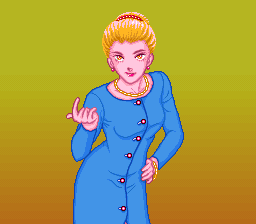 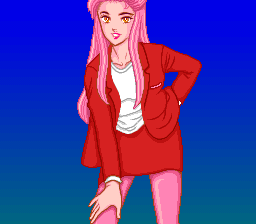 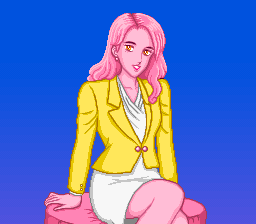 Some of the plot elements include defeating rogue cabs that have come to life, catching a panty thief, appearing on a TV station, and tricking a Crane Game machine into digging a tunnel.

In the end, you finally discover Yuka on a ship in Yokohama harbor. It turns out she ran away so that you could go out an earn experience and money, which makes you a more attractive husband. The main character is so upset by this that he rejects her and marries either Haruka or Reiko instead (depending on choices you made earlier). He throws away all his XP and gold, and the final scene is the new couple’s life where they have no money and he can’t get a job because he has no experience.

The game itself is a pretty normal RPG. It has a lot of usual bad features of old RPGs — slow walking with no dash button, no way to see the stats of equipment, no explanations of what the techniques (spells) do, etc. Rather than fighting monsters, you encounter women, and the “attack” command is replaced by “flirt” (kudoku, which can also just mean “persuade” — I don’t know if the game is using that as a kind of double meaning or whether the “persuade” meaning has become obsolete.) 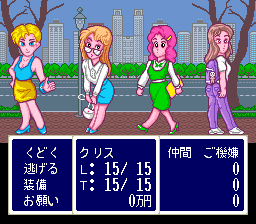 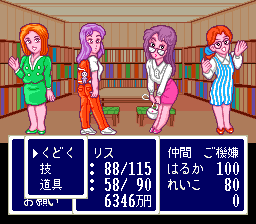 Once you get party members, they don’t participate in the battle, but you can ask them to heal you or to “protect” (I never fully understood what this did). The main character’s techniques are color coded based on their effect, but it still would have been nice to have some explanation of them. 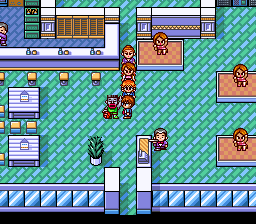 Some of the “foreigners” you meet are depicted in pretty stereotypical/racist manner, like the black person in the illustration above. Also at one point you visit the Indian embassy where they’re all walking around eating curry, and later they are contentedly eating a huge pile of poop, having mistaken it for curry.

On the whole, I’m not sure this game is really worth playing. Maybe if you really like Japanese-style humor it might work for you, and at least I can say that the setting is original and it’s not the same old “defeat the demon lord” sword and sorcery game. There are a lot of townspeople to talk to. The enemies are colorful and detailed, and the graphics on the whole are fairly good, especially when you consider that this was ported from a Famicom game.

After yet another frustrating week with Blogger (having a lot of difficulty uploading the pictures, which has been broken ever since they switched to the new layout), I have decided almost for certain that I am going to transition to a WordPress site, where I will most likely combine my two blogs into one (using the more flexible layout to make it easy for people to find the various posts). It may be a while before I actually do this, and I will continue to post links on the Blogger site for a good while after I switch, but in the end I think it will be better. And if I continue to do posts after I finish the SFC project, that will be even more convenient.

Also, I may not have a post next weekend due to the Thanksgiving holiday, but we’ll see.