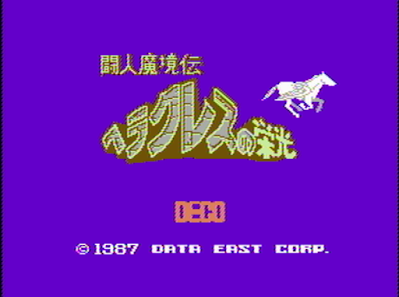 I’m still playing Sangokushi Eiketsuden for my other blog. As I said in the previous post, when I don’t have a post ready for this blog, I’m going to make a short post about some other retro RPG. I’ll play it for a short time (1-2 hours at most). This is not a new chronological project, just a way to make a quick post to fill a gap here.

This post is for Heracles no Eikou (The Glory of Heracles). The third game in this series was one of the early games I played here, and Glory of Heracles IV is a 1994 game that I will get to later. So I thought I would go back and see how the series started.

As far as I can tell, this game is the first RPG imitating the Dragon Quest style. Dragon Quest 1 and 2 had already come out by this point, but it took a while before other companies began to mimic their design. Rather than the generic fantasy world of Dragon Quest, Data East used ancient Greek mythology as the basis for their game.

As is typical for games of this era, the game itself gives no backstory — upon starting the game you’re immediately dropped in Athens. The instruction manual has the story. Hades has captured Venus, and Heracles has come from Olympia to save her. 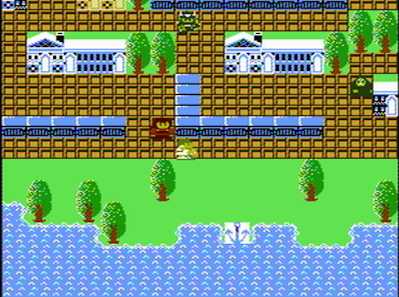 The graphics are pretty underwhelming even for this era — look at how Heracles gets lost in the brown color of the floor. The inside of the buildings is also strange: 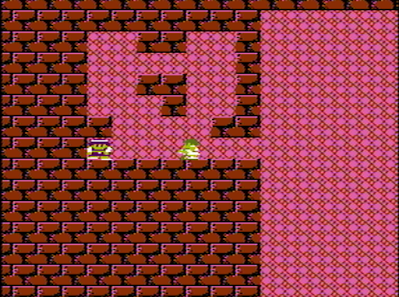 Dragon Quest did a much better job with their limited graphics.

It appears that the game involves defeating 12 bosses (reminiscent of the challenges of Hercules from mythology) and then defeating Hades. You cannot save your game; instead you have to visit a person in town to get a password. Many western players do not know that the first two Dragon Quest games in Japan used passwords instead of saves. In the early days of the Famicom, the battery backed memory had not yet been developed. The Famicom Disk System had come out in 1986, which allowed saving games as well as larger games than the cartridges of the time could hold. But Data East stuck with the cartridges.

The password system is strangely implemented. Using it allows you to preserve your levels, equipment, and items. But all the bosses you defeated return, and all the chests in dungeons can be taken again. This seems to mean that you do not actually need to defeat all 12 bosses to win the game. Some of them have items that you need to win, but others just give XP/gold or items that might be useful but not necessary to win. I understand that Data East wanted to keep the passwords shorter (the DQ2 passwords are 41 characters), but it creates a strange playing experience. If you die you return to Athens with half your money but everything else the same. So I suppose nowadays you could just use save states on an emulator instead of passwords, although it would change the way the game played.

I wandered around Athens, getting some clues to various places I could go — everyone agreed that I should go south first and gain levels. I bought some basic equipment and a few pieces of food to restore HP. 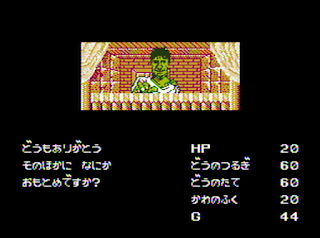 I bought a copper sword, copper shield, and leather clothes, which are shown on the right. Those numbers are not the strength, but the durability — as you fight and get hit, the durability goes down. You have to return to Athens and get Hephaestos to fix them before they get to 0 or they will break and disappear. You can also hire him for 5000 gold and then he’ll be permanently in your inventory and automatically fix things after each battle.

I’m not sure what the stats of equipment is or even if they have stats — apparently the weapons have different compatibility with different types of monsters (which is listed in the manual).

I left the city and headed south. Unlike Dragon Quest, the city and overworld are not on separate maps. I quickly encountered my first enemy. 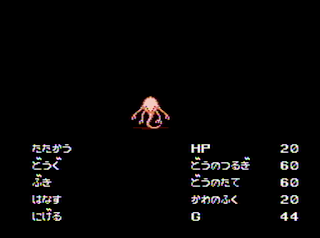 As in DQ1, each fight is one on one. Running is pretty effective; I’m not sure what talking does. The instruction manual warns you to be careful doing it but doesn’t say what it actually does.

I gained a level wandering around, but ran into an Iron Golem that blocked the way and was impossible to defeat. However, you can simply run from him and pass by, which leads to the second city, Pella. This is actually where I stopped playing — I intended to do a bit more than this, but this game is really bad. It’s slow moving, ugly, and the annoying blacksmith feature means you have to keep running back to Athens.

So this is not a good outing for Data East, and according to the Wikipedia page it was not received well in Japan — it was criticized for its poor game balance, lack of in-game guidance, and difficult puzzles with inadequate clues. There were also ways you could mess up your game, by selling key items or running into certain bugs that would stop you from being able to finish the game.

I should be able to do a Live a Live post next week, but next time I have a free week I’ll do Glory of Heracles II to see how they improved on the original.

3 thoughts on “Glory of Heracles”