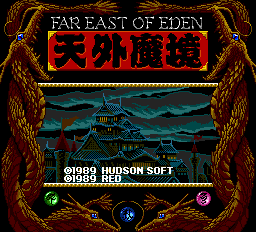 This is the first entry in what became a popular RPG series of the time. The English title “Far East of Eden” refers to a (made-up) series of fictional novels by P.H. Chada. The idea was that the lang of Jipangu that the game takes place in would be a stereotypical Japan as viewed by foreigners. However, it’s really more of a stereotypical Japanese view of medieval Japan.

The game was the first RPG released on a CD, I think for any platform, but definitely at least on console. Along with Ys I&II, it promoted the PC-Engine CD in the early days and helped its popularity. Some people complained about the load times but fortunately nowadays you’re most likely to play these games as an ISO file (even if you legally buy them from the Game Archives) so that’s not a problem.

I’m playing this game on the Mednafen emulator, which seems to offer the best and most accurate emulation of the PC Engine.

In 1989 when this came out, the first three Dragon Quests and the first two Final Fantasies were available, as well as Destiny of an Emperor, three Deep Dungeon games, Megami Tensei, and others that I’m not very familiar with. The first Tengai Makyo doesn’t do much that those games don’t do in terms of gameplay — it ticks a lot of the boxes on that list of “bad early RPG features” that I mentioned in the previous post.

What sets it apart is the CD technology, which allowed for a number of innovations. The font uses kanji and kana. There is a large amount of voiced dialogue, drawing on a number of well-known seiyuu of the time period. The graphics are somewhat better than the Famicom, though not at the level of the Super Famicom (or even at the level of later PC Engine games). Unfortunately the music is not played off the CD — this feature was used by a lot of games (including Ys I&II) because they had a lot of leftover space on the disc, so the music is recorded directly to CD tracks which can then be played from the game. This game just uses the internal PCE music chip.

I think that this is a decent 1980s RPG — I would compare it most closely with Dragon Quest II in terms of system and playability. It doesn’t really try any innovations on the level of the class system of DQ3 and FF1.

Our hero is Jiraya (or ZIRIA?) one of the three descendants of the Fire Clan, whose mission is to gather the other Fire Clan members and defeat Masakado, a demonic commander rebelling against Imperial rule (I guess).

Jiraiya is given the mission by his grandfather. You can see that they use inset graphics to enhance the dialogue scenes. These are done not only for major story people but also for some of the random villagers as well.

For the first part of the game you’re on your own, and at the very beginning you can’t do anything but attack, so this part of the game just requires being at a high enough level and having the best equipment. The enemy monsters are colorful and detailed: 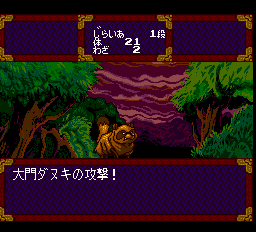 The first goal is to get past a cave, but Jiraiya gets tricked by tanuki. Once they’re beaten, though, Jiraiya is able to use a whisker to bother the large catfish in the cave, who breaks down a boulder blocking his way.

Moving on, there is an old man who will teach Jiraiya a skill (basically the chance for critical attacks) if he’s defeated. I needed a bunch of heal potions to deal with him. Then I found the first Kumogiri village. These are small villages dedicated to helping the Fire Clan, and there are identical ones all over the world. They have simple shops and inns, and you get a frog that can teleport you to any of the Kumogiri villages. Soon Jiraiya also gets the first spell, a healing spell. The spells are interesting in this game because you can switch them from character to character, so you can choose how to distribute the spells. This is one of the few innovations of this game compared to the classic NES-era RPG.

The next boss is a giant tanuki; once again since Jiraiya’s healing is very limited it’s just a matter of being at the right level and you win. The next town has the first of Masakado’s 13 generals, named Gomon. He has turned all the people into stone and tanuki have taken over the town, so you can’t use any of the stores until he’s defeated. This boss required the most levelling so far.

Fortunately the game has the DQ “die and lose half your gold” feature so you can try the bosses even if you don’t think you will win. There’s also an auto battle if you hit select that helps a lot (especially coupled with emulator speedup).

After this fight we enter a new area and finally get the second party member, Tsunade. She’s an axe-wielding young girl. 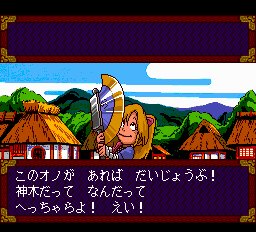 She has a battle command “pretend to cry”; I’m not entirely clear what it does but of course you can also give her spells. By this time I also had a fire damage spell, a sleep spell, and a lightining spell that hits all enemies. But because MP are so limited, one person is going to have to save MP for the heal spell against bosses.

One other interesting thing about the game is that you get XP not only for winning battles, but for accomplishing events like getting key items, new spells, characters, etc. That reduces the grinding time somewhat.

So that’s where I’ll leave this game. As I said, it’s not bad for 1989. If you’re a player who likes these really old console RPGs it’s definitely worth a try. I could probably finish this for completion’s sake and be OK about it, but I’d rather move on to something else.

Now what should my next game be? Metal Max 2 still hasn’t gotten here and it sounds like a game that I really want the instruction booklet to. The next games on the list are:

After that is Ogre Battle, which I think I am going to play despite it being questionable as an RPG (I’m not sure it fits my criteria for a strategy RPG) and it’s available in English.

So this week I will either start Ogre Battle or play the next PCE game (Cosmic Fantasy: Adventure Boy Yu). Any preference?