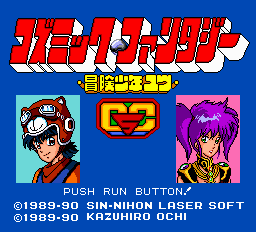 The PC Engine CD add-on had two early hits with Tengai Makyo in June of 1989 and then Ys I&II in December. The next RPG released for the system was Cosmic Fantasy, the first of four games in a series released between 1990 and 1994. The second game was localized by Working Designs.

This game provides an interesting contrast to Tengai Makyo. Both games are examples of the 80s early style of JRPGs, one that I associate most with the Famicom — although I’m finding that many early Super Famicom RPGs are in this category as well. Tengai Makyo is a good example of this type of game, and Cosmic Fantasy is not. Zenic Reverie has already covered Cosmic Fantasy 2, making the following comment:

It’s the games like this: bland, mediocre, unpolished filler that makes it difficult to feel motivated to play another hour.

This is also an accurate description of Cosmic Fantasy, and it makes me relieved that for these PC Engine games I’ve made the decision to stop after a week unless I’m actually enjoying the game.

The game opens with Yuu, a Cosmic Hunter, and his motorcycle-pet Monmo. Their spaceship crashlands on a planet, where the rest of the game takes place. Unlike GDLeen, this game seems to offer no explanation for why this planet is at sword-and-sorcery technology level but recognizes Yuu as a Cosmic Hunter and has no problem with his high tech stuff. Yuu has to explore the planet while his ship’s self-repair process completes, and this is how he gets drawn into saving the world.

Apparently the #1 complaint against this game at the time was the long load times, which could reach 20+ seconds in some cases. Of course this is not an issue playing from an ISO but even from the ISO the voices take several seconds to start. Like Tengai Makyo, this game has a lot of voiced dialogue and semi-animated cutscenes like the ones above.

The battle system is your basic early RPG, although you have an auto-battle option. Yuu has magic powers which are “psychic”, but can only use them at pre-determined points in the story where some event makes him upset at a specific boss, and they go away after you beat the boss. That’s why Yuu’s MP are listed as 0/5 in the picture above. This is a poor way to implement the system because it means that most of the time Yuu has no options except for attacking. And so that means that early in the game before you get your second character, you have to grind, a lot. I spent a lot more time grinding in this game than I did in Tengai Makyo. Part of the problem is that a game over returns you to your last save, so you keep nothing that you gained. But there also tends to be a huge difficulty leap in the monsters in reaching a new area, and running away rarely if ever works against stronger monsters. So even after Saya joins you still have to grind a lot, and always have to be refilling your MP-restoring items.

Zenic commented that Cosmic Fantasy 2 was far too easy. This certainly is not the case with CF1. Any random encounter can prove deadly because you can quickly get overwhelmed, especially when status effects come into play. Unless you do extensive grinding before entering each new area, you’re going to have a lot of frustrating game overs.

After a few areas you pick up the second character, Saya. This starts a Cosmic Fantasy tradition of the heroine always being introduced through a shower or bathing scene.

For some reason, the PC Engine became the primary console for games with content like this. The situation was the same as now where genuine eroge only came out for PCs, but the PC Engine had a much higher tolerance for nudity than most other consoles did at the time (and do now). Saya is from the planet and can use magic regularly, which helps out a lot. Also you can actually buy MP restoring items for a cheap cost, and money is almost worthless because of how much you get in the requisite grinding. The only time you can spend more money is when you encounter this cat merchant character, who seems to show up in all the games.

The cat sells things like bombs, guns, and force fields in the game but they’re not that useful. The guns are expensive and quickly run out of bullets, and the force fields depend too much on luck to be a reliable strategy.

As far as I got, there wasn’t a whole lot of story. The goal is to defeat Morgan, who is the tyrant of the world, although I can tell from the koryaku site that there is a further dungeon and boss after you defeat Morgan. You journey from place to place, taking care of whatever problem is happening in the town. Eventually I began to face the Four Generals of Morgan, and by the time I stopped playing I had beaten two of them. The bosses tend to be very easy because you have to grind so much just to survive the dungeons to reach them that by the time you actually get there, they go down easily.

There are some minor story touches, like returning a necklace from the ghost of a defeated warrior to his girlfriend. She gives you an ocarina which Saya then plays to pacify the ghost.

Overall this is not an unplayable game, but I think it’s too dated, slow-moving, and grindy to appeal much to players now. As I said, Tengai Makyo is a much better example of this style of RPG. CF’s world is not as interesting as TM’s, and despite the designs being done by a manga artist, the enemies are bland and unmemorable, compared to the colorful, distinctive enemies of TM. CF does seem to have more cutscenes than TM, however.

As of this post I still have not gotten my package with Metal Max 2; it’s supposed to arrive by Dec 21 but I’ll be gone on holiday then so if I don’t get it in the next couple of days I’ll have to continue the PC Engine games through the new year. If that’s the case, next up is Death Bringer, a port of a PC-88/98 first-person dungeon game. In the future I’ll buy the SFC games several games in advance so I don’t get this problem again.