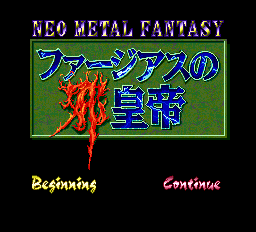 Continuing with the PC Engine blitz, this game is based on some sort of interactive game that ran in a Japanese magazine in 1991 and 1992 — I’m not sure exactly how it worked, but it involved sending your moves and/or solutions to the magazine and then in the next installment of the game they would continue the game and show how people were doing, and what your ranking was. They next released a PC Engine game. 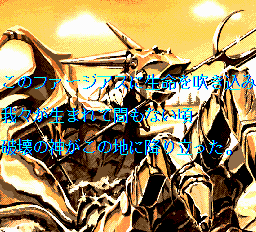 The opening story is pretty cliche — there were gods who created the world, and evil gods of destruction who tried to ruin everything. A hero created by the gods went up against the destruction god and eventually sealed his power, but died, promising that he would awaken once again if the god of destruction returned. Now the world has been mostly taken over by the Jakotei (evil Emperor). The main character is Atima, played by the late Honda Chieko. 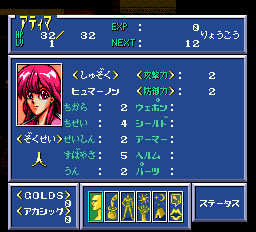 Atima has turned 16, so she has to undergo the trial to see if she can awaken the hero from his slumber. Here’s the big twist of the game: she succeeds in awakening him! 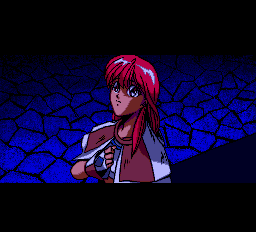 However, he’s just a little kid that doesn’t remember anything about who he is. Honestly at this point I’m not sure what is already old cliche and what only seems like cliche 26 years later. Anyway, the Jakotei quickly gets wind of all of this and kidnaps Atima and her parents, though he doesn’t recognize who Dimeora (the hero) is, and just kicks him out of the floating castle. 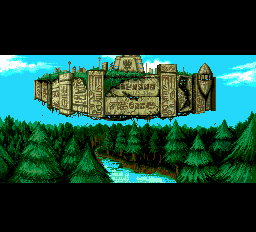 The battle system is basic AMID, but the magic is done a little differently. Rather than MP, you collect “Akashic” from beating enemies and finding them in chests. The max is 9999. That pool is shared among all your party members and it’s what you use to cast spells. The cheapest spells are only 100 akashic, but the most expensive ones are close to 3000. To learn spells you visit a “guild” in town who will give you any spell they have that Atima or Dimeora can use; there is a limit to how many spells each can hold, but you can also get rid of spells at a guild as well.

After Atima’s capture, Dimeora sets out on his own, but is soon joined by Princess Satera and two mercenaries she hired (Sid and Katoon). We reach an Aleph Base (Aleph is against the evil Emperor). In bars you can tune into the news and hear what’s happening with the war. Another interesting feature is party conversations, which are much like the skits in later Tales Of games. Your party talks about where to go next, what they feel about the current situation, etc. This and the news broadcasts are where most of the voicing is in the game.

Eventually we make it through to Lalogs, which is nearby the floating fortress. After freeing Lalogs town from an attack, we receive a card key that will let us into the floating fortress — pretty early in the game to go after what seems like the final dungeon, but I assume we’ll be back. Because this time all Dimoera manages to do is save Atima. The Dark Emperor himself appears, but when reinforcements arrive for our party, he runs away.

Unfortunately Atima’s parents are still captured, but fortunately the Emperor is still unaware that Dimeora is the hero reborn. The floating fortress moves again, and this time to chase after it we need a boat, which requires a few fetch quests.

With the boat we continued to the next country, of Laa. One thing I noticed at this point is that the combats were getting harder and harder, primarily because my party was missing so often. Katoon, in particular, seemed hardly able to land any hits.

This was especially troublesome in the above boss, who used Gale 2 that does 80 HP to everyone (max HP around 200-250 at this point). I had to fight him several times until finally I just landed enough hits to kill him. There’s a glitch where even though it claims attack up spells can only be used once, you can keep casting them again and again to increase attack — this means you don’t have to land many hits to kill the enemy, but it’s still annoying.

The next dungeon was where I had to quit.  I was missing so often that I could barely get through a random encounter, particularly since the random enemies were now casting Gale 2.  Is this an emulation glitch? This seems unlikely, but no walkthrough pages I saw mentioned this. Many sites seem to think it’s an easy game because of the magic system. But without an instruction booklet, or any good information on the web, I’m not sure what’s going on. By this point I had played about 6 hours of the game so that seemed like a good time to move on, since the PC Engine games are supposed to be side projects anyway. Next up, Cosmic Fantasy 3, which isn’t very good.